The Gaming Show (In My Parent’s Garage)

My ten-year-old daughter loves Minecraft. Like. Looooves Minecraft. She talks about it. All. The. Time. Someone might say that now I ought to know how people feel when I talk about BioWare games all the time, but pfft. Don’t be silly. Everyone loves BioWare. Well, even if I don’t enjoy the incessant Minecraft chatter, as a gaming mom, I am so pleased that my daughter loves gaming as much as I do. She’s even changed her future career plans from fashion designer to game designer. When she’s not playing Minecraft or online games like Animal Jam or watching me play Dragon Age: Inquisition, she’s busy making her own games with GameMaker: Studio. Or she’s watching The Gaming Show (In My Parents’ Garage).

I’m not particularly fond of those Disney or Family Channel teen shows with forced laugh tracks and bad teen acting—things were so much better in my day. (Saved by the Bell was awesome. Shut up.)—but I can tolerate the goofy antics of Jesse Sukunda on The Gaming Show. Jesse is joined in the garage by his friends Julia Schwartz and Ian Duchene. Between the three of them, they cover all the major aspects of gaming. Ian loves the challenges of gaming, and his love of sports games shines through in each episode. Julia loves the art, music, and theatrical aspects of gaming, and Jesse loves, well, everything. His adventures are featured most prominently as he explores various aspects of game design, from graphics to voice acting, and tries out different gaming experiences. The kids often leave the garage to explore the behind the scenes of gaming and even visit celebrities and their families for different gaming perspectives and reviews. Sometimes, they even get to hang out with actual (virtual) gaming characters, such as Super Mario himself. 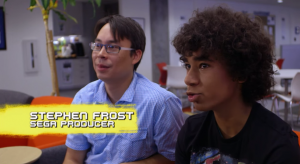 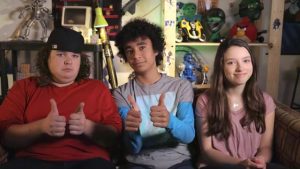 In just 30 minutes, the show covers quite a lot of ground, all of which keeps my daughter’s rapt attention. The fact that they include a segment on Minecraft and host their own Minecraft server also keeps her tuning in.

All of the latest episodes are available on The Gaming Show website, and they have their very own game, aptly named The Gaming Game, that visitors can play for free.

As a parent, I appreciate when my kids’ entertainment comes with a significant educational component. The Gaming Show not only promotes all the fun aspects of gaming, it also offers a lot of information for budding game developers. I also love that it breaks down the stereotypes that plague the industry by simply offering kids a chance to see and enjoy a fun past time from many different perspectives. The Gaming Show is definitely doing something right; it has a 2015 nomination for Best Children’s or Youth Non-Fiction Program at the 3rd Canadian Screen Awards in 2015 to prove it.