Quiet is the single woman combatant in the list of Metal Gear Solid V: The Phantom Pain‘s primary characters. Men outnumber women nine to one in this list, at time of writing, if personality-imprinted AIs count as people (nine to three if not). Other than Paz, the tiny blonde latina beauty who was manipulated into evil and genitally bombed for her troubles, Quiet is the single woman involved in the heavy advertising campaigns for the game. Quiet has normative beauty and sex appeal and she wears a bikini, one opera-length glove, severely ripped tights, boots, and a pouch harness. For soldiering. Naturally this appeared to be sexism. But was it? Yes. Here’s a video that you don’t have to watch.

Quiet strips for us and does a floor routine as her body gets shinier and shinier. This is a video game, but here there is no player — this is a cutscene. A little film. The grizzled protagonist watches, and the game’s consumers watch. More-so than a movie, perhaps they watch with urgency and physical attention, because what if there’s a quicktime event and you have to press buttons so that nobody except your enemies die?

The song that plays is sad, or is it yearning? It doesn’t sound like relief. Nominally what’s happening is, Quiet is celebrating the feel of rain. After the rain stops, she is celebrating the feel of collected water on military tarmac, which is less relatable. She’s wearing a bikini, on a foggy day, on a platform out at sea. She gives no indication of cold. Her movements have been choreographed and motion captured; they are an interpretive dance expressing “thank goodness for water, I’ve been in the desert.” The movement is not innately burlesque, but it’s never outside of burlesque expectation. The direction takes pains to close in and hold on her face as her eyes narrow and her lips are parted–a register of sensuality that’s usually used, on a woman, to suggest and commodify orgasmic pleasure–and her wet, naked buttocks, either side of her tight, slick not-quite-a-thong-but-no-wider-than-three-inches bikini bottom. Her breasts, as they presumably did not during mo-cap, stay forward, rounded, buoyant. Quiet’s ass is what we’re encouraged to look at, the very air we breathe in our varied, fetishistic  patriarchies tells us that shiny wet boobs are eye candy, and Quiet’s routine is produced start to finish with sexual codification. Literally nobody could watch this scene and not understand that it’s wankbait. 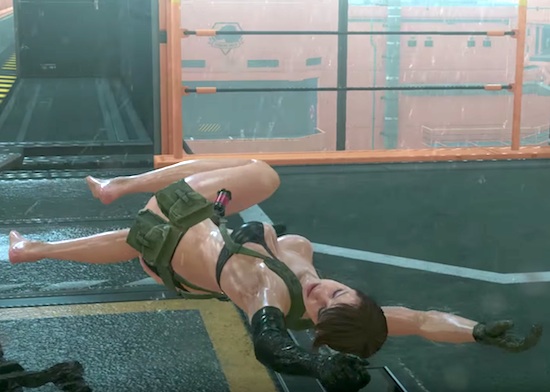 Remember that Quiet’s outfit was supposed to have such a good reason behind it that pre-release criticism would slough away and Metal Gear‘s good name would shine out again like a diamond beacon?

Now Phantom Pain is out, and we know. I have not seen a single person take this news gracefully. Because, obviously, it’s an excuse. Nobody’s interested in excuses. People invested in noting sexism will say “that is an excuse, this design is bad,” people invested in looking at breast skin will say “that’s an excuse, this design is good.” Both parties are already busy, so don’t bore them with weak apologia.

The big secret that we’d all feel embarrassed for doubting was that Quiet’s in a bikini because if she covers her skin she’ll die. Because of … some cruel … nano-science. Skin parasites! “Let’s design a babe who literally CAN NOT wear the usually expected amount of clothing involved in desert warfare!” Okay! Let’s make her really normally pretty! The verbalised narrative will be like “she’s hurt” and the visual narrative will be like “she’s coming to fuck you” and the combined narrative will be philosophy of violence? Remember when we did this with the supermodel war orphans and it was totally deep?? Fuckin’, brilliant, like I will drink to THAT my man.

In this video, uploaded as Quiet’s Ending, you can watch Quiet be dunk-drowned and strangled until her lips go blue and her face stills. You can watch her being murdered. She’s wearing a big coat, open at the top, over her bikini. The person drowning her is an average-sized, in fictional terms, male soldier. The video game producers added dead Quiet’s cleavage to this tableau with a quick upward pan, and then we hear the soldier (the soldier who just murdered her) unzip his trousers. Pan back to Quiet’s face as we, the audience, understand that the man is going to rape the dead woman’s body as we stare at her open eyes. And we’re gonna get to listen! Ohh, the ol’ Kojima bait’n’switch, actually Quiet’s not dead and she totally righteously destroys all of the soldiers who are there. Except our grizzled protagonist. The whole gang of Bad Soldiers! Feminism’s a bitch, fuck yeah! If I’m ever drowned so somebody can rape me, I’ll remember everything I’ve learnt here about anti-grav combat, and win. Quiet gets her bikini back, and a shitload of huge guns, and she’s even found her ripped up tights to put back on too. Glad to know that she’s determined to wear as much as she can even though story-biology demands that she wears little.

In the next scene in that video, the edges of Quiet’s bikini top flip back and forth over where her nipples probably would be, because of wonk graphics or bad breast physics. What’s that bikini made from? Ultra-thin neoprene or something, I guess. After the scene blows up, Quiet’s knocked out and as our grizzled protagonist checks if she’s alive the camera pauses three, four times on dem bewbs. A later scene again and GP’s hands hover over them, around them. She fights his hands away. He wins. The hover again. It’s because he’s helping her, see? Shut up, woman, I’m helping. Shut up, woman, and deal with it. I notice this shit like Snake notices distant guards and CCTV cameras. They’re red flags. Red for danger. Women are in danger when our presence demands a tit-viewing priority. GP holds Quiet’s prostrate body as she has a fit of movement. GP overpowers her again. A guard approaches. Her breasts float around the centre of the screen. Quiet is afraid of a snake that’s already dying, and her rounded breasts catch the light as she draws attention due to her (phallic) fear, and our GP, so manly, fights the snake and wins.

I’m not screencapping all of this. Evidence counts but over-exposure deadens.

Quiet struggles to bring help for our GP but cannot speak English. “Can you repeat in English?!” shouts the so-called help. In the desert. Of Afghanistan. Her breasts stay onscreen, bottom right. As she looks at the sky, doing Metal Gear magic that seems to cause her sadness or pain, to bring the help to our GP, the bare undersides of her breasts are onscreen, in the middle, at the bottom. Her bikini doesn’t hold them up, it holds them closer to her body than they’d otherwise be. Accidental descriptive detail. She’s effectively tied her breasts down, with the tools she has to hand (a bikini, from somewhere), even if she can’t cover them (because she’ll die), and they still move a lot (because of the game’s developers’ priorities). What a miserable woman she must physically be. Can’t put on more clothes. Can’t keep her breasts low-mobility. Also: war, kidnap, etc. Quiet is a support character for the grizzled protagonist–dramatic irony! Quiet has no support.

Remember, this video is called “Quiet’s Ending.” Her triumphant finale is to assimilate perfect grammar-school Queen’s English. On the one hand, ahhh, hooray for cultural imperialism. (NOT!?) On another: ah, just like mine! Now I feel even more like those are my breasts that we’re all either looking at, or choosing not to look at. because Kojima, or Kojima’s shadowy Kona-enemy—and, either way, his team—created them, minimally but compliantly dressed them, and framed them with this direction.

Let’s listen to Quiet’s final tape. Hmm. Okay. Sad, traumatised girl out for revenge, romance-horny for our grizzled protagonist, fading away changed forever by the unparalleled awesomeness of our dude, Big Boss, the corrupt and militaristic villain of the first Metal Gear game. Heavens praise his divine cool–and hotness!

Quiet has unlockable costumes such as this Sniper Wolf one, which she’s not “really” wearing when you play with it engaged because, as discussed, she’d die. (Like Sniper Wolf did.) Meta-eroticism? I don’t know why this outfit is indicated by a deep v boob shot, when that’s the only part of this costume that has something in common with her regular one. It’s not, at this point, a unique draw.

Quiet also has unlockable costumes that riff on Carrie, if I’m generous, and Goldfinger. Because Quiet’s already a riff on Goldfinger, right? Get it? “Your skin has to breathe?” Ha ha ha! Dead gold naked women. Pretty bodies in bikinis and blood all over. Bloody boobs means sexy lube. God, I’m so aroused right now. She’ll wear these for (explicitly, for) you, if you play the game in this way or that. If I play the game she will wear these for me. I’m not entirely comfortable with that. I do not want people to cover themselves with sticky liquids for my honour. I don’t want people to angle for my awareness via unsolicited battlefield eroticism. I just don’t really want women to need to appear viscous in order to matter.

Look mate, Kojima, Shinkawa, Mr Konami, whoever. Can you not just, I don’t know.