Play to Date: Fallout is on Tinder

Welcome to my new miniseries, Play to Date, in which we discuss the strange, perhaps upsetting, perhaps useful overlap of dating and gaming. Have your own dating/gaming anecdotes? I’d love to hear them.

This first installation basically wrote itself. There I was, swiping through all of the available gay ladies on Tinder while I played Sims on my laptop, my new cat sitting just out of reach of my love. Real winning portrait of the ambitious, lovelorn millennial, folks. As will become apparent in future episodes of this column, I have a messy relationship with Tinder. I have to watch myself or it becomes a game.

So there I am, swiping for “love,” when BAM, Fallout is on Tinder: 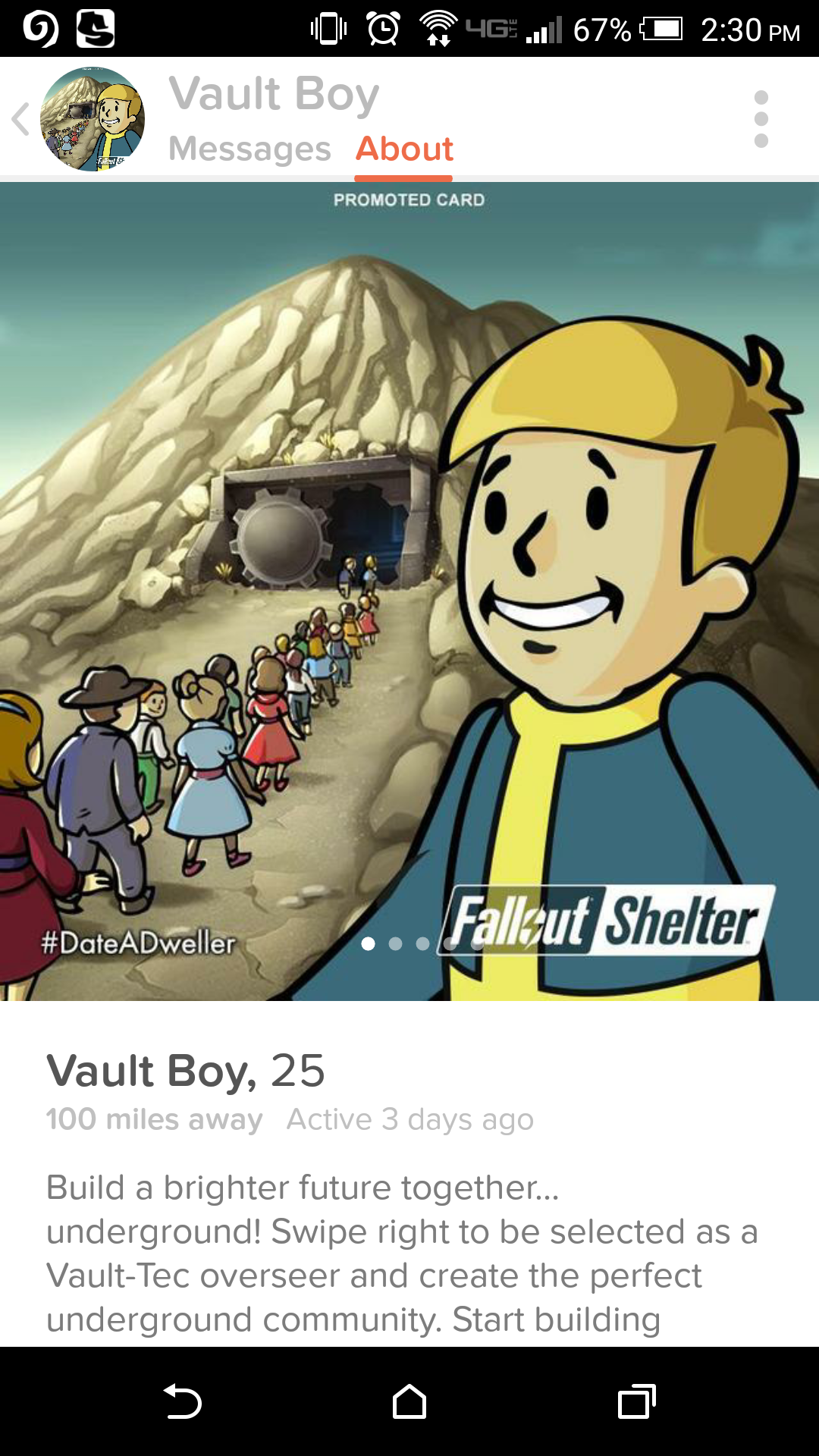 Or more specifically, Bethesda’s new phone game, Fallout Shelter. Now, I had a few simultaneous reactions. First, I’m gay, but I get it. The Vault Boy is their mascot, it’s not the Vault Girl. That being said, were I straight, I’d not date someone who described their age in child terms, “boy.”

But, let’s be honest, I was intrigued. He had more photos than most people on Tinder are willing to put up, displaying an array of interests.

A closer look at the profile description: 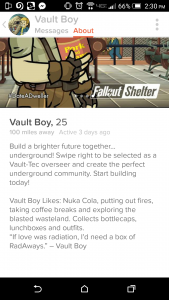 Ok, so better than most Tinder profiles I’ve come across. (The “cool” thing to do now seems to be just a list of emojis. Maybe that’s how I know we’re not compatible right away.) But it also reads like a job ad. Or a dating ad for preppers, ready to repopulate the world.

This seems like clever marketing to me. People are bored, playing the dating game, swiping through dozens of people that they have nothing in common with, and then an alternative! You don’t need a date! You need more point and click games to fill up your time! I only think it would be more fitting on LinkedIn than Tinder. Need a job, Recent Graduate with no future prospects? Here, run a Vault! It’ll look great on your resume!

When I came across this ad, I had already developed a modest vault of my own: 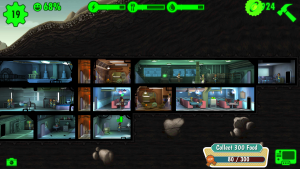 Had I not just downloaded Fallout Shelter a day earlier, I may have been convinced by this ad. It’s much more clever than the “look at these model’s boobs, come play our game” technique. On a very serious note, this game is actually quite good. The pacing is a little slow, but everything else has been so enjoyable. The graphics are exactly what you’d expect from Bethesda, the system is well thought-out and balanced. It’s challenging, but not mindnumbingly hard.

I am willing to accept the job, but the romance just won’t work out: 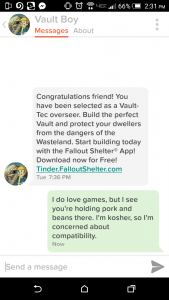 So, friends, what do you think? Persuasive? Tune in next time when we discuss romance as a form of gambling. Have game related dating stories? Send them to me!

Read the rest of the Play to Date series.