Board games are having a bit of a moment right now. In geek circles, Wil Wheaton has his show “Tabletop” on Geek & Sundry where he plays tabletop games with friends; new and interesting games are coming out all of the time, and it’s even making the news. With all the focus on board gaming even within admittedly niche circles, I’ve found myself getting really into them thanks to some lovely friends and an especially eager boyfriend.

So when I met my boyfriend and he said he was really into board games, I was a little apprehensive. I mean I generally liked board games but how much time were we going to spend playing them? He’s a really patient person to play with and super easy going so it’s fun to learn new games with him. Luckily, it’s worked out so far and I’ve come to really enjoy a lot the games we play. Another amazing thing is that we have not yet gotten into a big fight over the playing or outcome of a game. That’s victory right there. I have some family members who cannot play Scrabble together without it being a detriment to their marriage. I say we’re doing ok so far.

I like learning new games and I like even more how they challenge me to actually use my brain. Being a firm believer in the idea of lifelong education, it’s good to force myself into trying new things. Strategy and tactics–and tact for that matter–are not my strengths, but learning a new game forces me to fight against my natural impulse of quitting when something is too hard. I learned the trick of many high achieving kids in middle and high school and put it to good use: only do the things that you either have natural talent for or can learn with a minimum amount of effort. It makes you look really great because you’re only really trying the activities you know you can succeed at. It’s fine for school but not so great for life. So board games make me try when otherwise I would quit.

It doesn’t always work at first because, honestly, trying is hard. It sucks to feel like you aren’t good at something, and I don’t always want my free time to feel like work. If it’s a complicated game I’ll spend the first half being frustrated, annoyed, and mostly confused. I have to fight the tendency to bitch about the complicated rules or pretend I’m above this game when it’s just really that I don’t understand. Then I’ll finally relax in to it, the rules will click, and I’ll be saying, “When can we play this again?”

My personal history with games consists of a lot of basic family games like Sorry! and Monopoly, and card games like Rook and Euchre. We had a few computer games in a one-color-Commodore-computer sort of way but never any console video games. I dabbled with Ticket to Ride post-college while others were playing Settlers of Catan. I could never get into Catan because it seemed boring. I have heard that a lot of people get started on popular Euro games and other board games through Catan, but I just haven’t been able to. Even now, after playing more games with my boyfriend and friends, it doesn’t hold too much appeal. Maybe I’m being a games hipster? Maybe it will be my white whale and I’ll search a lifetime for the desire to play it? Who knows. I’m sure I will sometime, but until then the Boyfriend and I are going to play some other games.

In deciding what to play for this column The Boyfriend (hereafter referred to as TB, like tuberculosis, but in a loving way) explained some various types of board games. There are so many different kinds of board games out today and often fall into these broad categories, but not always. This is my understanding of the categories:

I had never played a collaborative game before so we decided on that and we picked Pandemic. TB said it was, “entry level, but would still give me cred in the board gaming world.” Board gaming world cred is not something I’m particularly worried about, but I’ll take it. TB did warn me before we started that the game was “stressful.” We took a brief break in rule explanation for me to mix up some ginger-maple-lime-bourbon cocktail experiments.

I felt much braver afterwards.

The basic jist of Pandemic is that you and the people you are playing with all have different roles and you must work together to stop pandemics of four different diseases from breaking out all over the world. The game board is a big map with lots of different cities on it. They are color coded loosely by region with four big diseases based there: blue, black, red, and yellow. To win you have to cure, eradicate, and clear the board of all four diseases before there are eight outbreaks of the disease. You work together with the people that you are playing with to move to cities, cure diseases, and trade cards.

When you set up you draw cards to determine where the diseases start and how concentrated they are. You place little disease cubes on the cities that are infected. A city can only handle three disease cubes before there is an outbreak and outbreaks are very, very bad. They are what you have to avoid in order to win the game and save the world. Then you are assigned a role with special abilities and keep a hand of seven city cards. Every round you get to do four different actions like moving to another city, removing a disease cube, trading a card with another player, or curing a disease, and some other options. Curing a disease means collecting five city cards of all the same disease color (blue, black, red, and yellow) and using a turn to fill them in.

So far so good, right? Well sort of. Here’s where it starts to get nerve wracking: epidemic cards. It all seems like it goes pretty easily until you add in the epidemic cards in the draw pile. When one of those cards comes up you have to immediately draw more city cards to infect and add disease cubes. The catch is that each city can only have 3 disease cubes. If there’s more than that? That’s bad news. That’s an outbreak and you have to infect all the cities that touch the outbreak city. If those cities have three cubes? More outbreaks in chain reactions. And the infected city cards get recycled so there are chances that cities will be infected multiple times in the same game. This means you are basically fucked.

And this is where it gets stressful. The epidemic cards are fairly evenly spaced out in the draw pile but you still don’t know when they are going to turn up. Then it’s a race against the draw pile to cure and eradicate all the diseases before more epidemics and outbreaks start.

It is fun, but once you get into it the stakes seem so high!

There are other important details. There are some special action cards–like an airlift that you or another player can use to go to another city or a card that prevents new infections for one round.

Now let’s talk about whether it was fun: it totally was! It helped that we had some drinks and played our hands face up to better facilitate cooperation. We also played on “introductory” difficulty level, meaning there is a chance for only four epidemics as opposed to more. I wanted to start with “Standard” but TB gave me a look that said, You really don’t to do that.  So I acquiesced. It had just the right amount of game stress with the fear of epidemics and outbreaks popping up. It wasn’t stressful because I didn’t know what I was doing, but because somehow the stakes were so high. The fate of the whole world was hanging in the balance. Or at least the fate of all the cities listed on the world. Maybe people in remote climes would have survived if TB and I did not win.

But we did win, because we are great. 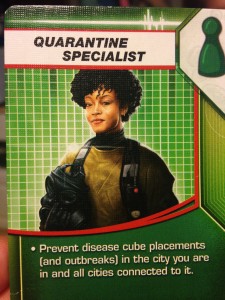 This was me: kicking ass and saving lives.

I also want to be sure to mention that the randomly assigned roles were really fun to use. I was pretty nervous that all the roles were going to be white dudes but they were not. There are seven roles included in the game and three are women. There are also at least three People of Color. I got to play as the black lady quarantine specialist and TB as the white lady scientist.

Who save the world? Girls.

So if you’re looking for a great game to add some drama to your next gathering of 2 – 4 friends, check out Pandemic. It’s a great game to work together and do some sweet-ass science saving the world.

Finally: I made a recording of the game TB and I played so I didn’t have to take notes, and listening to it was delightful. Here’s a gem from our game play:

Me: Do you lose if you develop smallpox?

TB: You can’t actually get sick in the game.

Me: Right. But what if I get smallpox in real life?

TB: We should probably go to the doctor.

Me: Will you still love me if I get smallpox on my face and get horribly scarred?

Me: Remember this is being recorded!

Next month? I did recently play Terra Mystica. It took my friends AN HOUR to explain the rules to us. An HOUR for the RULES. It almost killed me. Until then, what are you playing?