Happy hump day, gaming friends!  If you’re tied up with work and need a little game fix to tide you over to the weekend, I’m happy to oblige. Step right this way.

The Flock will only be playable to a limited time, but not for the reason you think

The Flock is first-person PC horror game, where players are hunters making up the Flock. The game will have a depleting in-game population. As player die, a life will be taken out of the population so when it hits zero, the game will no longer be available to buy. It’s still gimmicky, but since it’s an actual game mechanic, I’ll let it pass.

Long-standing developers at Nintendo, both Kyogoky and Tabata are asked pointed questions about being a female developer at Nintendo and if they have a message to women who want to work in the games industry. Absolutely worth a watch.

Some fans may not be having the anticipated “OMG I’m so excited!” reaction to the announcement of a new Futurama mobile game. Since the game website leaves no details about the game, I can’t say I really blame them. Arguments about cost drown out when people have an actual game to get excited about versus an empty announcement.

This has been a popular one this week, but just in case you missed it. A scientific study was recently published investigating the reasons behind sexist behavior online. The study found that men who were performing poorly in-game were more likely to be antagonistic towards a female player, using it as a way to increase their status. Yay science! 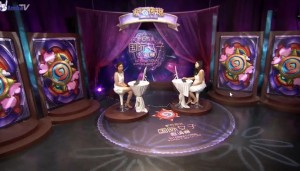 I often wonder why there aren’t more women in esports and this could be one of the reasons why. Instead of treating these amazing top Hearthstone players as competitors, the set and wardrobe made they look like their gaming skill was secondary to looking pretty. Wake up, esports! This is not the way to recruit players or attract female fans.

That’s it for this week. For me, I’m so excited! My new binary dice came in and I can’t wait to play with them. Are you looking for something unique to play? Check out our review of Her Story.  Feel free to share what you’re excited to play in the comments. Til next week, game on.