Choose Your Own Space-Shag – Boy Love in Starfighter: Eclipse 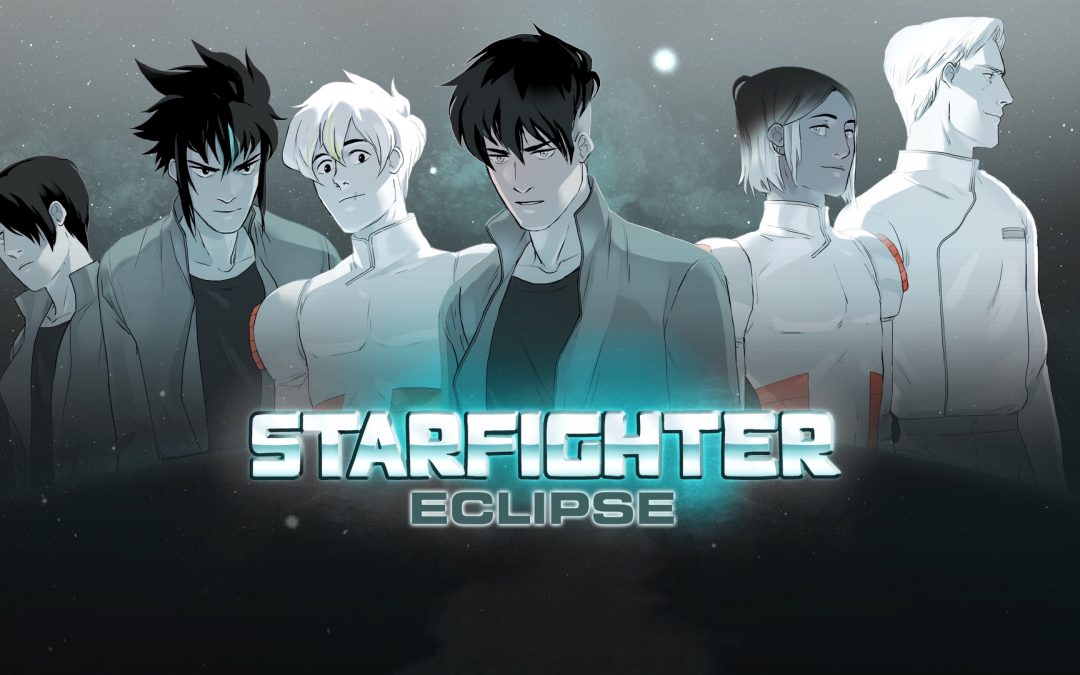 Developed by Date Nighto & NightmareLand Games
Based on Starfighter, webcomic series by Hamlet Machine
Released 21 May 2015
Rated “Adult Only”

Reviewed with a review copy provided by Date Nighto. WWAC Member Jo Fu works with Date Nighto, but had no involvement with this review.

I stumbled upon Starfighter few months ago and fell in lust almost instantly. Starfigher is a yaoi (boy x boy) 18+ webcomic by Hamlet Machine, set in a sci-fi universe of galactic dog-fighting and pesky aliens that want humans all extinct. The story centres around Cain and Abel, Fighter and Navigator respectively, as a team of Starfighters who get along above and beyond the call of duty. I’ve always liked Starfighter for the raw, frenzied passion between Cain and Abel. They start out as just being frustrated enough to sleep together, but really grow into just needing each other. 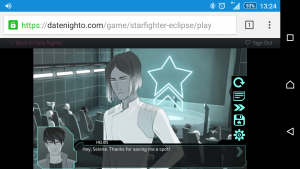 On larger phones, the browser bar won’t be a big issue, but smaller phones will suffer from Tiny Screen Syndrome.

So, Date Nighto and Hamlet teaming up to bring us interactive yaoi smuttiness? Uh, yes please! Date Nighto is a game company that specialises in visual novels and delivers them with their own htmlVN engine. This engine was designed to work in almost any modern web browser and any device that supports them. This means all of the games are compatible with PC, Mac, Android, iPhone, etc. all from their web browsers. Save files are stored on the cloud, so you can pick up on your phone where you left off on the PC. This means no downloading programs or apps, no remembering to sync your devices, no having just that ONE device that’s not going to work. As long as it’s a modern browser, it’ll probably work. (I can’t attest to Windows Phones, unfortunately. The site does not explicitly list Windows Phone as compatible, so it would need verifying.)

Let’s get one thing straight first though—I don’t recommend playing this on your phone, especially in public. Holy hell, don’t do that. This game is 18+, just like the webcomic. There isn’t any voice acting, so you don’t have to worry about moans escaping your device, but it’s still explicit. The other thing I found is that, on your phone, the web browser bar can take up a lot of space. Larger phones like the Galaxy Note range or the iPhone 6 Plus won’t have such an issue, but my Xperia Z1 just made the screen too small. I imagine on a tablet, though, that it’ll be a negligible loss of pixel real estate.

But let’s get to what you wanted! The porn! The story! You play the role of Helios, a new Fighter pilot who is joining the Kepler battleship after his sister, also a Fighter, has gone missing in action. Before you even get onto the ship and find your Navigator, you are provided with choices to establish just what kind of guy Helios is—is he nice, or is he a bit of a cocky douchebag? I liked this because, even though it seemed like a small choice, it really helped you feel more like you had a say in who Helios was, rather than just following him around. Being the person I am, I opted for Nice-Guy Helios on my first round. So my options are to be a nice guy, a jerk, or a shameless flirt. Got it.

After a couple choice-driven encounters, you meet Selene, your Navigator and partner. One of Starfighter’s main relationship-builders is the team system. All Fighters and Navigators are paired up into compatible teams and rely on each other to complete their missions and stay alive, like a life-or-death matchmaker service. Now that our main pairing has met, you have further opportunities to be Nice-Guy Helios or Douchebag Helios to Selene. I continued my venture as Nice-Guy Helios – I wanted to get laid, after all.

It’s obvious fairly early that Selene is your “default” romantic interest, as most visual novels tend to present. But Selene is not your only option, which I did not know when I started the game – variety is always a welcome introduction, especially when some of them are favourite characters of the comic.

In terms of the gameplay, it’s fairly common visual novel territory—character on the screen, background behind, text on the bottom, choices pop up. The visuals are true to the comic in terms of palette and stylisation. The colours are mostly monochromatic with spot colours peeking through here and there, and the drawings themselves are well done. The characters themselves don’t have animation when on-screen, but the background sometimes have little special effects dotted around – not static, but not distracting either. The sex scenes (have I mentioned this is 18+ yet??) are composed well and everyone looks like they are thoroughly enjoying themselves, while the scenes are diverse from each other. Finally, someone recognises my cuteness! I believe the term is “adorkable.”

The “romance” in the game has a narrative backdrop—we’re not in space just to shag, after all! Without spoiling anything, I will say that it involves an abandoned alien ship, Helios’ missing sister, and will probably involve you dying quite a bit. Oh yes, it’s one of those games. This ain’t Tokimeki Memorial, people! I suggest you acquaint yourself well with the Save button, because the are a number of Game Over spots.

But you want to know about the romance, right? There are five potential beaus for the bedding. Some are fairly straight-forward to achieve, and others are frustrating as hell, i.e., I ended up having to Google it. I was not alone on that one either. The choices also branch—sometimes choosing one choice keeps you from another story path. This gives the game more replayability, as you will absolutely have to replay again to get all of the unlockable pictures from one romance, let alone the rest of them. You can also find yourself in places you didn’t expect. For example, on my second playthrough, I tried to to unlock all of the photos for Selene and somehow ended up getting banged by my commanding officer. I didn’t even know he was an option! (I should have known though, to be honest). Oddly enough, this is not the preamble to a sex scene!

In terms of the relationships, I was pleased that all of them were consensual. There is always a choice—if you find yourself going down a story path you’re not comfortable with, you can flat-out say no and walk away. There was a moment when a character whom was not acting themselves came on very strongly, but even then, the story pointed out that something wasn’t right and did not take advantage. The dynamic of the couplings was also varied—okay, I mean that sometimes Helios tops and sometimes he bottoms. There, I said it! I’m sure some people won’t like that you don’t choose or would want him to be only one way or the other, but the dynamic makes sense for each coupling (though one surprised me). Personally, I’m a fan of a switch, so it worked well for me. Variety, whee! How did these women get on my ship? I was told this cruise was a sausage fest.

For those that read the comic, a few questions are raised. Luckily, I can answer most of those for you. Hamlet Machine has confirmed that the game takes place in an Alternate Universe to the webcomic. As such, neither the game nor comic spoils the other, and you don’t have to worry about intervening with established relationships. Also, WOMEN! In the comic so far, there has been a distinct lack of women. We’ve only seen Abel’s mother in a dream and then Mother, the group of oracle-like women that feed orders to the fleet. Eclipse shows us women in the fleet: maintenance engineers, Navigators and Fighters. While it was nice to see, I’m not clear on whether women in the fleet is innate to the Starfighter universe or just part of Eclipse’s narrative.

There are a few pitfalls, but they’re not major. For instance, there were some points where the sound effects and background music didn’t mix well, even though they had the same levels in the settings. The Save/Load buttons could be more distinct from each other. There was more than once that I meant to load a file and instead saved over it. Luckily, I keep multiple saves, but if you’re a one-save kind of person, be very mindful. I’ll also admit—I was able to run through most of the game in four hours. Granted, that was me being very tenacious and skipping repeat dialogue—I wanted all the nookie! For a mobile game, that’s not bad at all. For a PC game, it’s a bit short. There are also the disadvantages that come with cloud-based computing—you can’t play offline, as everything is done in the cloud, so you won’t be using this for your long-flight fodder.

All in all, I really enjoyed the game. It was a nice break from the cookie-cutter dating games I’ve run into in the past and it brought a comic I enjoy to life in a new way. I’d really love if the game were a bit longer, but it does have to end at some point, right? (Lies!) And the fact that most of my devices, if not all, are and will remain compatible is a definite plus.

BONUS – Highlights of my live notes as I played! (Spoilers removed or redacted)