“There Can Never Be Too Many Games”: Kitfox Games’ Tanya Short

During my recent visit to Stage Select, Toronto’s new gaming convention, I caught the tail end of the keynote address from  Tanya X. Short, Creative Director of Kitfox Games. Along with Tanya, Xin Ran Liu, Mike Ditchburn, Jongwoo Kim, and Ryan Roth have combined their years of gaming industry expertise to create Shattered Planet, a survival adventure game where players can “punch aliens… for science,” and the “myth-weaving RPG” Moon Hunters (above).

During the Stage Select question and answer period, Tanya offered advice to potential future game developers on networking, market research, and kickstarting their projects. The latter is an area where Tanya has garnered much expertise thanks to a Kickstarter that earned almost 400% of its funding from over 6,000 fans. Working within the Square Enix Collective, Moon Hunters is an exciting success story, but Tanya stresses that failed crowd funding projects are just as important as learning tools, if not more so.

“It’s a common mistake of any industry to focus on the successes,” she notes, and warns against the survivorship bias such a practice creates. 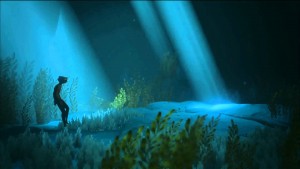 She also feels that, though there are a lot of games out there now, as her keynote implied, there is still room for many more, and encourages developers and the “game curious” to keep at it. She is pleased to see how far indie games have come and got to witness this at her first visit to the recent E3 Expo. The gaming convention remains heavily focused on commercialized AAA games, with an entire hall dedicated to big cars and big guns, but Tanya was pleasantly surprised to find that she didn’t feel actively alienated as both an indie game developer and a gamer. Though a bit harder to find, indie games were still well represented at E3, with big names like Sony and Microsoft also promoting smaller developers. She had a chance to play ABZU, an underwater exploration game from Giant Squid, a company co-founded by the art director of Journey. As with Journey, ABZU features opportunities for players to move around and connect with the game’s beautiful environment. She was curious about the metal space scarab you play as in the “rhythm violence” game called Thumper by Drool, but mostly Tanya was busy promoting Moon Hunters, talking to gamers, raising awareness, and seeking advice from other developers.

“I’m glad our industry has such variety,” says Tanya. “As a consumer and creator, AAA games are not for me, but that’s okay.”

It might seem like that variety has saturated the market, especially with the availability of thousands of apps. Some players and developers alike have been sounding the alarm, but as far as Tanya is concerned, “more creators means more kinds of games and a healthier environment overall.” She notes that the majority of the games now are still made by the same kind of people — the stereotype of the white male programmer with the nerdy personality still prevails, but we’re starting to see the sparks of new ideas and perspectives than what the gaming community is used to.

What kind of games would Tanya like to see within the industry? “Everything!” she says excitedly. What kind of game would a sports-crazy black trans woman want to make, she wonders. By encouraging developers from different walks of life, the possibilities are endless. This is where Pixelles.ca comes in. Co-founded by Tanya and Rebecca Cohen Palacios, Pixelles began in November 2012 as two women trying to help other women who were curious about game development. They were approached by Feminists in Games (Toronto) and hosted their first “Difference Engine Initiative” incubator in 2013, which had an overwhelmingly positive response from both participants and people in the industry who want to support the project and up and coming female developers. Though Pixelles is based in Montreal along with KitFox Games, the mentorship program expands into the virtual realm and invites any game curious women to participate.

“[Pixelles] is less about changing the industry than it is about changing the perception of gaming as an art form,” says Tanya, who will occasionally lend her time as a mentor in the program when not busy working on Moon Hunters, Shattered Planet, and the secret plans in the works for KitFox’s next game.

Judging by her bio and portfolio, Tanya seems like the kind of woman who knows what she wants and finds a way to obtain it through hard work and determination. Her focus and drive are very impressive, but I was compelled to ask for advice for people who are not quite as confident in their own ability, but still want to follow this dream (like my nine year old daughter, who was too shy to chat with Tanya via Skype with me). After much thought, Tanya said that “the number one thing I try not to do is compare myself to anyone else. This is a treacherous path and so much productivity can be lost from thinking ‘Why haven’t I done that?'” It’s human nature to compare yourself to the best and worst of others, but, according to Tanya, it’s very important to consider who those people are and what their story is. Tanya’s experience within the industry, working on games like The Secret World and Age of Conan, and the examples in her portfolio, are only the end result. We don’t see the hundreds of hours that go on behind the scenes.

“Be inspired by others,” she advises, but warns of the dangers and pitfalls of not focusing on your own thing.