Barbie, Or How I Learned to Tell Stories

Welcome to WWAC Game Section’s summer Barbie series. These months are often the time that children are free from commitments, away from their friends, and ready to let their imaginations take over. For many of us that meant playing with Barbies, and over the next few weeks you’ll see the many different ways Barbies affected us. Enjoy!

I like to consider myself a writer. My novel is still a work in progress and I’ve received more rejections than not, but I am still a writer. I feel compelled to tell stories and want to share them with the world. (Plus, there’s all the writing I do here of course.) And oftentimes you see writers talk about how they’ve always been writing – how they always had a notebook or a journal, and it was always obvious to them and everyone around them that they would be a writer. 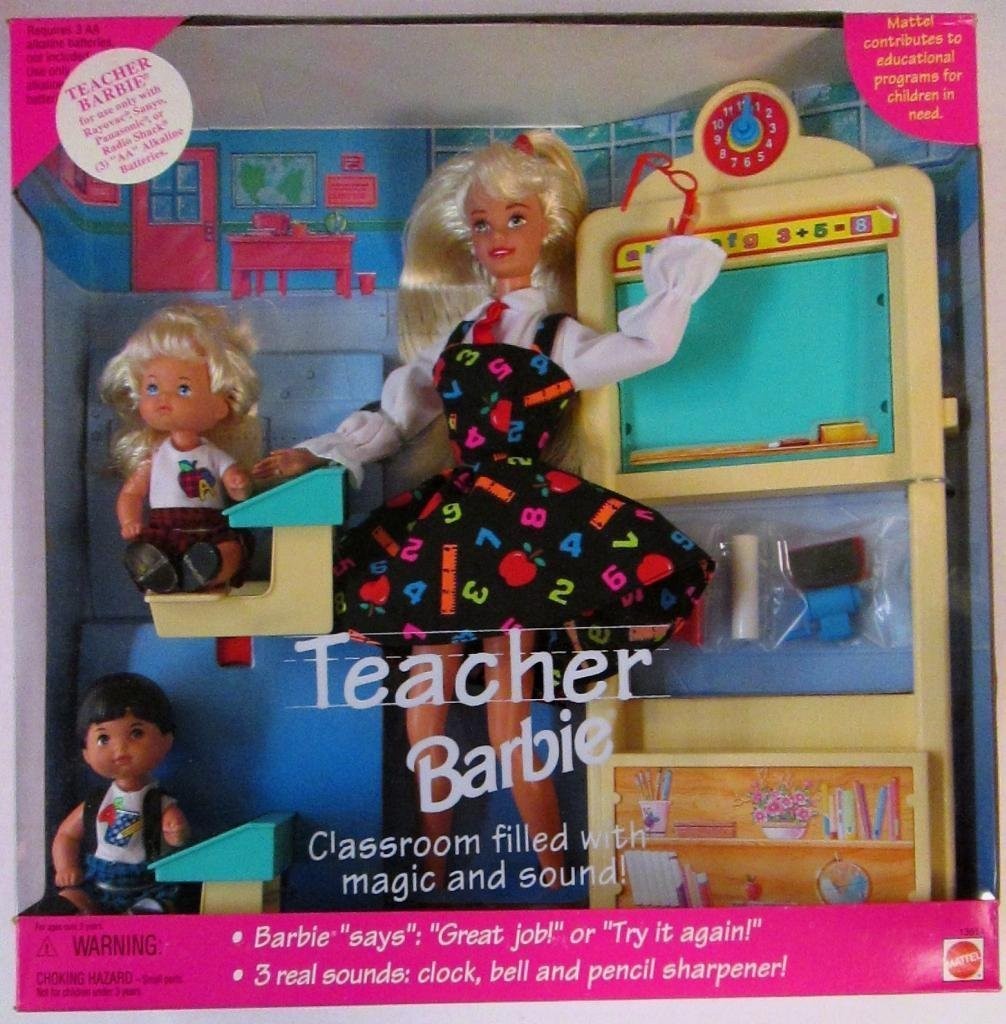 I can’t say that. Sure once I was in school I wrote the occasional story for class and I even attempted a novel once in high school, but I didn’t have that conviction to write all the time. However, I would argue that, even though I wasn’t putting pencil/crayon to paper, the seed for my love of storytelling was sown early. And it was able to grow because of Barbie.

My mom got rid of my Barbies a long time ago, but I can still remember them perfectly. I kept the dolls and all of their accessories in a big pink Rubbermaid tub and when I wanted to play with them I would dump the entire thing out at once onto the floor. It didn’t matter what accessory was supposed to go with what, or which dolls came from the same set. In order to play properly I needed them all out.

For example, I was the proud owner of Teacher Barbie, who came with a couple of students and desks, a “talking” blackboard, and even a pencil sharpener. Each of my student dolls would have their own complex family systems, there would be “scandalous” schoolyard drama and more. It was like a G-rated Degrassi special.

And then there were the weddings. Only one of my Barbies had a wedding dress, but that didn’t stop me. Weddings were a regular occurrence during playtime. My weddings weren’t all happy endings and confetti,

though. More often than not one of the brides would run away in the Dream Car, or another Barbie would burst in and declare their love for one of the other brides (and yes, it was almost always two brides. Perhaps an early sign that my own sexual identity wasn’t going to fall under the “assumed” parameters, or perhaps because I only had Sun Sensation Ken and I decided pretty early on that he wasn’t interested in my lady Barbies).

My Barbie play times were always a little dramatic and unbelievable, but they were the earliest stories I remember telling. Barbie, despite all its many controversies, gave me and other kids who are visual and tactile learners the opportunity to learn how to construct complex storytelling skills. Which is an extremely important set of skills to have. Developing them early on can also help kids develop strong communication skills, increase their ability to empathize, and stimulate the creative areas of their brain. It can even build confidence in group settings if these storytelling adventures take place with parents or other children.

I by no means think Barbie is a perfect toy. Her design often reenforces unrealistic body standards and the cost of her different versions and accessories is not the most economical. And that’s not even counting the really troubling versions Mattel has created over the years (anyone remember Oreo Barbie?) But nevertheless I can’t deny the significant impact her presence had on my life. My pink rubbermaid tub, filled with waxy long hair and a rainbow of high heels, was more than just plastic toys. It was doorway to what would eventually become one of the most defining elements of my adult life. And for that, I am grateful.