Game Diary: How to Make a Dating Sim in a Month

All through the month of June, my partner and I are creating a dating sim for the International Love Ultimatum Gamejam (#ilujam on Twitter and Tumblr). Want to know what goes into making a video game? I’ll be posting weekly updates in a structured development blog here.

This week: Why are games so hard?—the role of a game producer.

Games are hard to make. Writing, art, styling, and coding have to come together as a unified whole, often with a development timeline that forces passionate game developers to work ceaselessly for months on end. This is called “crunch,” and while other industries have equivalents (teachers before finals, comics creators before deadlines), the AAA games industry pressures itself to release bigger, more robust, and more feature-rich games, which results in grueling periods of crunch and many veteran developers abandoning the field in favor of… having a life. Kotaku’s Jason Schreier filed an in-depth investigative report on the horrors of crunch which I highly recommend.

In the world of video games, many producers and directors see mandatory overtime not as a contingency plan but as a natural part of game development, to be regularly used as a way to cut costs and make the most ambitious games on the shortest schedules.

Quite frankly, that sucks! As a game producer for a small game company called Date Nighto, making sure my creative and technical teams are happy and healthy are my top priorities. But when it comes down to it, games are hard. And for the next month, we’ll be exploring why, as my partner Conrad Kreyling and I make a short dating sim called Beach Island.

(Full disclosure: Date Nighto games may be reviewed by Women Write About Comics, but never by me, and I will never see or influence advanced reviews before publication.)

What’s the most important part of games development? From the outside, it may seem like the coding bits, which you need a lot of training for. Then again, art and technical art (the act of integrating art with code) is time-consuming as well! But to me, a new producer, the most important part is planning. Even though it’s small, I’ve divided the planning for our #ilujam game into three parts: limitations, resources, and timing.

The biggest and most obvious limitation is time, but I also have a full-time job to contend with, and Conrad is often overtasked with the day-to-day pressures of running a game company. A one-month deadline is not the most grueling pace; oftentimes, you’ll see gamejams run for one weekend only, on-site, where groups of game developers work nonstop to push as complete a game as possible.

That’s the beauty of a gamejam, though: an imposed limitation puts normal game development on a smaller scale, and forces the processes—coding, writing, art—to become more streamlined and more raw. To see how these games usually turn out, check out some entries from the recently-ended Ludum Dare GameJam, whose theme was “An Unconventional Weapon.”

Conrad is a programmer. I’m a project manager who moonlights as a writer. If you’ll note, neither of us is an artist, and we’re making a dating sim.

While #ilujam’s rules state that the game you make does not need a visual element, our game company prides itself on quality visual novels, so we’re staying in our wheelhouse. However, this means we’re depending on our limited artistic abilities for the art assets of the game: I’m designing and drawing sprites, and Conrad is making backgrounds and designing the user interface (UI).

The UI for a visual novel seems simple, but is actually a negotiation between game and player: how can the game makers display information in a way that players feel comfortable with? This question is hard, and I’m happy to cede responsibility for designing it. 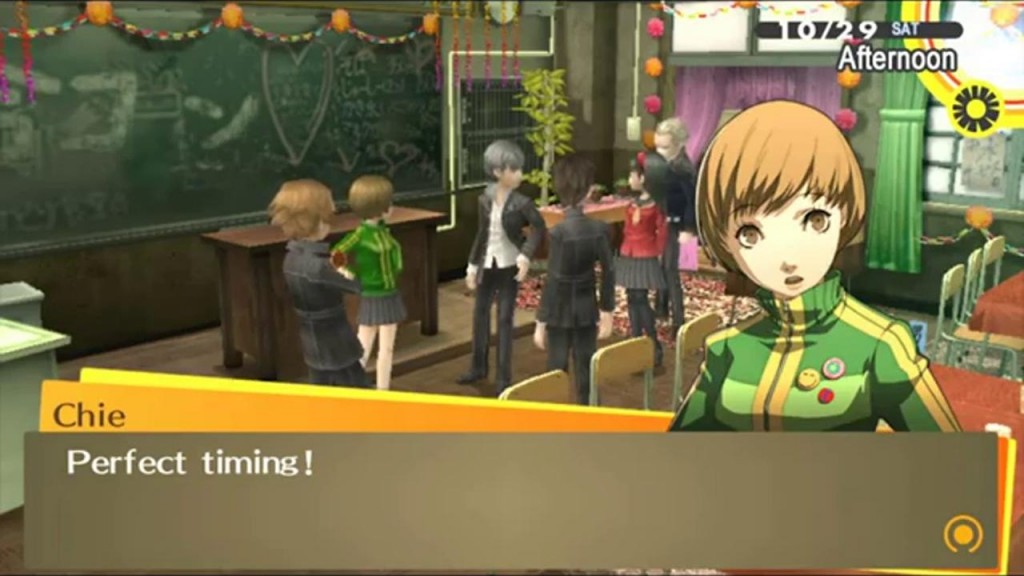 An example of visual novel UI from Persona 4.

When you’re on a deadline (and commercial game developers are always on deadline), coordinating the disparate parts of a game is an art form. Anyone who herds ducks for a living—editors, project managers, producers—knows the anxiety of maintaining a carefully-timed calendar that is always subject to change. Workers go on vacation, or fall sick, or get overloaded and just need a break.

If you take one thing away from Kotaku’s article on crunch, it’s this: crunch isn’t sustainable. There’s nothing so elevated about video games that suggests that developers (and the other hard workers involved in making games) don’t deserve satisfying lives—outside of work. I like designing my production calendars around my coworkers’ lives, not in spite of them. That being said, here is the production schedule for Beach Island:

A month is not a long time. I hope you continue following our story here at WWAC, where we’ll be talking to visual novel creators about the difficulties of their jobs, in parallel with the story of Beach Island’s development. Stay tuned!

Read the rest of the How to Make a Dating Sim in a Month series.