I’m not sure how I stumbled upon Stage Select, Toronto’s newest pop culture convention, but stumble I did, and dragged along my friend Trisha, my nephew Brandon, and his girlfriend Nadia. I purchased tickets well in advance, watching the fledgling convention’s website slowly build up its following and its program. Trisha and I are convention veterans, with her frequenting cons around the continent to display her art, and me working almost every year with Fan Expo Canada, but this was a first for Brandon and Nadia. We thought it best to break them into the convention world with something small and welcoming. Stage Select provided the perfect opportunity to introduce them both to the convention world, and to further Nadia’s induction into gaming.

Stage Select describes itself as “a unique, inclusive, and exciting environment for gamers, developers and enthusiasts of all types.” The fandom event offers an array of programming to cater to various areas of interest. “No two games are exactly alike and gamers thrive on this diversity in playing options.” 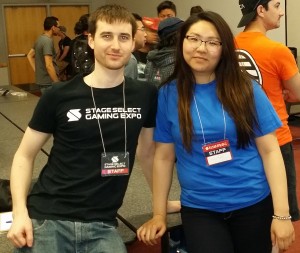 The masterminds behind Stage Select, John-Paul Caldwell and Christine Kim

During a moment of relative peace and quiet, I managed to catch John-Paul Caldwell, Stage Select’s CEO—though he hates how suit-and-tie that title sounds. Stage Select is meant to offer a more welcoming and relaxing environment for fandom than bigger cons, and when Caldwell speaks to members of the gaming community and developers, he doesn’t want to sound too corporate. Involving AAA developers and sponsorship is potentially part of the convention’s future plans, but Caldwell stresses that Stage Select does not focus on the money. Caldwell and his team carefully manage the event to ensure its continued accessibility to indie developers.

We were joined by Caldwell’s partner, Christine Kim, who handles graphics work and has many connections within the industry. Her role also focuses on the introduction of diversity. “We put a lot of forethought into making sure diverse groups are represented. This is reflected in their choice of speakers and vendors, and they spotlight people who would have greater difficulty breaking into the gaming industry.

Brandon, Trisha, Nadia, and I stopped in to hear the keynote address from Tanya X. Short, Captain of Kitfox Games and Co-Director of Pixelles. The topic Short spoke on was something near and dear to me: “There Will Never Be Too Many Games.” I wish there was more time to play all the games out there, but I definitely agree that there’s always room for more, especially with the Steam Summer sale looming. Short’s talk encompassed her experiences as an indie developer, the mythology behind her game, Moon Hunters, the inclusivity of the Montreal gaming community, and her advice for Kickstarter campaigns. 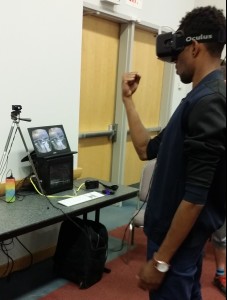 Brandon lets fly the fireballs in Fists of Fire

We headed into the vendor room next, where game developers and artists showed off their latest offerings. Brandon tried out Stephan Tanguay’s Fists of Fire, a leap motion game that uses Google’s Occulus Rift to let plays shoot fireballs and dodge enemies within a 3D environment. I visited the Unplugged Expo booth, but was disappointed to learn that the event takes place while I’ll be away on vacation. We checked out Unfinished: an artist’s lament, a 3D adventure where players help Doodle find his identity as the artist struggles to find meaning in their work and deals with  the frustration of creative block. Developer Andrew Hlynka invited us to provide unfinished sketches that would appear within the game upon release. The three of us deferred to Trisha, whose skills far outstrip our own. 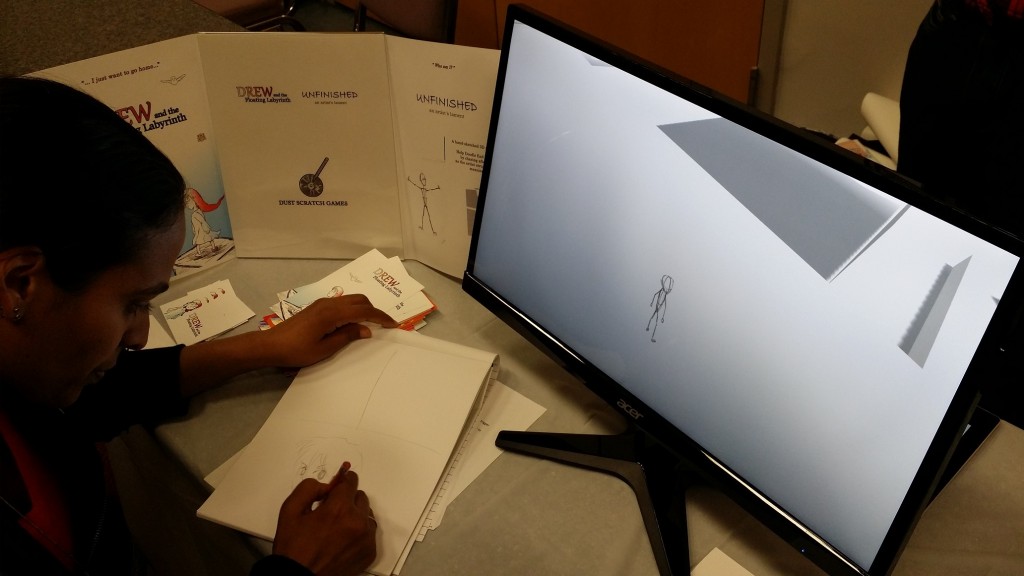 Trisha creates an unfinished sketch for Unfinished: an artist’s lament

Other events included cosplay contests, live action fanfiction roleplaying, and special playthroughs of classic games. We missed the speedrun of Super Mario 64, but watched one gamer complete MegaMan 2 in 35 minutes, utilizing his skills and taking advantage of a few in-game glitches. Another gamer defeated the Punch Out! boxers while blind folded. 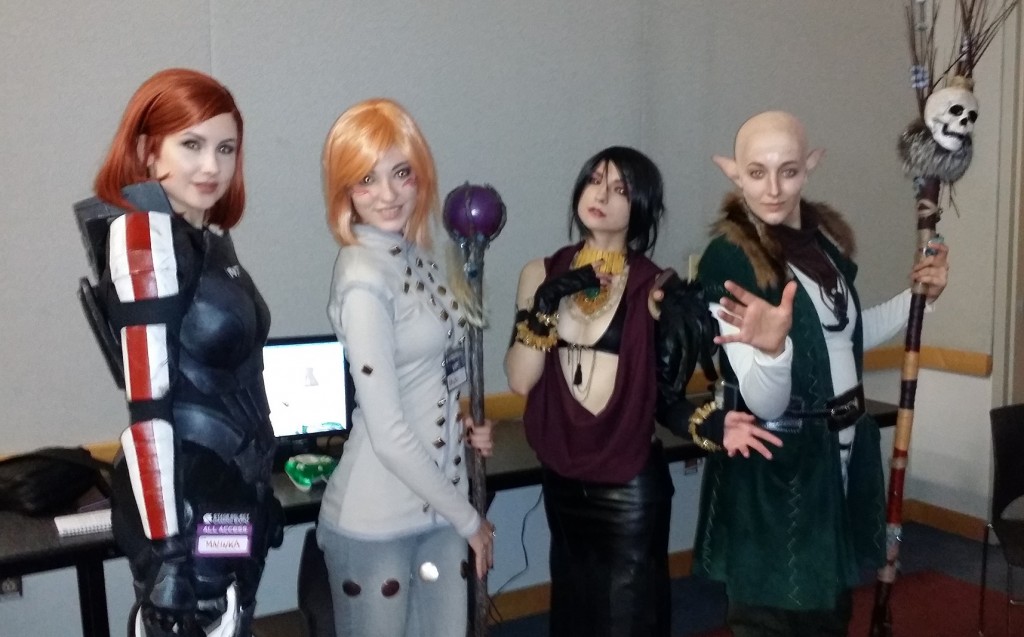 Our last stop was the arcade room, where heated battles were taking place in games like Duck Hunt and Dance Dance Revolution. Trisha and I were always fond of fighting games like Darkstalkers and Soul Calibur. We faced off in Marvel vs. Capcom while Nadia proved her newbie gamer mettle against Brandon in Street Fighter. Trisha and I granted Nadia permission to rub her victory in his face for the whole ride home.

Our first trip to Stage Select was definitely a success.