Last week, the internet let out a collective “Noooooooo!” as Hot Topic Inc announced it would be acquiring GeekNet, the parent company to ThinkGeek. Again, fans were rocked as word got out this week that GameStop would instead be acquiring the company with their $140 million offer edging out Hot Topic’s $122 million deal. Some of the internet breathed a sigh of relief, but one comment on Twitter caught my attention.

I would have much rather had Hot Topic own think geek than Gamestop. Hot Topic realizes that women and femmes exist.

As I continued through my feeds, I noticed most of the skepticism over GameStop was being raised by women. It got me wondering about how female-friendly factors varied between the two different companies and the potential impact to ThinkGeek.

Hot Topic Inc is already peddling geek culture with over 650 shopping mall-based stores. On the company’s LinkedIn page the first sentence reads “Hot Topic is a leading retailer of music and pop culture licensed apparel, accessories, and gifts for guys and girls.” 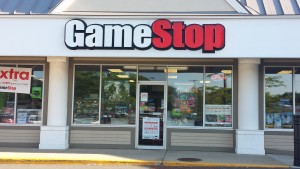 Let’s compare that to the About Us section’s first sentence on game retailer, GameStop’s website, “A global multichannel video game, consumer electronics and wireless services retailer with more than 6,600 stores worldwide, GameStop is a family of specialty retail brands that makes the most popular technologies affordable and simple.” Although it’s not necessary to call women out specifically in your mission statement, what’s interesting here is the placement on the page.

On the page are three photos of customer checkout interaction, a couple folks playing a game ,and then a mashup of games, but none of those photos contain women.

At the highest levels of leadership, GameStop breaks the roles of Executive Chairman of the Board of Directors and Chief Executive Officer (CEO) into positions held by two separate people, in their case two men. Hot Topic, possibly due to its size, keeps them as one position which is currently held by Lisa Harper, former CEO of Gymboree. For those wondering, GeekNet touted a female Chairman and CEO as well, Kathryn McCarthy.

It’s hard to forget GameStop’s employee training video from the 2009, explaining how to help female customers in anticipation of their “Sharpen the Mind, Sharpen the Body” campaign. Flash forward to 2015 and the store’s media image is still very young male based. This article from January, still speaks to stores as being a destination for “young, aimless men” and the crowds lining up for a midnight game release only referencing the men.

With a name like Hot Topic, it does tend to make finding news a bit harder. With the advent of the second Avengers movie in May, MTV.com did an article bemoaning the lack of superhero merchandise for women and stated that Hot Topic was one of the “best places to find nerd merch.” Others included in the article were the ever popular WeLoveFine and Her Universe.

As I was driving home from work, I realized with luck that I have both a GameStop and Hot Topic near me. With a quick detour, I took a stop in both. My local GameStop store is in a strip mall with a Panera and TJ Maxx clothing store. It has an open floor plan with most of the games lined up along the walls by console type. I noted that of the 15 large game signs and posters in the store, only 4 included female characters and none featured one as the main character. There was a small kiosk that contained geek culture merchandise such as statues and a few of the Funko Pop! toys as well. Two employees were on staff, one woman and one man, and the female employee came over to check if I needed help with anything. 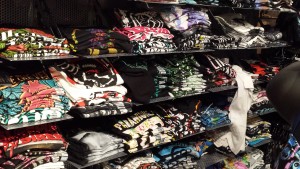 For Hot Topic, I had to drive to the mall. I’m not a regular mall goer so this was definitely a special trip. The store is chock full of geekery, clothes, toys, jewelry, tshirts and more that the store did feel cramped. With high displays, I did feel less open with less chance for being watched from afar, something that I’m personally sensitive about. Due to the nature of some women’s clothing it’s arguably easier for Hot Topic to visually promote a female presence. Speaking of clothing, this is where the company’s 18-24 year old market is really highlighted. On the wall of tshirts, I only found 23 XX-Large shirts available, and let’s be honest — those XX-Larges look more like big Mediums.

Ultimately, I’m not sure how ThinkGeek will fair with the new ownership. Perhaps GameStop is looking at ThinkGeek as an opportunity to expand their market and to make stores more welcoming to women. In a lot of ways it does make sense for GameStop to add a completely new offering to their customers rather than Hot Topic expanding its current reach. I In the end, it may not matter who would have won out. Only time will tell the overall affect on all ThinkGeek’s customers, including the women.