Say What? Minecraft as a Teaching Tool for Homeschoolers

At some point about a year ago, a friend’s son introduced our eight-year-old to Minecraft on iPad. The game appeared harmless enough, and to be truthful, I had a parenting fail moment because I didn’t even research the game settings and environment before allowing her to dive in. In a very short time, my daughter has become a true fanatic. She owns t-shirts, action figures, stuffed characters, game manuals, fanfiction softcover books and ebooks, and the game itself on three different platforms. Do I seem like an indulgent mother? Maybe. But when her birthday or the holidays come around, she only asks for one thing—more Minecraft. It doesn’t even bother her that she can’t play a female character. (We don’t do mods, so she can only be Steve.)

We have our limits. She’s only allowed so much screen time a day, no community play whatsoever, and any videos must be watched on the Mineflix app. If you ask my daughter why she enjoys this game so much, she’ll tell you it’s because she can build and destroy as she pleases. Hours are spent making houses, brick dinosaurs, and roller coasters. She can breed animals or kill them all off with a touch of her finger. If she isn’t in the mood to survive zombies and creepers, she keeps it in creative mode.

I live under the assumption that Minecraft has become enough of a mainstream game that many adults and definitely the majority of children have heard of it or played it in some form. Most parents I’ve spoken with adopt the same attitude I have…as long as there is the ability to preset parental controls to prevent access to outside gaming communities, they don’t mind letting their kids play. A review of the game from Common Sense Media explains my reluctance to allow access to community servers with the following warning:

“Parents should note that this game has a thriving online community hosted by private, non-moderated servers. This means players could encounter offensive content in the form of profane text messages and suggestively shaped player-created structures, although players don’t have to engage in online activity to enjoy the game.”

I certainly take the game for what it is—a game. A time-suck game. A my-kid-will-not-bother-me-for-the-next-two-hours game. I’ve seen the different articles on Minecraft‘s educational potential, but I’ve never bought into the hype. If you do, that’s great. The Minecraft for Dummies author, Jacob Cordeiro, who was only sixteen at the time he wrote the book, gave an interview at Tech Savvy Parents in 2013, where he outlined the different educational benefits:

“TSP: For parents who are hesitant to purchase Minecraft, can you describe the educational benefits?”

“JC: While it doesn’t directly say so, Minecraft is a very educational game both in single player and multiplayer mode; in addition to providing an outlet for creative world-building, it teaches resource management, fundamental economics, theoretical survival skills and even programming. I’ve used it as a building tool for solving math problems, and have employed the ‘redstone’ power system to practice circuitry and logic. Looking back, Minecraft has been a major catalyst for most of my creativity, and I’ve thoroughly enjoyed it.”

I have a resting skeptical mommy face, and that’s what I wore as I tried to remember Cordeiro is also trying to market his book. The best way to get a parent to buy something is to tell them it’s also educational. Yet, even after hundreds of hours of play if I handed my daughter the pieces to make a simple circuit, she’d fail miserably. If she had to fight a zombie, I have my doubts she’d be able to tap them to death with her pointer finger.

The friend who introduced my daughter to the game also homeschools her son and brought to my attention that some local homeschooling groups are using the game as a teaching tool. Mind you, the statutes in Florida are very relaxed when it comes to homeschooled children. There are no required teacher qualifications for parents. The state requirements boil down to as long as the child learns something about anything in a year, and the parent provides documentation, they can continue to homeschool. Of course, that’s an oversimplified explanation of the statute, and each state is allowed to set their own standards.

Like a spreading rash, I couldn’t help but scratch at this tidbit of information. Why Minecraft? And I didn’t want the answer about teaching survival skills. That didn’t work for me. Why not use some form of accredited educational game? Are there such games?

Although my friend wasn’t engaged in the program, I sent her back to the local homeschool group to get more information. It turned out the parents were talking about a series of online courses. I still couldn’t let it go. What was I missing? Why would this game be any better than Disney’s new Imagicademy app? I took off my resting skeptical mommy face and dove into some research. What I found was several sites combining community game play with lessons on history and literature. Safe server environments are set up for enrolled students to meet together for discussion groups and building challenges. While the different sites vary in pricing and lesson styles, they all boast one main advantage, and that is the opportunity for students to engage in learning while playing a game they already enjoy and in most cases excel at. 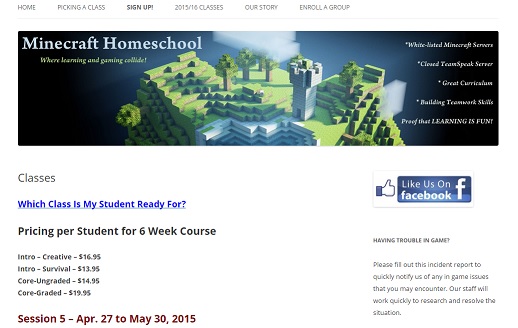 Minecrafthomeschool.com: Jody Nova, owner of Minecraft Homeschool, credits her son with the creation of this homeschooling program. The parent and student are allowed to decide to work in creative or survival mode, and the community server is private. Classes usually run approximately six weeks and can cost between $16.95 to $19.95. Some of the upcoming class titles are “7 Wonders of the Ancient World,” “Master Chef,” and “The Underground Railroad.” What I like about this site is the chart assisting parents with determining if their child should start at the intro or core level depending on reading ability, typing skills, time commitment, and Minecraft experience. 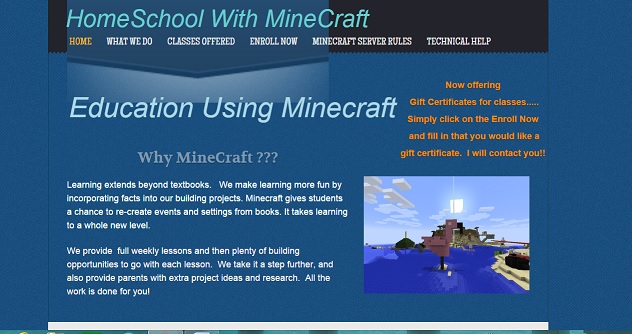 HomeschoolwithMinecraft.com: Unlike Minecraft Homeschool, the webmaster of HomeSchool with Minecraft and builder of lesson plans is a little difficult to determine from clicking through the web pages. Homeschool with Minecraft courses run about four to twelve weeks and can cost between $6.99 to $15.00 and also use a private secure server for students to meet. Parents can choose for quizzes to be graded and certificates of completion provided depending on state requirements. A few of the self-paced classes offered are “Building with Dr. Who,” “Where in the World is Carmen Sandiego,” and “Famous American Women.” What I like about this site is the offer of the free Monthly Builders Club.

SKrafty Homeschool Minecraft: Skraft Homeschool Minecraft has two parts: a full featured gaming server and an online educational site which integrates the lessons with Minecraft. This site appears to be Christian faith based. The servers and chats are moderated by parents. The classes can run from six to sixteen weeks and cost between $6.99 and $15.99. Parents can sign their kids up for individual classes or use a subscription for all classes. Some of the class titles are “Exploring Fractions,” “All About Plants,” and “Inventions and Technology.” What I like most about this site is an optional Chores Rewards System. For an additional $2.99 a month, your child can submit chore forms and receive codes to use in the chore cave.

A big drawback and total stop to my further investigation of these lessons was the need for Minecraft on the PC. This is the only device in my house where I refuse to share time with my kids; however, I was able to view a lesson sample on one of the sites, and it didn’t appear to be anything I couldn’t pull from online resources and piece together. For example, I could print out a section about Viking history, read it with my daughter, and then challenge her to build a Viking ship replica. For busy parents who’d like to skip the step of researching and preparing their own lessons, I can see the appeal of having everything in one place already done for them.

The Minecraft for homeschooling sites have me convinced that they’ve created an engaging atmosphere for kids to expand their self-paced learning of history and literature. They’ve even given me a few ideas for how to keep my daughter in learning mode during the summer. I won’t ever agree that Minecraft truly teaches survival skills, and I don’t think this is something that will be presented at the state or county level and used in conjunction with core curriculum for school children any time soon. But, I do believe that we live in a world of never say never.

Read the rest of the Mom’N’Pop Culture series.