Welcome to the next installment of the Game Section’s monthly roundtable! Growing up is weird. Gaming can be strange. The games children play? Often truly bizarre. This month we talked about games we played as children. Apparently we all know our way around a solo board game or two. What did you all play, readers? Join in the discussion in the comments.

Did you grow up with siblings or as an only child?

Jo: I was an only child, with two working parents. I got two (younger) step-siblings and a half-sibling when I was a teenager though, so I wasn’t entirely out of the big sister game.

Jules: Yup. I grew up with my older brother and sister, who are eleven and ten years older than me, respectively. I also have three other step-siblings, but I met them in my teens.

Claire: Only child until I was five (which was plenty of time to get used to being the only one)… I have one sister to whom I was generally nice? Could have been nicer. Should have been, actually, as she’s more tech-spendy than me, so I inherit her cast off consoles, iThings, et

Wendy: I was kind of an only child, because I came along a decade after my three siblings. One of my brothers took it upon himself to raise me initially, and a lot of my geeky influence comes from him.

Al Rosenberg: Although I have five brothers now, I spent most of my childhood as an only child.

What was your favorite game to play with others as a kid?

Jo: Will it sound horrifically lonely if I said I didn’t have many games to play with others? I climbed a lot of trees, but the only multiplayer game I can really recall playing was chess, with my father.

Jules: Hide and seek was always a favourite. Here we have a variation called Forty-Four Home, where the seeker stands by a tree or “home” and counts to forty-four before looking for the others. Meanwhile they not only have to hide, but also make it back to “home” before the seeker catches them.

Claire: Dressing up, and/or “adventure.” My village had woods and back alleys and a lot of climbable trees, and nobody’s parents seemed to mind where we went. There was also a lot of racing around our cul-de-sac, roller skates, roller blades, bikes. Gotta go fast~ When I got a bit older, Monopoly?

Wendy: I played Pony Wars with my twin friends up the road and constructed houses out of cardboard boxes for my My Little Ponies.

Al: I spent a lot of time alone, playing video games. My parents were really young when I came about, so they had an SNES that I started playing as soon as I could hold the controller in my hands. Every once in a while I played “Marriage” with the neighbor girl. It was boring, but she had great plastic food options.

What was your favorite game to play by yourself as a child?

Jo: Oregon Trail, hands down. Even if I didn’t quite get the game, I loved spawning a super-rich doctor and just… making it through. I think that game may have planted the life-long rogue-like addiction in me: to this day, I still love playing games that may not, necessarily, end, like FTL.

Jules: It’s a tie between Pokemon Red or Super Mario Land. See the thing is, up until I was a teenager, I was scared of most games and never really finished any. Even something like Diddy Kong Racing I found too stressful, so Pokemon and Super Mario Land were good alternatives. Simple, laid-back, they required skill, but didn’t demand anything too strenuous for a kid like me.

Claire: The same as what I played with other people, to be honest. Video game-wise, I LOVE MINESWEEPER. My Gran and Grandad packed in farming to sell computers when I was pretty small, and Gran has a lot of games on one of her show-PCs which I would be allowed to play if I were good. I have a forever-love of Jewel Thief, which I have never been able to find since, and Kai (ditto). Jewel Thief is controlled by mouse movement; you have to float your little guy around various landscapes, picking up jewels and avoiding enemy thieves. Kai is a planning and puzzle game where you guide a little green dot, named after the developers’ dog, to what I supposed were also jewels, actually, with keyboard directions-strokes.

She also had some educational-ish interactive fun packs, The Magic School Bus one, one themed around dragons, a couple of Winnie the Witch sets. Oh! And breakout. I LOVE breakout.

Wendy: I played a mean game of lonely Monopoly… Super Mario Bros. when it came to video games, and then Final Fantasy VII came along.

Al: A Link to the Past. I was obsessed. And then all of the Backyard games, ESPECIALLY Backyard Baseball.

Did you prefer to play with others or by yourself?

Jo: I think I preferred to play with others, but I never really got the chance!

Jules: With others, as a kid the party games were where it was at. Pokemon, Super Smash Bros., Diddy Kong Racing, Mario Kart 64, and even things like Monopoly or taking turns with more single-player affairs was great with a group.

Claire: I played POGs with other people, and skipping games, and I like to watch people play video games, but I don’t really like video game co-op. I never saw the point of trading Pokemon, or fighting other humans in Pokemon battles. (Much more recently I played Dynasty Warriors as the second controller and it was infuriating; when the other person completes their mission you’re just whipped out of whatever you were trying to do. It just feels rude!) When I was younger I wouldn’t have enjoyed teaming up to play computer games because I would have been irritated by constrictions of co-op play, but I wouldn’t have been able to verbalise my dismay, and would have felt more and more unhappy in company. I guess my style is very easily cramped.

I remember one time I played Monopoly with my friend, and it turned out I was concentrating so hard on cheating my way that she managed to cheat her way for a long stretch. After she mentioned that the joy of the game palled rather fast.

Wendy: I was comfortable playing by myself, but always enjoyed company when it was available, especially when they were into geeky things like me, which is why I got along so well with the twins and still remains friends with them.

Al: By myself. I am NOT good at multiplayer games. I’m… working on it.

What was a game you played that was really complicated?

Jo: Sim City 2000. I got it as a wee small kid during a Scholastic Book Fair. My ma was a computer programmer, so we always had a computer in the house, and I was absolutely to the moon when the Scholastic Book Fairs started offering CD-ROM games. I never, ever understood what was supposed to happen in Sim City 2000—building infrastructure? An alien happened?—but I kept revving it up and clicking around, just to see if maybe it would click. 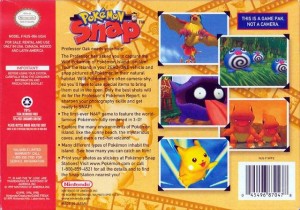 Jules: Pokemon Snap. You may laugh, but look up just what it takes to snap a photo of every single available Pokemon in each zone throughout that entire game. It’s ludicrous! You would have to know specific times, places, and figure out all of these puzzles all while on rails without any chance of stopping. And this was before I had Internet access, so it was all schoolyard rumour and hearsay. To this day I’m still not sure if I photographed every single one.

Wendy: I like Claire’s answer. I’m not big on challenge and complication. I won’t turn away from it automatically, but I am not interested in games that frustrate me. That’s just not fun. Also, I’m lazy.

Al: Myst. It was/is so infuriating. I threw a few temper tantrums, I’m sure.

If you played with others, do you think it made you a better “team player” as you got older?

Jo: Honestly, I think playing alone made me a better team player, because once I started playing multiplayer games, I was too eager to please to really go after anyone! I’m still very non-competitive, and in games like Magic: the Gathering, I tend to try to keep the board even, so that everyone can keep playing with me and having fun.

Jules: I’d say so. I’ll admit, I was fairly fat as a kid. So I wasn’t the fastest, or strongest, and definitely not the smartest. What I was, though, was reliable and eager to please, so I always acted as back-up for whatever team I played for in games, be it of the video or playground variety. Nowadays that’s the same, I like playing support roles, and I tend to be very flexible when picking how I’ll play in a game with others.

Wendy: When I was younger, I was always the follower. Somewhere in high school, I gained confidence and became a leader, but only if I determined that there was no one else worthy of the role. I’m not sure any of that came from playing with others.

Al: Playing “Marriage” really prepared me for…well, definitely not any relationship I’ve been in. I’m the kind of person who either wants complete control over a situation, or no control. Which is great in co-op games, but not in “teams.” (Future employers: I mean, I’m the BEST TEAM PLAYER.)

Do you miss playing any of the games from your childhood? Do you still play them now in some form?

Jo: Tragic story: when I was growing up, I loved mystery books where you flipped them upside down to see whodunit. I’m still in love with Encyclopedia Brown, and that was the gateway drug to the Clue novels. I watched Clue the movie over and over. When I was six, for Christmas, I demanded to get the Clue board game, which in retrospect, was not very good. But lonely, cloistered me—I only had my parents to play with, and they didn’t really like board games. So I never actually got to play my copy of Clue with any humans.

Beyond that, no, not really. Games have gotten more refined, and honestly better as time has passed. No nostalgia for me: give me any game made after Settlers of Catan over Monopoly.

Jules: Strangely enough I’ve always been fond of Monopoly. It’s a mixture of chance and resource management, and the whole property aspect and wheeling-and-dealing with others was so much fun. I even played the PC version, enamoured by the little CG vignettes that played with each dice roll. I now play it every now and then, usually with my girlfriend’s family who are more into board and card games. However, that has definitely translated into my other gaming habits, especially with something like Civilisation V and XCOM: Enemy Unknown. Turn-based management of resources mixed with strategy and a spoonful of chance has always appealed to me.

Claire: Yes! Yes! I really do! If anybody can throw me a link to Kai or Jewel Thief… Such happiness. Could any of us deserve bounties that great?

Wendy: Jo, I will meet you in the kitchen with a lead pipe.  I love Clue and the Clue movie, and I was always so disappointed that I couldn’t get people to play with me. We need to hook up.

Al: I miss some of the video games. But I mostly miss my capacity for imagination. Playing “House” or Barbies just stopped being possible at some point for me.