PAX East 2015 in Indie Games: Games are for Everyone

PAX East 2015 is a convention that’s out to prove it: games are for everyone. And you know what? It works.

As soon as you enter the Boston Convention Center, there’s the booth for Extra Life, a network of gamer donors benefitting the Children’s Miracle Hospital Network. The door to the Expo Hall is flanked by the PAX merch booth and the beautiful lavender booth of AbleGamers, a charity working to make video games accessible to gamers with disabilities. Up the stairs and to the right, stressed and anxious attendees can find the AFK Room, a calm little oasis provided by Take This, a mental health organization inspired by the famous line from The Legend of Zelda: “It’s dangerous to go alone. Here, take this.”

Despite the wall of people, despite the tumult of screens and game noises clamoring for your attention, PAX East wants its attendees to feel cared for. This sentiment shows in all the minutiae of the show, from the constant presence of friendly PAX enforcers to the ample hand sanitizer stations around the convention center. 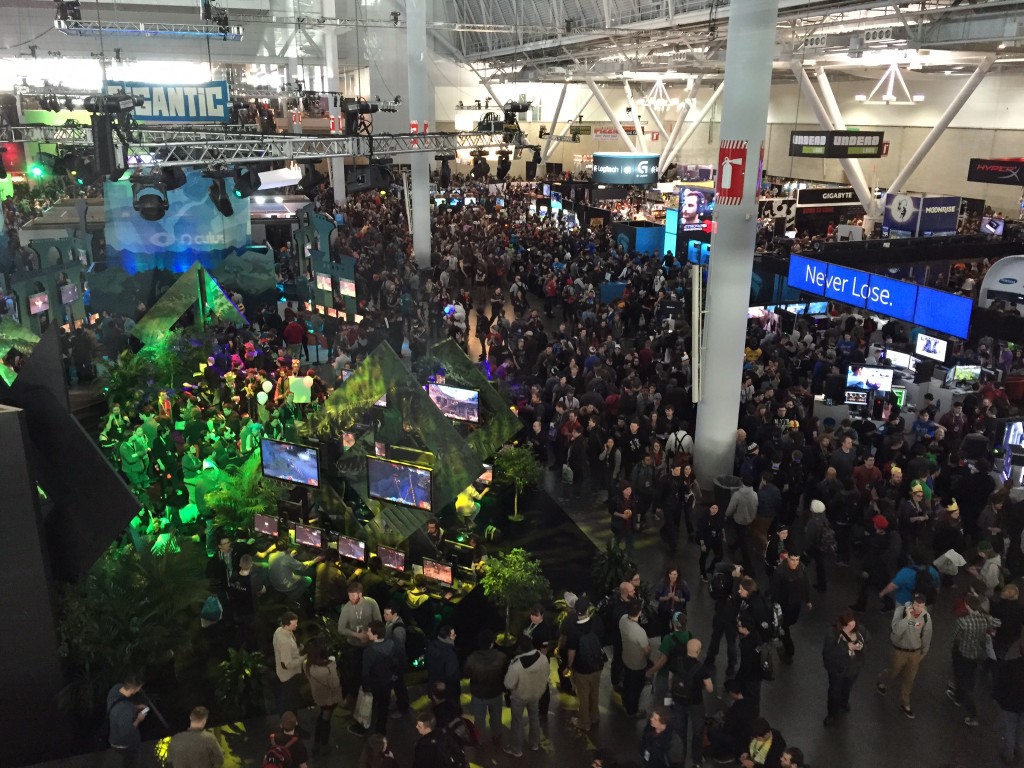 The Expo Hall at PAX East 2015: a mosh pit of games anticipation.

All these efforts were palpable for me, your humble indie games reporter: the Indie Megabooth is a sprawl of smaller stations in the crowded center of the Expo Hall. At least I could dodge past the long lines and crowded booths of the AAA companies (though not without regret, she thinks, walking past the demo for Halo 5…) But to me, independent games are the heart of PAX East and the video games industry as a whole.

“Hey Jo, if games are for everyone, then what’s coming down the line for me?” Here were my five favorites from the showroom floor: 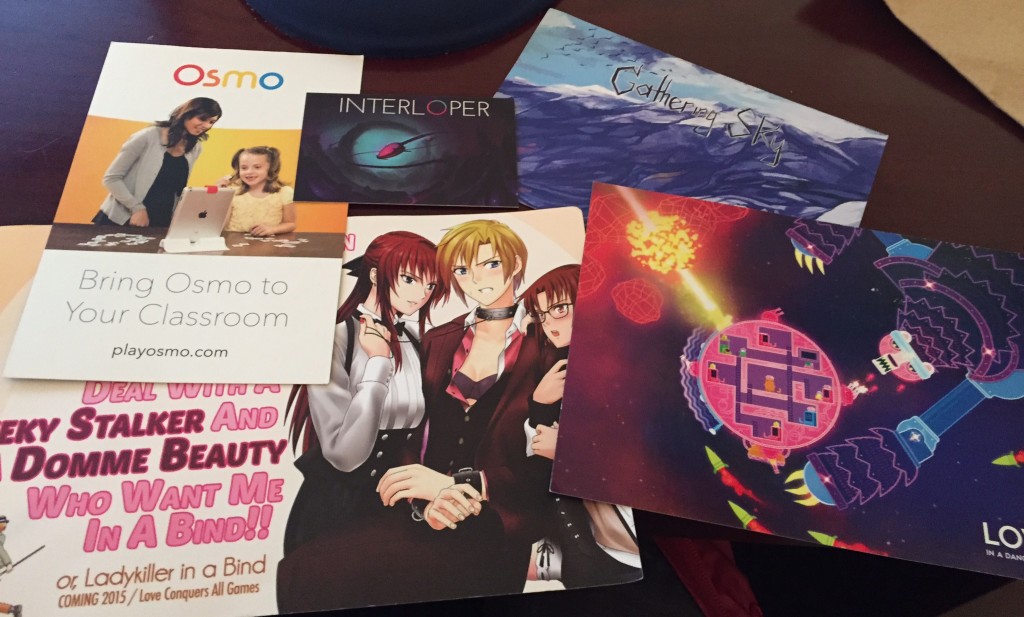 For the Anxious Gamer Who Needs to Chill Out: Gathering Sky

Gathering Sky is a simple game about being a bird. Guide your bird over a beautiful hand-drawn landscape, collect a flock, and ride gusts of wind while the San Francisco Symphony Orchestra plays the game’s soothing background music. You drift and glide around the map until the next level appears, with no stated goal and very little instruction.

I asked developer Matt Blair if he was concerned that players would feel purposeless or confused without instructions. That, as it turns out, is part of the point of Gathering Sky: to engage with a world that you’re not trying to conquer and to lose yourself in a safe space. The wordless calm of the game makes it great for non-English speakers, and the graceful spins and turns of your flock of birds makes for a relaxing time, even on the show floor. Look for it on iOS, Android, and Steam, late April 2015.

For the (Dys)Functional Couple: Lovers in a Dangerous Spacetime

Local co-op and neon colors are making a simultaneous comeback, and I could not be happier. Lovers in a Dangerous Spacetime captures the spirit of both. Players 1 and 2 (or play solo with a helpful dog friend) pilot a circular spacecraft around, running frantically from station to station to control the four guns or realign the shields to stop obstacles and attackers from all sides. The boss battles are based on constellations (my boyfriend and I fought Ursa Major!), and the game does a great job of making you feel fun-stressed and triumphant. If me and the other demo-players are any proof, ready yourself for some good-natured bickering and frantic shouting with your bestie.

Lovers in a Dangerous Spacetime doesn’t have a release date, but we’ll watch out for it on Steam and XBoxOne.

For the Kinky Femme with Imagination: Ladykiller in a Bind

Christine Love of Analogue: a Hate Story and Hate Plus fame returns full-force to games with a visual novel about kink and confusion. You see, your twin brother makes you crossdress and pretend to be him, and you have to survive seven days aboard a cruise ship with his classmates and enemies. Social manipulation is the name of the game, and although I didn’t see as much decision-making in the PAX East demo, Christine’s storytelling skills will keep Ladykiller on my radar. It’s due for release late this year, so we can wait for it together.

Note: trailer is safe for work, but you may want to save it for home anyhow.

For the Starcraft Fan with Stuff to Do: Interloper

“YES, TELL ME ABOUT IT,” I yelled back, unable to contain myself.

You begin as a horseshoe-crab-like alien on one side of a symmetrical map that’s no bigger than your screen. You glide to bases to spawn little fighters or to nodes that will power your spawn bases and give them extra abilities. The path you take through the map is also strategic; enemies can be cut off and trapped, and you can wander free to claim their resources. Interloper has a relaxing color scheme and is entirely without the frantic, finger-aching clickiness of other strategy games.

And it takes only five minutes a round. Interloper is due out sometime during quarter two on PC, Mac, and Linux.

For the Busy Parent and Antsy Kid: Osmo

Osmo is an accessory for any size iPad which reads the space in front of your iPad and creates a child-friendly mini-game based on whatever’s there. The accessory launched with three games, but the company is planning more (including one that teaches kids to code — I’m excited for it). The first displays a slideshow of objects on the iPad screen, and kids can use the plastic letter tiles to spell what they think is being depicted. The second is the classic game Tangrams, and you can arrange the plastic pieces in front of the iPad to match the displayed shape. The third, which obviously fascinated the attendees of PAX East, is a physics-based game. Red dots drop from the top of the iPad, and you can draw lines (on a whiteboard, or chalk board, or whatever) to bounce the dots onto on-screen targets. The interface is simple, and the product is aimed at children 6+, but kids of all ages can really benefit from it.

The coolest part for me was customization. Parents can upload their own photos for the letter-guessing game, which to me changes an educational tool into a goofy party game. Buy Osmo online or in Apple stores.

For All of Us

We talk a lot on Women Write About Comics about representation: making sure that persons of color, women, transgendered people, and folks of all body types are represented as human and not as symbols or parodies. In storytelling, this is doable — though some choose to do it poorly or not at all. For video games, a physical disability can often change a gamer’s ability to play at all, to engage with a game without difficulty; too many buttons that require too much muscle control or both hands or no auto-run functionality which means a player has to maintain pressure on certain keys. Sight and sound cues are so important in games that we often forget about our friends who can’t process these cues as quickly or as fast.

I’m pleased that PAX East has acknowledged all gamers, and made space for non-white, non-male voices. But especially wonderful is the prominent placement (in the front hall, in the diversity lounge, and speaking in panels dedicated to the subject matter) of AbleGamers, a charity dedicated to making games accessible to all. They fund specialized controllers for folks who can’t use the “default button configuration.” They help streamers who want to add a charitable angle to their gameplay. And most importantly, at conventions like this, they appeal to game designers to consider all kinds of people and all kinds of input mechanisms.

PAX East is, according to its promotional materials, the largest gaming festival in North America. I don’t know if it’s an accurate cross-section of gaming culture. I don’t know how diverse its attendees are; tens of thousands of them. And I can’t peer inside the heads of its creators. What I do know is this: over three days, the convention inspired me to consume and create games more thoughtfully. It made me happy that a large segment of gamers and gaming culture were willing to come together to create a safe space for each other. I know that PAX staff work hard to foster that feeling, and that everyone involved wants video gaming to be a community, and not just a hobby.

Games are for everyone, and for a weekend, I believed it.