Borderlands: The Pre-Sequel! is the latest entry in Gearbox’s quest-oriented first-person shooter. The first entry boasted over 17 million different guns, which you could collect on a mostly random basis by opening chests. As the third of its kind (setting aside narrative-focused sister game Tales from the Borderlands), The Pre-Sequel’s pre-launch marketing was focused on the popularity of the previous games.

The game released with four playable characters, all of whom referenced previous iterations of the franchise:

This was always meant to be a game about legacy. Long before launch, Gearbox released a couple details: the game would be set on the moon, and its story would focus on the rise of the Borderlands 2 villain, Handsome Jack (thus, Pre-Sequel). Within the first five minutes, you find that The Pre-Sequel is a frame narrative: characters from the first installment are interviewing one of the playable characters, in a timeline after the second installment, and… and…

And that’s my point. According to Esquire, 2015 will give us 30 movie sequels. The video game scene will be inundated too, with continuations of newer titles (Dead Island 2, The Witcher 3) and old, familiar faces (Metal Gear Solid 5, Persona 5, and even a new Starfox game.)

Can a newbie (to first-person shooters in general and to Borderlands as a series) find a toehold in an established franchise?

Tracy is: Wilhelm, cyborg henchman and a significant boss battle in Borderlands 2. He summons three drones, for attack, defense, and support.

For The Pre-Sequel, Gearbox joined Take Two Australia and set the game on Elpis, the moon above Pandora. The Oz talent—writers, voice actors, designers, and developers—give this game a different flavor, while staying dedicated to the cool skill trees and frantic firefights of the previous Borderlands games. In addition, The Pre-Sequel added a new gameplay element: the cutely-named Oz kits. Oz kits protect your face and allow you to breathe in the no-atmosphere environment of Elpis. You can also vent your oxygen faster to heal teammates and jump amazingly high, which makes for some spectacular gunfights on all three axes. Got some air? You can drop to the ground quickly and damage enemies around you (and with certain kits, deal elemental damage), in what the game lovingly calls a Butt Slam. 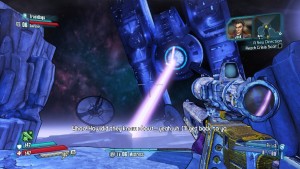 Helios Station, seen from the moon. Every screenshot is this beautiful.

The game opens in an emergency aboard the space station Helios, controlled by a manufacturing company called Hyperion. Cowardly robot engineers avoid the invading soldiers—mercenary from a competing company, Dahl. Borderlands fans recognize these names: two brands that festoon the various guns that are found in loot chests scattered across the world map. In our efforts to rescue Jack (a lone Hyperion engineer who has promised us enormous amounts of money to save him), we meet the invading Colonel Zarpedon and a mysterious, inhuman baddie.

Zarpedon takes the space station, and disables its weapons with a blocking signal, originating on Elpis. Jack remains on the station and launches you to the moon, only to be rescued by adorable local, Janey Springs. Janey is your guide throughout the first part of the game, equipping you with your first Oz kit, and bringing you to the hub city Concordia. Each Borderlands game has such a hub, where you can reassign skill points, exchange weapons and items between your characters, and basically do all of the administrative paperwork that games with RPG elements demand.

At the end of the first chunk of play, we had disabled the signal blocker and rescued Jack from Helios. He confronts The Merriff (mayor + sheriff), a former crony who’d been working behind the scenes to stymie Jack’s efforts. Jack gets his first taste of hard murder, and he really, really likes it.

As we worked through the first part of the game, Tracy was glad to spend more time engaging with the non-player characters and explore the world, whereas I spent a lot of my time wandering off and cashing in weapons for space money at vending machines—a staple of the Borderlands franchise. She met Jack (not yet Handsome), knowing that he would eventually transform into a villain.

I really wanted to know Tracy’s feelings on the first part of the game. 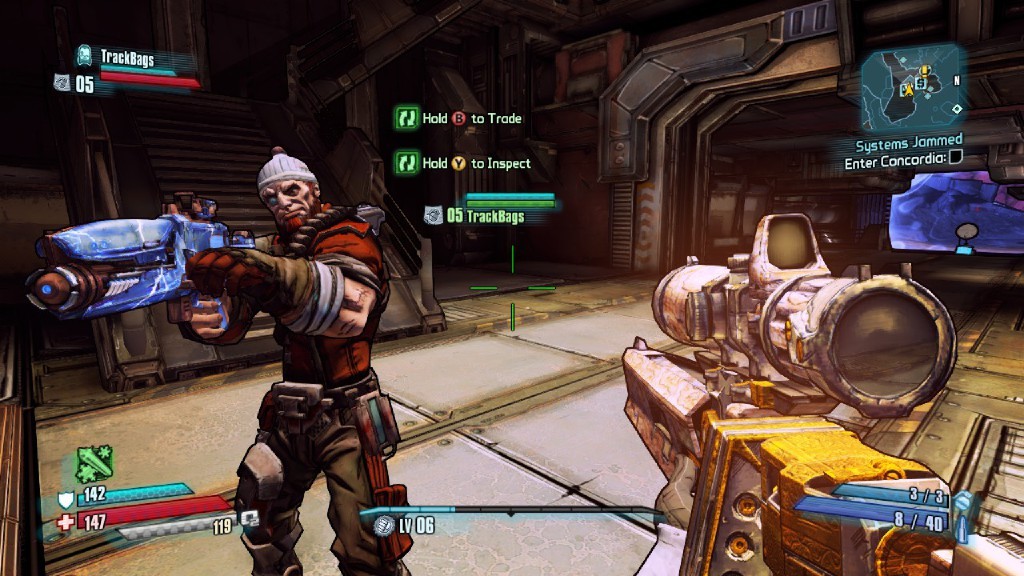 Jo: So this game is really mired in the history of the Borderlands. How have you handled some of the plot elements and in-jokes, having never played any of the other games?

Tracy: For me, it was enough to at least be familiar with the tone of the previous games. They’re brash, deranged, screamingly funny. I knew Pandora was a ruined, lawless planet. I knew a vault hunter was an explorer/looter type. I knew there were lots of guns. I’ve been enjoying the game as an off-color, ridiculous sci-fi adventure story. I’m not too broken up over missing the many references and callbacks. If anything, they’ve piqued my curiosity. I definitely plan on going back and playing the previous two games.

Jo: I’ve been trying to explain some of the backstory of the previous games, and Jack’s destiny was spoiled (almost unavoidably) before you started playing. How do you feel knowing that Jack (and the character you picked, Wilhelm) are destined to go bad? Are you still engaged in the story?

Tracy: Jack is the exception to my enjoyment of the story—I do feel like I’m missing something not knowing much about him. It’s great to see an origin story of sorts, about this megalomanical asshole with a laser bracelet shooting people in the face just because  But Jack in this game could be any super villain. He could be Lex Luthor, he could be Hans Gruber. The game assumes I know Handsome Jack from Borderlands 2, that I’m marveling in seeing him Before He Was a Nutjob.

Jo: I know you haven’t played that many first-person shooters. What has been the hardest thing to acclimate yourself to? And what’s been the most satisfying? Do you feel yourself getting better?

Tracy: I’ve had a dickens of a time with spatial orientation. Whenever a background is monochromatic, like most of Elpis, or just looks very similar, like a long hallway or spaceship, I have a tendency to get lost. Or, comically, get completely turned around in the opposite direction and fall into a pool of lava. It’s frustrating, and isn’t limited to just Borderlands. It’s turned me off of shooters as a genre. The anti-gravity hasn’t helped. I often found I would fall off of a building, spend too long first figuring out where the hell I was, then struggle getting back. It felt like I’d died in an instance in a MMORPG. It absolutely killed any sense of immersion. 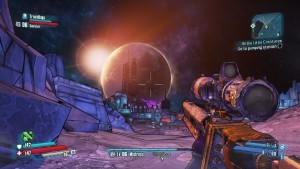 Even a pumping station is beautiful, but can be hard to navigate.

Most satisfying has been the weapons. They’ve scratched a particular power fantasy itch I didn’t know I had. I picked up a purple laser cannon and went to town. I cannot do this in real life.

I feel like I’ve gotten more comfortable in Wilhem’s role, if not improved at the game itself. I can run right into the action, deploy Wolf and Saint (drones), maybe rattle off a battle yell or two. And the game does not punish you for that. Especially if you follow the Dreadnought skill tree, making Wilhem one tough cookie.

Jo: Let’s travel back in time to your first play session with Borderlands: The Pre-Sequel. Would you recommend this game to another new player, as you were first starting out?

Tracy: The very beginning is super forgiving. It was a relief that I could rush in with a 3rd person RPG playstyle, which is what I’m most comfortable with. There is something of a double learning curve, however, when you add in the anti-grav element. Once you arrive on Elpis, the game asks you to both re-learn how to move as well as how to fire your weapons. And then they give you a buggy (triple learning curve?). I’d say, be prepared to face that curve. It’s not easy to explore on first blush. Heck, you can’t even breathe for the first twenty minutes or so.

Overall, I wouldn’t recommend this to a new player.  While it’s a lot of fun, the things that make it unique are tied to the previous two games. Even without having played them, I still get a sense of “if you liked Borderlands 2, here’s more of the same!” I suppose you could call that sequelitis, but I get a sense that this game wasn’t exactly made for me, as both a non-shooter gamer and someone unfamiliar with the story.