For All the Pixels I’ve Loved Before

Some of the video games I play allow me to create and develop characters as I face each challenge the story present. Based on the game lore and smatterings of personal information, I like to create backgrounds for my characters and play the game according to the personality I mould for them. These are role-playing games, after all, and I get to live vicariously through my agent or mage or elf or commander as they storm the castles, battle evil, and dismantle the nefarious plots. And I get to interact with the various companion characters that invariably join me on my adventures.

One of the most important things I have learned — specifically from playing BioWare video games — is that you should always flirt with your companions whenever the interactive dialogue presents the opportunity. That is to say, BioWare does such a great job of writing fully fleshed out companion characters, that if you take the time to chat with them, you might find that they make for great friends or even lovers. These are just  characters made out of pixels and programming, but they have feelings, dammit. And so do the players. It’s not hard for some players to find good reasons for their main characters to fall in pixelated love.

Special thanks to my beloved friend Tiara for creating “The Heart Wants What It Wants.” Good friends share music with you. Awesome friends make entire playlists to go along with your crazy geek obsessions.

For Cipher Nine, trust is dangerous. Love is deadly. Aristocra Saganu knows he plays a dangerous game in loving an Imperial Agent, but they both believe in the Empire and know that they serve a greater purpose. Their clandestine love affair compromises enough as it is, but the mission always comes first. Cipher Nine has already sacrificed her entire identity to serve the Empire. If she must choose between the mission and her beloved, her blade will strike with no hesitation. Almost no hesitation.

Date Night Destination:  A Hutt Cartel Palace on Hutta, where no one asks questions. Unless they have a death wish.

Setting the Mood: Spank, Kidneythieves; She Rides, Danzig; If I Was Vampire, Marilyn Manson

The young noble woman, Allaré Cousland, just wanted to spend her nights sleeping with all the hot guys, and her days slashing things with her mighty great sword. But her life of frivolities was stolen from her the day Arl Howe attacked her estate and killed her parents. Her only choice was to somehow seek vengeance by joining the Grey Wardens. Meeting fellow Warden Alistair offered the answer. As the bastard son of the previous king and heir to the empty throne, Allaré could have her revenge and so much more. But with his hapless charm and virtue, and his unerring bravery in battle, Alistair seduced his future queen long before she could succumb to the darkness of revenge. He had her at “Maker’s breath…” 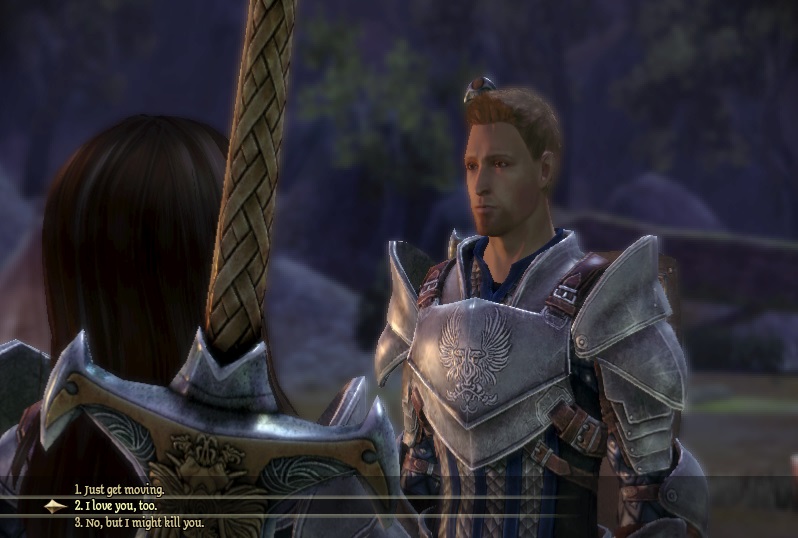 Date Night Destination: Allaré would want to shock Alistair with a trip to the Pearl on the seedy side of town, but Alistair would surprise her with a romantic picnic atop Fort Drakon. 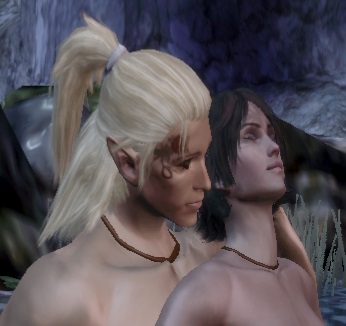 Mardelle Mahariel hated humans, but was forced to leave her Dalish clan with one when she became infected with the Darkspawn sickness. She hated city elves, too, and treated them as the lesser creatures they were for allowing themselves to be enslaved by humans. Fortunately, Duncan of the Grey Wardens, and that infectiously charming Alistair, taught her that not all humans were worth an arrow through the heart, and that plucky, smarmy elf assassin Zevran taught her that there was more to elf life than living in the forests being snobs against their own kind. In fact, Zevran taught Mardelle a lot about lightening up and having fun, even in the middle of a Blight. It’s a good thing Zevran failed to assassinate her, and that Mardelle had opted not to kill him.

Date Night Destination: Gallivanting across the waves with Isabela on her pirate ship.

Daithni is a Sith Lord. She does not have companions. She has minions and they are meant to serve her whims as she claws her way to the top of this cutthroat world that is headed by the Dark Council. At least, that’s how she has to make it look, but Lord Daithni isn’t all about the Dark Side and murder without good reason. And sometimes maybe, when her pilot, Andronikus Revel, tells her she’s beautiful, she kinda likes it. And then they get it on all over the cockpit.

Lerenne has so much on her shoulders. She leads the Inquisition that will close the rifts in the sky through which demons now pour, defeat their evil overlord, and root out those who follow him. Despite stumbling into this role by accident, she has taken on the mantle with courage and integrity, and proudly represents her people, the Dalish – and elves everywhere. She hopes that this Inquisition will help return elves to their former glory. Her strength of character has so impressed Solas, the apostate elf mage who has roamed the world studying history through both reality and dreams. He had little hope for the future of elfkind, but Lerenne has changed his mind. He wants so much to be with her, but he hides a dark secret, and fears the truth will only hurt her. 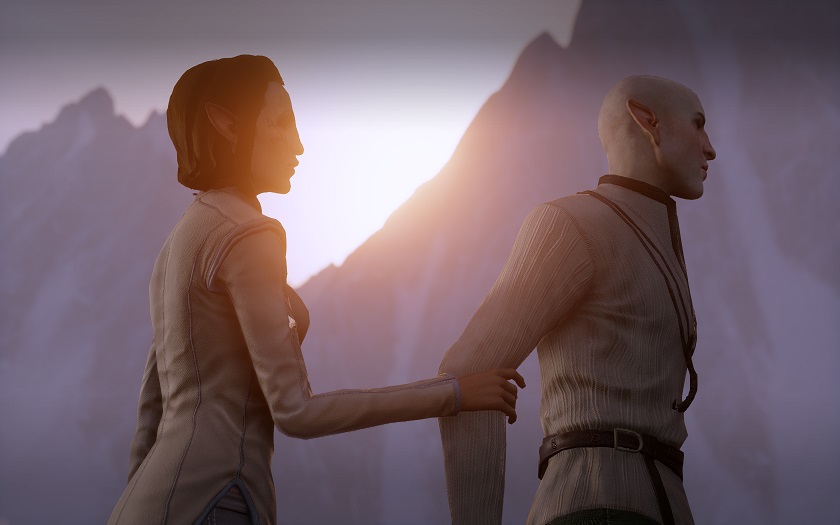 Date Night Destination: A walk through the Fade, conjured to look like a ruined elven temple, overgrown with lush foliage.

Molly Shepard is a soldier first, but sometimes, the weight of the universe depending on her can get to be too much to bear. Liara T’Soni always knows when the commander needs to be reminded that it’s okay to relax and be just human once in a while. 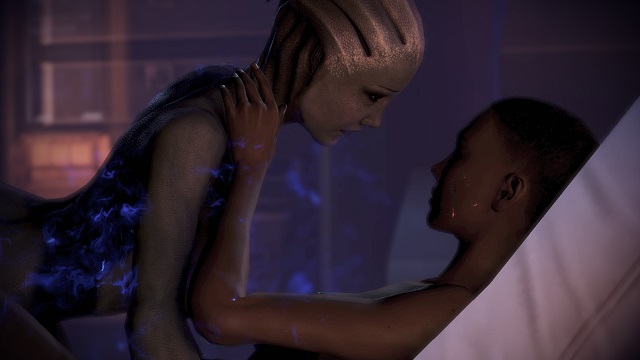 In space, no one can hear you polyamory. (No one, that is, except everyone on board the Normandy.) Liara also understands that sometimes Shepard needs to let off steam with Garrus Vakarian, a fellow soldier with whom foreplay often involves a sniper rifle and calibrations. 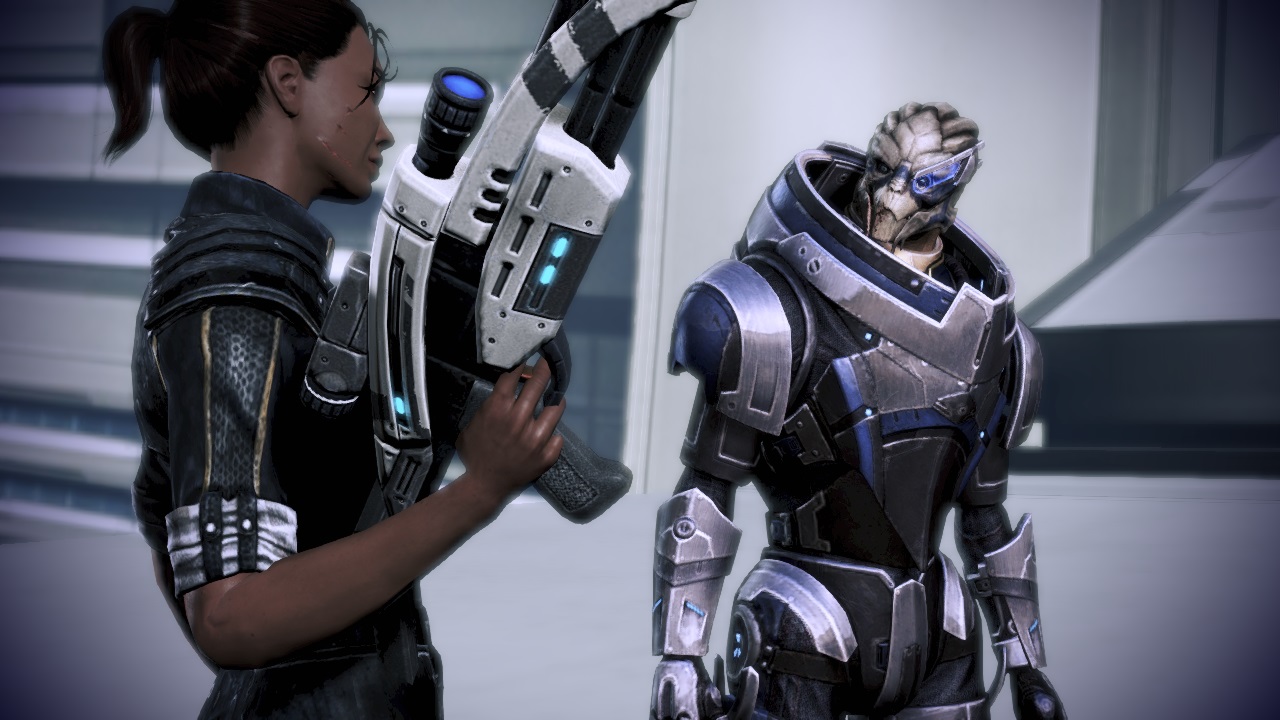 Setting the Mood: Blue Veins, The Raconteurs; Don’t Speak (I Came to Make A Bang), Eagles of Death Metal; Sweater Weather, The Neighbourhood

Fenris is a former Tevinter slave who bears the lyrium markings of his master, a mage. Fenris hates mages. But Fenris would kill and die for Caleya Hawke, an apostate mage who isn’t afraid to use her magic to protect the people and city she has come to love. And while their relationship might seem volatile and one-sided, at the end of the day after saving the city from Qunari invaders, demons, rebellious blood mages, and insane templars, there is no one the Champion of Kirkwall would rather come home to.

Date Night Destination: Snuggled up by the fireplace in the Hawke Mansion’s library with a bottle of wine and some good books.

Setting the Mood: Pagan Poetry, Bjork; I Put A Spell On You, Nina Simone; Fade Into You, Mazzy Star