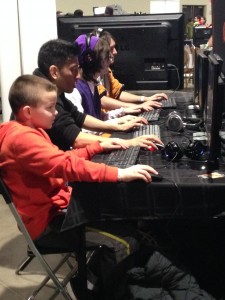 MAGFest, short for the Music and Games Festival, was head-to-head with the inaugural PAX South this year, running January 23-26. Big competition for an event that started in the woods of Virginia and has expanded over 13 years into a nerd bacchanal that anticipates 15,000 plus people over three and a half days’ worth of programming. Whether you’re there for the concerts (which range from power metal game covers to hallway string quartets), the 24-hour free arcade hall, or the immense board and tabletop game library, every day at MAGFest has something for everyone. I was only able to attend for one day this year, but even if you’re there for the whole stretch, there’s always too much to do. I hit up everything I could though, and spoiler alert: it was great! 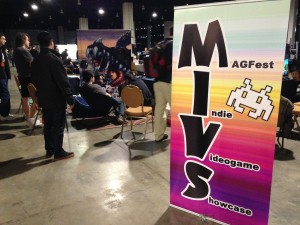 Indie games for everyone!

Two enormous convention halls are dedicated to all manner of video games: arcade cabinets, incredibly old PCs, tiny CRTs with split-screen multiplayer games, and a substantial area dedicated to showcasing indie creators. I’ll admit, as a once-poor fan of arcade rhythm games, I abandoned some of my journalistic integrity and devoted a bunch of time to Pump It Up and watching others play Pump It Up. Also, Time Crisis 2. It was free — I couldn’t help myself!

For a first-timer, even wandering around the arcade halls can be a little overwhelming, but the rooms are well-ventilated, high-ceilinged, and most importantly, the crowd vibe is never stressed or angry, especially compared to 1) actual arcades and 2) game rooms at other conventions. Folks waiting in line are polite and gracious, and no one ever overstayed their welcome.

The MAGFest Indie Videogame Showcase featured work by a ton of creators, many of which were offering demos of their up-and-coming projects. Some themes this year were some elegantly designed arena games, side-shooters and shoot-em-ups, and beautiful puzzle platformers. While I didn’t have time to talk to everyone showing, there were some standouts on my radar that show the variety of the indie game landscape for 2015:

Unfortunately, my dedication to video games meant that I shortchanged the board games section of the festival. But hundreds of gaming tables were active and, during daylight hours, it was rare to see an empty surface. I was impressed by the huge variety of games in play, and in the future, really hope that I can spend some more time with the tabletop section. Also, I spied a group of awesome people playing Bang! with light guns, and I wanted nothing more than to be those folks’ friend.

MAGFest usually boasts panels with YouTube gaming legends (such as Egoraptor and Smooth McGroove), and the always-popular crew at OC Remix. But this year, the panel programming at MAGFest featured something special: a Q&A called Toxic Rage in the Gaming Community led by Arthur Chu and Elisa Melendez. Anyone following the past year’s controversy in gamer culture has read and followed Chu’s passionate writings on the matter, and anticipation of his talk at MAGFest stirred up a lot of rage-in-potentia (which I will not link to, but a quick internet search is evidence enough).

According to festival staff, Chu suggested the panel through normal means — it wasn’t invitational. Still the immediate and vitriolic response was enough to make any outspoken activist nervous, and as recently as November, he suggested via Twitter a certain amount of concern about the mood of the event. On the door outside the panel, it was announced that the Q&A session would be filmed for a documentary; the stakes seemed pretty high.

I want to take a moment now to vehemently thank the MAGFest staff for some great hustle and organization. I spoke to a member of the security team who told me about some of the precautions taken to make Chu, Melendez, and attendees feel safe: the panel was placed in a  smaller room with security at intervals throughout. The door was maintained on both sides, and staff members only allowed as many attendees as there were chairs. A department head oversaw the panel until he felt the atmosphere was safe enough to dismiss some of the security staff.

Arthur spoke for only five minutes before opening up to audience questions. The overall mood was good-humored, and I think both the panelists and the audience were relieved that adequate controls were put in place. Men and women had opportunities to thank Arthur for his efforts, and I for one was deeply happy that his fears about speaking weren’t validated. The most poignant part of the Q&A session was a question about how. How did this all happen to people in the gaming community who are usually portrayed in the media as victims of bullying rather than perpetrators of it? “Nerds thought they were immune to tribalism,” Chu said. “We want to control the whole space.”

Without editorializing too much: it shouldn’t require bravery to host a panel at a gaming convention. This mode of security shouldn’t be necessary, and this level of worry should not have existed. But now that this is the world we live in, I’m glad that MAGFest staff are willing to go the distance in accepting a potentially terrible panel and making sure that everyone involved would feel safe.

Music is front and center at MAGFest, and the big element that separates it from other game conventions. Shows run throughout the day and night, both in the main concert hall and in a chiptunes stage set up in a big corner. A drum and bass setup in a busy corridor inspired an impromptu cosplayer dance party, and some musicians brought their instruments just to busk in the halls. I heard from one guitarist of this last mode — not a professional, and certainly not a headliner — who was thanked for playing in the hallway at MAGFest 12 with official MAGFest gear. 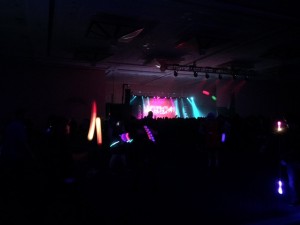 A packed crowd for Yuu Miyake

Two stages are set up at opposite ends of a long convention hall so while one band is playing, the other stage can be prepared for the next act. The transition is seamless, with audiences milling from one side to the other or bailing for water or other activities. This year’s headliners included several nerd favorites: The Protomen, MAGFest regular DJ Cutman, Bit Brigade, and a DJ set by Katamari Damacy composer Yuu Miyake, and more great musicians than I can even list.

All of the shows, even the afternoon openers, had a lot of energy — the audience was intent on encouraging the performers and vice versa. It was exciting, as a veteran of MAGFest 12, to see some of the acts advance to a higher billing and get more traction at the show and beyond. 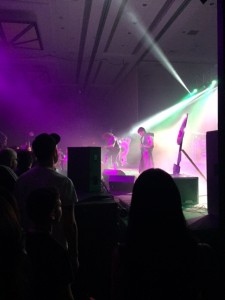 My personal fave? The power metal cover band aptly named Powerglove. Hearing a blazing cover of “Heffalumps and Woozles” is disorienting enough, but they followed it up with the opening from the X-Men cartoon. (Full disclosure: I rocked out so hard to the latter that my neck is still recovering.)

Even in the throes of complete joy at some truly crazy drumming, I caught a dedicated Arrow cosplayer rocking out just to my left and a woman dressed as a Tetris L-piece carefully negotiating her costume through an enthusiastic crowd. I know I’ve rendered a lot of glowing praise for the festival, but its most important and most successful mission, I feel, is showing that music and games are by everyone and for everyone. 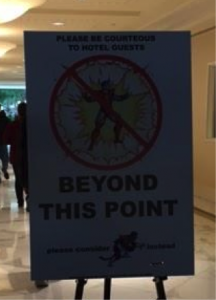 The Colossus roar: an unmissable meme of MAGFest, and evidence of how courteous MAGFest attendees can be for their hosts.