January is Amnesty Month! We’re writing about things we missed in 2014.

Just a month after the maligned and female-less co-op mode launch of Assassin’s Creed Unity, another development team at Ubisoft Montreal was celebrating some great news: the “playable poem” Child of Light had officially turned a profit since its April 2014 launch. Child of Light was marketed on its beautiful, hand-painted backgrounds, the fairy tale setting of Lemuria, and its throwback to JRPG combat. The game is rated E (for everyone), but as an adult playing the game, I found it lovely and charming, but lacking the depth I’m hungry for as a gamer. 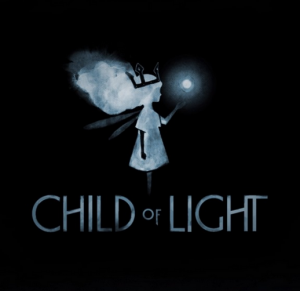 On casual mode, you can run through Child of Light in about 15 hours, depending on how many side-quests you chase and how much time you dedicate to crafting power-up gems. Despite the initial controversy around the two tiers of difficulty, I found that expert difficulty put the engaging gameplay front-and-center, and casual mode was a great way to immerse myself in Aurora’s story and the world of Lemuria.

Child of Light is a runway model dress: at every turn, from every angle, the game proves itself to be carefully designed and elegantly crafted. As Aurora, you run, then fly through levels that feel like platformers, avoiding wall spikes, dodging obstacles, and solving simple puzzles with levers and weights. The puzzles are easy enough for a child to understand and don’t scale with difficulty. All of the enemies appear on the map, and a patient player (or diligent co-op partner) can probably dodge most non-boss encounters.

The combat is noteworthy. Venerators of JRPGs will appreciate the almost turn-based system—the game pauses to let the first player scroll through a menu of combat options, including a handful of attacks, magical spells, and usable items. However, there is a timed element: once you select an action, a faster attack can interrupt you and push your character back on the timeline, and, similarly, you can interrupt a slow-moving opponent. Juggling these timed elements for interruption-vulnerable enemies is the only way to win on expert mode. 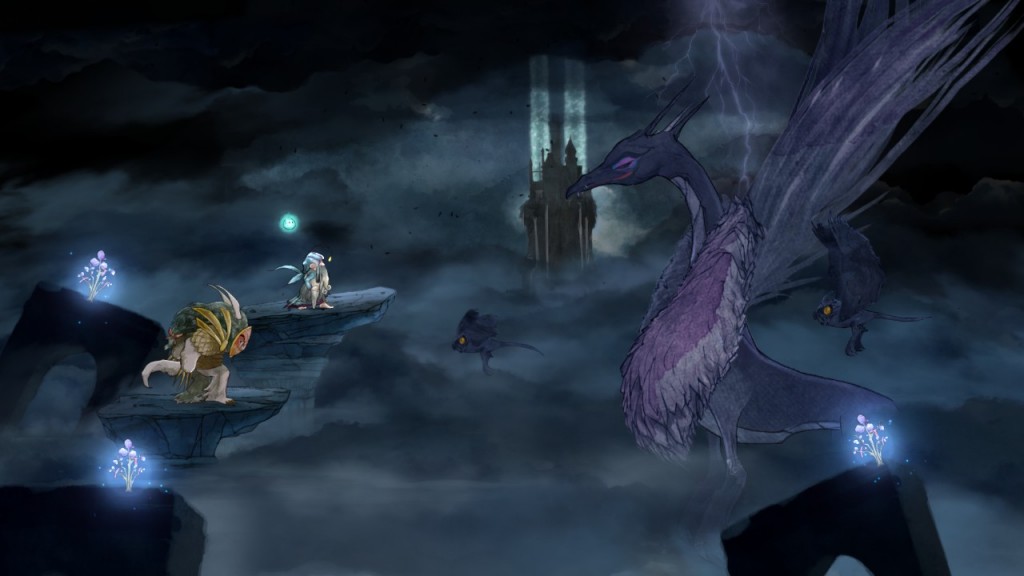 Even the combat scenes are beautiful.

Thankfully, you have help. In combat, your sidekick firefly Igniculus can use some of his light power to slow enemies, heal allies, or collect on-screen lights that refill light, HP, and MP. A second player can join the game on the fly, and control Igniculus for you—coordination and teamwork are key. Outside of combat, Igniculus can stun enemies so you can fly by them, and also collect items on his own. This mode of co-op will seem familiar to fans of Super Mario Galaxy and adds some stress and fun to the harder boss fights.

Full disclosure: I do love old JRPGs, but, in my old age, I’ve found some parts of them to diminish gameplay rather than enhance it. Child of Light does deploy one of these more tedious elements: skill trees. Don’t get me wrong! I love a skill tree when it’s meaningful and changes gameplay—I’m looking at you, Borderlands franchise—but there’s also an elusive, random-looking leveling system that never works for me. Although Final Fantasy X-2 was certainly not the first offender, it made this kind of skill grid way more iconic, so let’s call it the Dressphere system. 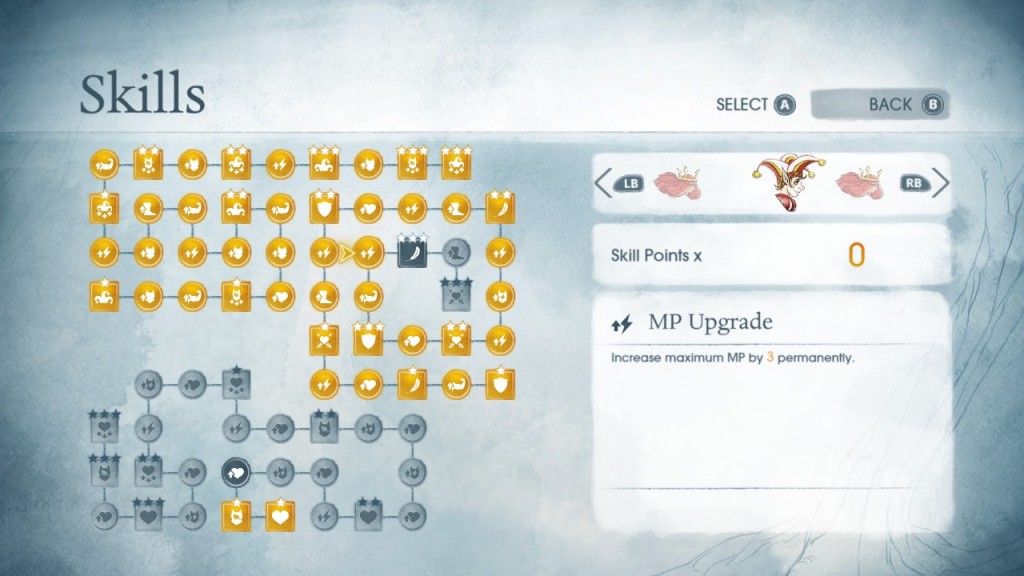 Why make this confusing? Why is it different for everyone?

Most of the trees in Child of Light are very linear. You get an extra point of MP here or another tick in strength. Every once in a while, you level one of your base attacks or a passive ability that grants on-board bonuses to your playable characters. Experience bonuses can be granted with crafted gems, but other than that, everyone levels at a fairly similar pace and essentially just becomes a stronger version of themselves. Why, then, make the skill grid random for each character? Between play sessions, leveling becomes a confusing task, and you’re forced to remake decisions and parse out the convoluted graphs each time you play. Down with dresspheres, I say! Linear leveling in 2015!

It’s so easy to be charmed by Child of Light. You play as Princess Aurora, the youngest of three daughters who has died in her world, and landed in Lemuria, a magical realm that’s been overtaken by the evil queen Umbra. “What is a princess?” Igniculus asks at one point. “Why, the daughter of a king,” Aurora replies. All of the game’s dialogue is written in rhyming verse. And since hardworking designers deserve credit, I have to commend the development team’s choice of font and fades for the text boxes: they’re legible, easy to read, and perfectly kid-friendly.

The cast of playable characters is so darling: from a capitalist archer mouse to a pair of inept circus clowns, to Aurora herself, who for most of the game’s combat struggles to keep her sword up and her princess crown on (watching Aurora struggle, then drop her sword behind her is one of the most adorable animation loops in any game). After each character joins your party, they interact with the other characters in a brief dialogue. The effect is simplistic, but really makes you feel as if the characters are invested in each others’ well-being, which makes the feel-good message at the game’s end less saccharine and more relatable. 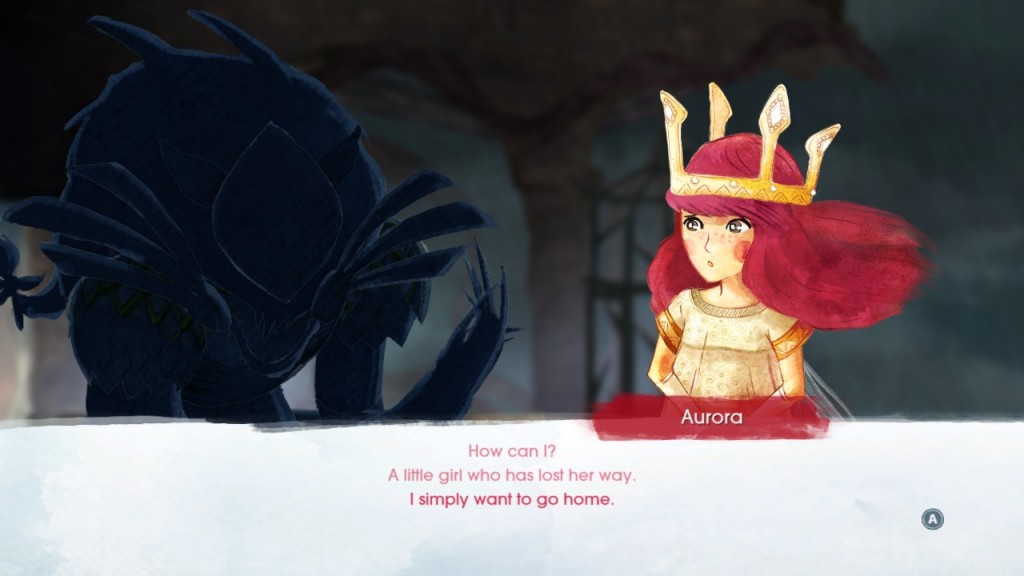 But here’s where I run into trouble: I don’t know who this game is for.

Child of Light’s story is perfectly calibrated for kids. At the end of the day, it’s a game about a little girl growing up and saving two worlds. The message is right, the story is focused, and even the bleaker moments of the game are never too scary. After a betrayal, Aurora returns to Igniculus, who asks her why she left her friends behind. Aurora says, “Sometimes we grow when we are alone.”

In terms of gameplay, however, the experience seems designed for adults. Even on casual, some of the combat timing can be treacherous, and I can’t imagine having a child field either the first or second player, let alone coordinating both simultaneously. And parsing out the skill grid and making crafting decisions: these seem like jobs for a grownup too. I think that’s why other reviews have expressed disappointment with the admittedly tired story; if you’ve got a good guess for the main villain’s evildoing within 30 seconds of the game’s opening, you’re probably right.

There’s also the Confessions. At first, these floating sheets of paper on the map seem just like flavorful tidbits, but after the turning point of the plot, you collect some that seem to allude to an Alice in Wonderland-type frame narrative, where a young girl runs away from home. These Confessions aren’t illustrated, and have elevated vocabulary. Someone on the Ubisoft Montreal team was trying to hint at a bigger world, or at least a more complex metaphor. Combined with the children’s story, this note seemed discordant to me.

That being said, Child of Light feels like a miracle. A well-designed, kid-friendly game! A well-traveled fairytale, but charmingly expressed! A challenging game with a little something for everyone, and, in my opinion, a lot more to give. The game’s creative director has claimed that the game’s profitability may mean a sequel in our future, and I want deeply to spend more time immersed in Lemuria. 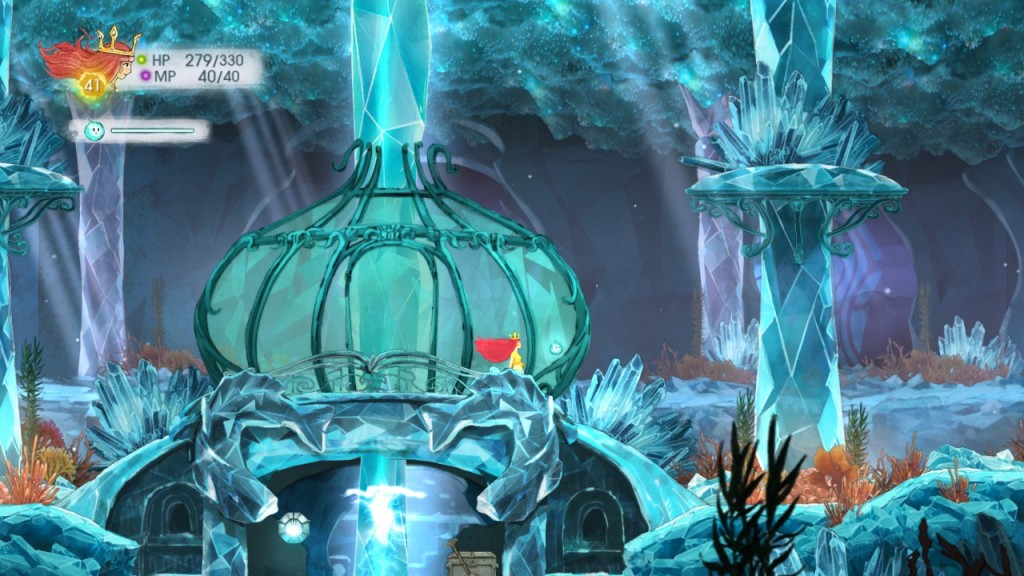