In Defence of Waiting: SimCity BuildIt and Two Dots Can Last Forever

SimCity is the only game franchise that’s posed a credible threat to my life. (Not really, but work with me, people.) I was thirteen, I had cheat codes, paper route savings to provide me with candy, and far too much time on my hands. Thirteen–also the number of hours I played it, each day, until I finally cracked, burned my city to the ground, and moved on with my life, playing SimCity only in more reasonable chunks.

I’m playing SimCity again and this time waiting is built into the game. SimCity BuildIt is a free-to-play app game. It replaces the more traditional SimCity game that EA had developed for mobile, found less than monkey-making, and removed from app stores. 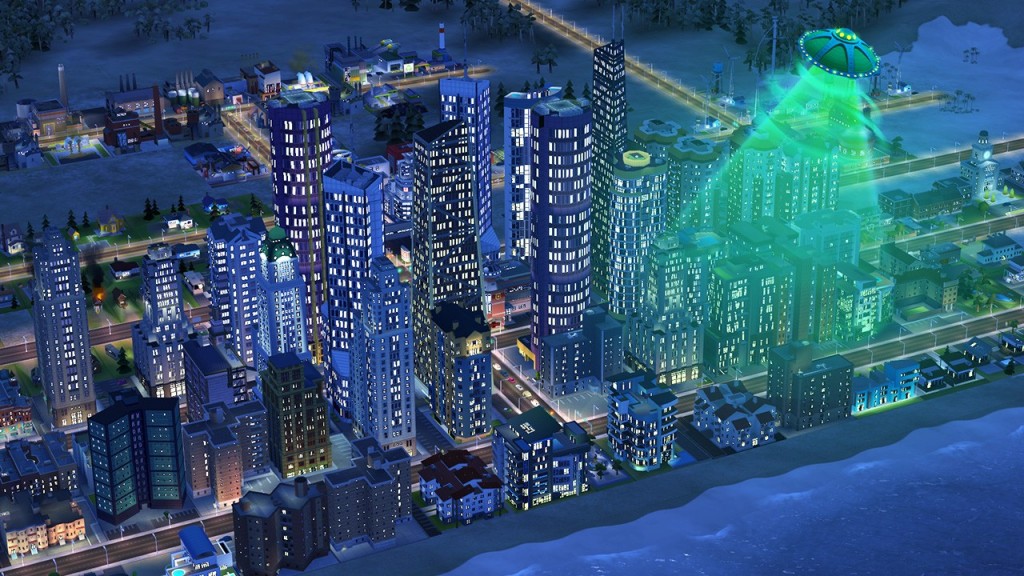 As with other free-to-play games, SimCity BuildIt is supported by micro-transactions. This has infuriated many Sim fans–predictable, as there’s a history of fans feeling betrayed by their beloved game franchises moving to mobile and becoming frustrating, nickel and dime disasters. Unlike some free-to-play games, though, micro-transactions aren’t necessary to SimCity success–patience will do just as well. Your Simoleans are running low and the game suggests buying some Sim Cash to supplement your operating budget. Should you do it? Walk away, time keeps moving in the game, even when you’re not playing. Your Simoleans will be replenished.

SimCity BuildIt is game of urban planning and commerce: buying and selling goods is the best source of the simoleans you need to expand your city; that said, you do still collect taxes and provide goods and services to your Sims. There’s a bit of Tropico style micromanagement to this latest edition–but without all the assassinations and surveillance. Balancing these two roles, mayor and trade board president, is the key to success. Your infant city comes with a highway onramp, a purse of simoleans, and what I, like all parents, want to believe is unlimited potential. The first steps should be familiar: build a stretch of road and along it, zone residential and industrial. In SimCity BuildIt, residential zones must be earned though population and developer pressure but are free to zone. Industrial areas deplete your simoleans, as you build and upgrade them, but are doled out based on population alone.

See that construction hat in the screenshot below? That’s a residential unit ready for upgrade. In order to make that upgrade happen and increase both your population and coffers, you’ll have to satisfy the developer’s requirements. Can your factories produce steel? Great! You’re going to need a lot of it. Also wood, plastic, and seeds. As your city grows and you continue to level up, those requirements become more complicated. Now the developers want measuring tape, bricks, furniture, and even food! (Constructions workers, amirite?) Sure you’ve got factories and homes, but in order to meet these new requirements, you’ll need to build commercial units too, starting with a building supply shop, a hardware store, and a farmer’s market. It only gets more complicated from there. Don’t even talk to me about upgrades that require red, high top sneakers. Luckily, as you level up, you gain access to intercity trade. At first you can only sell to your own Sims, then to other cities, and finally, you can buy from other cities; real cities, run by other players. Trading offers you a glimpse into these other cities–you get to sneak a peak at their development, including their population and simolean levels–and some relief from meeting ever more dizzying and unfathomable upgrade requirements.

As mayor, you also need to check in with your citizens. You do this by monitoring their happiness (there’s a meter), tapping on residential units to get a reading on their feels (“:( unhappy living next to a garbage dump”), and by tapping on the thought bubbles you can see in the screenshot below. Communing with the people earns you their confidence and all kinds of special items necessary to growing your city: items to upgrade your storage facility, items to seize more territory, and eventually, items to invite a mad scientist by to wreck your shit. Instructions are mainly visually represented, but you do have advisors who will pop up with tips, or to relay the news that you’ve fucked up royally with your latest expansion, leaving your Sims without water or firefighters. (I have never done this. Especially not on purpose.) 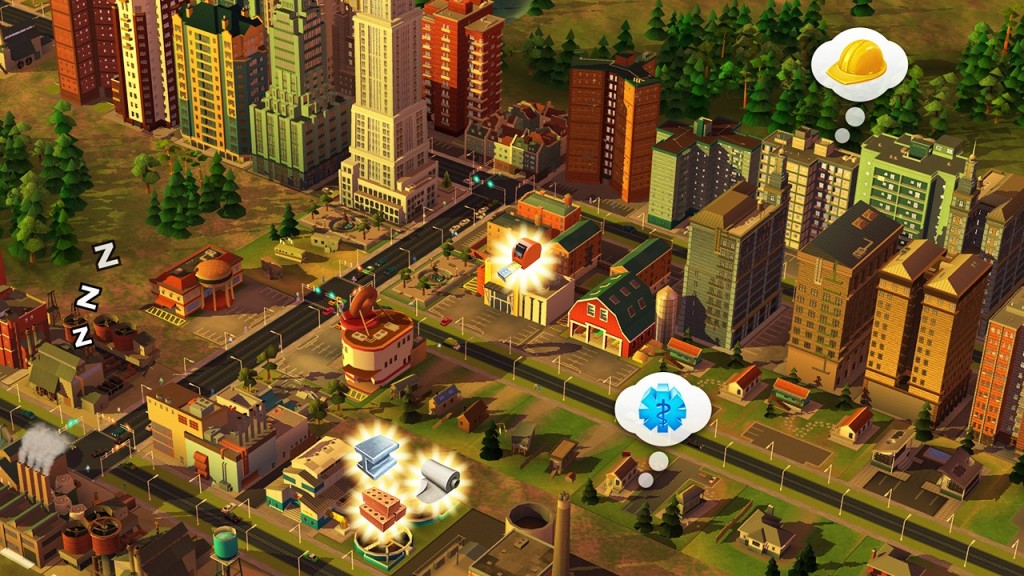 Gamers have soured on free-to-play games, often arguing that they’d be happy to pay five or so dollars upfront, if it meant bypassing prompts for micro-transactions and even hard paywalls. (Five dollars, though. I mean.) Free-to-play games are moving away from hard paywalls towards simply prompting micro-transactions, giving players a choice: think your way through (as in the case of puzzle games like TwoDots) or pay; wait until you have all your pieces in place (as in the case of SimCity BuildIt or Clash of Clans). There are, of course, also micro-transactions geared towards our impulse to exclusivity, special objects or features that can only be accessed through an infusion of real cash money into the game, and not through clever gaming. Well, buy your “exclusives” if you like, or earn something even more exclusive through playing the game–the choice is yours and the setup is hardly predatory.

Predation is a common description for developers’ move to the free-to-play model. Gamers are trapped, forced into micro-transactions by poor game design and cutthroat publishers who know they’ve got a captive audience. I’ve seen micro-transaction “traps” compared to video poker machines, ubiquitous in many regions, that prey on problem gamblers. But let us be clear: problem gambling affects less than 5% of the population; the rest of us are not experiencing norepinephrine lows. Certainly the affect of micro-transactions on this group is worth studying, but the vast majority of us are not problem gamblers, and when we cave to a prompt and pay our way over a hurdle, something quite different is going on. What we are purchasing is not a chemical thrill, but time, convenience, and comfort.

How frustrating it is, to hit the wall in a game–I’ve given up games over it so many times. And then, grinding–who wants to play for days and days just to level up? Well, me. Sometimes. Waiting, frustration, and grinding might just be evil. Or maybe, they’re not. They can be bugs and features, depending on the purpose of the game, and how players engage with it. While grinding can ruin the experience of a roleplaying game, it’s beneficial to puzzle and strategy games: repetition with variation is how patterns emerge. Cheat a puzzle and there is no game, just cheap reward.

I’ve been playing TwoDots for months now, and I’ve suckered five friends into it too. TwoDots is the followup to the popular Dots puzzle game. It’s fucking great. It too, is free-to-play, offering micro-transactions to carry you through when the going gets tough. And it does get tough. It’s a deceptively hard game, with “simple” puzzles that get increasingly life-destroying. As you progress through the game, you’re asked to break more complicated combinations of dots–not just eight blue, three orange, but now “ice” and “fire” dots, and while you’re at it, sink some anchors. The game explains this to you in tiny blurbs, but it’s up to you to figure out what these blurbs actually mean, and how you can develop a strategy around them. Like SimCity BuildIt, success is a matter of planning ahead, and lining your pieces up just where you need them. Unlike SimCity, TwoDots offers you no trades, and no respite from puzzling.

The puzzles operate on a simple principle: if you can draw a horizontal or vertical line between two dots of the same colour they will disappear, allowing the dots above them to drop down; meanwhile, new dots drop into the puzzle. If you can form a square of four dots, every dot of that colour will disappear. If you can draw a square around a dot of a different colour, that dot will disappear too. A special torture is that you have no idea what colour of dots will drop next. There is some solace in TwoDots, though, in the form of special items that will help you to bust through especially frustrating puzzles. Earn a good score (measured by moves, not time) on one puzzle and you may earn extra lives, bombs, or pickaxes. Use them sparingly, friends. If you’re stuck on one level, you may be stuck on the next one too, now with no special items to bail you out.

Ardo and I have been playing since November in our free time time. Our friend David Uzumeri started about the same time but blazed through it, and now eagerly awaits every update of new levels. The thing is, none of us get through the game using micro-transactions. Here’s how the game works: each level has a particular dot-breaking challenge; if you fail, you lose a life; if you use up your lives, you wait. Here we are again, at that most tempting of micro-transactions: time. Not just time in the game, but time to success–every time you’re kicked out of the game, it’s a setback in beating it. Ardo and I had dinner last week and spent, no lie, about fifteen minutes talking about TwoDots, and we both came to the same conclusion: put your phone away, give your brain a rest, and come back tomorrow to kill that level dead.

Or wait even longer. The beauty of waiting is that it extends the puzzle, giving it a new dimension of frustration, thereby extending the pleasure of the game. What I mean is this, the waiting part of free-to-play games is its own challenge–can you beat your impulses? And can you think of a better way to do it while waiting? Free-to-play games, probably accidentally, have made access to the game a crucial part of strategy in long-running games like SimCity BuildIt. In puzzle games like TwoDots, they’ve imposed a kind of gameplay, short bursts of puzzling on transit, longer stretches on the couch, that’s variable but satisfying, and that allows the game to occupy space in your life longer.

By nature I’m an impatient, cranky, child-woman, so it may seem strange that I’m advocating slow games, long games, and games that make you wait. But here’s the thing: slow, pretty, repetitive games are meditative; as relaxing as they are challenging. It’s no coincidence that SimCity BuildIt and Two Dots are both cute as fuck, and that they have pleasing music and sound effects (Two Dots‘ are better)–it’s all part of the experience. Success in these games is rewarded by a brief graphic, a nice sequence of tones, and a few words of approval. Then, almost immediately, there’s a new and tougher challenge to think through. This is part of waiting can be made to work for a game, rather than against it: there must be a reward for the wait, one greater than just more time in the game. The reward in SimCity BuildIt and TwoDots is a new challenge, always a slight variation on the old one.

In SimCity BuildIt I’m the mayor of about 150,000 Sims and my Simoleans are dangerously low because I overextended myself in my last expansion. In TwoDots, I’m mired somewhere between the ice and fire levels. I play them when I have time and when I have interest, and they fill a niche in my life that RPGs and FPSs, never great on mobile, don’t.

So it may take you weeks to build the city of your dreams in SimCity BuildIt. #shrug In the meantime, you’ve got a thousand challenges to beat and a thousand more Sim-needs to meet (or not, as the mood strikes).

So you don’t beat Two Dots in a week. Who cares? It’s so goddamn pretty.