Making its Kickstarter debut on Tuesday, Exploding Kittens met its $10,000 goal in 20 minutes and as of this writing has hit the 2.5 million mark. The game was created by Matthew Inman of The Oatmeal, Elan Lee, former Chief Design Officer for Xbox Entertainment Studios,  and Xbox/Marvel game designer,Shane Small. 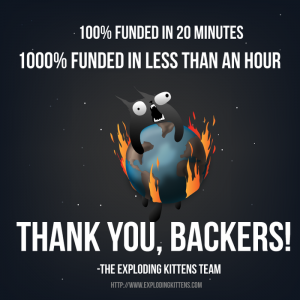 As a fan of the Kittens in a Blender by Redshift Games and since one can never have enough games with “kitten” in the title,  I took a gander at what Exploding Kittens is offering.  During Wednesday’s lunch break, in the five minutes I viewed the page, the backer numbers changed every five seconds. It was like watching my own stock ticker for games!

According to the campaign, the main idea is to avoid the Exploding Kitten cards. If you get an Exploding Kitten card and have no cards to pass it off or mitigate the damage, you’re out of the game.  The action cards in the game are set with ridiculous art and pretense, for example skipping your turn by wearing a portable cheetah butt or diffusing kittens with catnip sandwiches.

Since I’m not a big fan of games that rely on luck versus strategy, I’m curious about the game mechanics. When someone is kicked out of a game and has to watch from the sidelines, it’s not as fun as everyone playing together until the end. My only exception to that is Cthulhu Dice, where game play happens so fast that everyone is out in the blink of an eye. With regards to Exploding Kitten cards, I’m curious about to playable actions: can you use more than one action per turn to bounce the exploding kitten around or what’s the probability of getting an Exploding Kitten before you have strategy cards to handle it?

If you’re interested in a review when the game comes out or a side-by-side comparison with Kittens in a Blender, let me know in the comments. With 28 days left to go, I’ll probably back the project. Curiosity, after all, killed the cat.