Welcome to the Games Section’s first monthly roundtable! Every month we will address a pressing issue in the world of gaming.

(Working definition of gender modified from World Health Organization: “the socially constructed roles, behaviours, activities, and attributes that a given society considers appropriate” for each gender.)

Every year is, in some way or another, a “bad” year for women and video games. This past year I have found this to be particularly apparent. International news sites and TV news anchors have reported about all of the Gamergate controversy, pulling the scary, sexist side of gaming culture into the mainstream spotlight. There were also a smattering of articles this autumn pointing out that more women game than men, yet representation of strong cis women in games continues to be spotty at best, and representation of identifiable trans women in video games is almost nonexistent.

As a sidenote, I am fascinated by the way certain games change their npcs reactions to your character based on gender. I wouldn’t say femShep in Mass Effect is a good example of my idea of what it means to be a woman, but I did admire many things about her.

Theresa E. Garcia of TransGamerSociologist compiled a list of transcharacters in video games, and it is depressing and sparse. However, Dragon Age’s Krem is a trans man voiced by Jennifer Hale. My heart basically beat out of my chest with excitement when this was discovered. This is an important step in the right direction, and I hope other developers are taking notes. It is truly confusing to me why I cannot choose to be genderfluid, or third-gendered, or anything other than “female” or “male” in games such as Oblivion. My character is not marrying/having sex with/mating with another character at any point, so it’s not even a political stance.  And why are the Argonian and Khajiit limited by conventional, outdated human sex and gender? I just think there is so much missed potential here.

I suppose the easy answer to this question is The Sims. I can make my woman or man Sim act any way I please, and sexuality has always been fluid for Sims characters. However, even this is limited, and as I have complained before, they’ve added ridiculous descriptions to the voice descriptions that genders my Sims in a way that makes me uncomfortable. 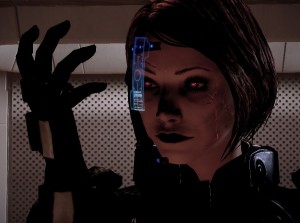 What I liked about Mass Effect was that, for the most part, Commander Shepard is a good example of what it means to be a soldier, a leader, and a human being. However, there are a few irksome moments during the series where a female Shepard’s gender is specifically called out in the dialogue and her merits questioned because of it. This is not uncommon, and appears in other mediums where the woman has to prove herself worthy. Perhaps the writers believe they are offering a GRRL POWAH moment where a woman can show she’s not only equal, but better, but what they don’t seem to realize is that by writing these moments, no matter how small, it tells me that my character has started one step behind a male character, despite having the same skill sets on their character sheets.

I will give the new and improved Lara Croft her due. When Tomb Raider was first advertised using a cinematic clip that showed Croft being sexually assaulted, I was firmly in the DO NOT WANT category regarding the game. Trailers have improved since, and based on this far more empowering trailer, I decided to play it. The new Croft is allowed to be weak. She’s allowed to be strong. She’s allowed to be human and can be admired for more than just her physical assets, as she once was.

There are still some niggling elements written into female characters like these that trouble me, but for the most part Croft and Shepard are the kind of characters that I want to see more of in games, where their skills and merits go well beyond gender, yet they are still clearly women. They can be sexy, they can cry, they can punch people in the face, they can sacrifice, they can lead, they can survive, and they can win.

That said, I am also a fan of Bayonetta who is a character that some might despise for the very reasons I love her, as described in this article:

“Bayonetta takes the video game sexy woman stereotype from object to subject, and it’s tremendously empowering. The title character uses the mantle of her sexuality as a power source. Between Bayonetta and her equally fierce rival, Jeane, it’s a women’s world — the boys just play in it. The Umbra Witches aren’t to be messed with. With this unique theme, the game itself is an artistic representation of the concept that female sexuality is its own kind of weapon.”

The game (I’ve only played the first) appeals to my White Queen ideals regarding the power of sexuality. Unlike Shepard, Bayonetta never has to prove herself as a woman. She wears her mantle proudly, and the game is not filled with enemies calling her a “bitch” etc, or making lewd comments about what they might do to her upon her inevitable defeat, as with Batman: Arkham City.

Another thing that really bugs me when it comes to gender in fantasy games (as well as other mediums) is that developers still cling to very human characteristics. As a result, we get things like female lizard people with breasts. Has no one ever taken a biology class? When was the last time you saw a snake with boobs?

I have literally no idea, and I’ve avoided adding to this doc so far because this is a terrible fact.

In the past year I can name a couple games that, in my opinion, handle the subject of depicting women and other genders without constantly calling attention to it in a manner that’s either pandering, misogynistic, or too ham-fisted.

Nuclear Throne, an early access game on Steam, is especially notable as a fantastic top-down roguelike set in a post-apocalyptic world filled with aliens, mutants, bandits, and time travel. So far the game has a roster of twelve playable characters and out of that there is a very even spread across the board: five characters are specifically given male pronouns, four characters are specifically given female pronouns, and three are specifically given gender neutral (it/they) pronouns. And of the, ostensibly, women characters they come in all shapes and variations. We have Crystal, a big sentient purple stalagmite who can turn into a giant crytal to shield herself. Next is Chicken, a sword-wielding anthropomorphic chicken who can still survive for a short time once killed (much like any headless chook). Then there’s Rebel, a scarf-clad-desert-wandering bandit who can summon help in the form of another bandit. And finally, the only human character is Rogue, a black woman who is a former inter-dimensional cop who is now on the run from the force.

I really enjoy these depictions because both in the game’s simplistic sprite and official fully-rendered art, none of these characters are ever oversexualised in any capacity. Crystal is a big lumbering piece of gemstone and rock, Chicken is incredibly androgynous in terms of looks and is essentially a vicious animal, Rebel is entirely covered in wrappings and her scarf with only her eyes visible, and Rogue is wearing a wholly unisex uniform with armour and faceplate. It also shows that anyone can be a woman, and is allowed to identify as one, without it depending on physical attributes or any common standards of beauty and aesthetics.

As an afficionada of violent shooting games, I came up a little empty. Female characters have a history of being badass then explained into oblivion, or hilariously problematic to begin with. Poor Samus Aran, who had to face The Other M (spoilers: it’s motherhood!) but not in a meaningful way. And who could forget the classic Parasite Eve, where Adam is the source of DNA, and Eve is the source of mitochondrial DNA, which I guess is where evil/monsters come from.

For that, I turn to a classic: Final Fantasy 6. 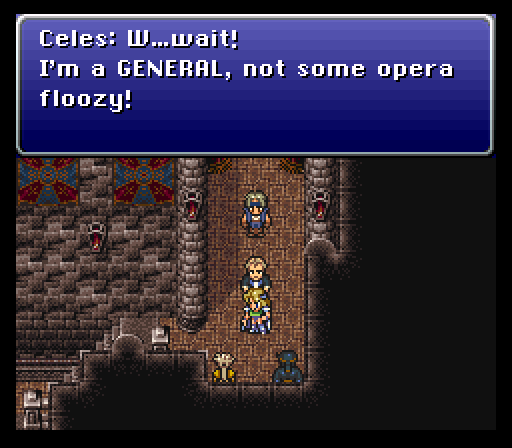 Not only is Celes Chere a powerful heroine, but she also responds to the characters around her in a way that never relinquishes her femaleness and her heroism. She learns lessons from her love interest, but also from Terra, and through her adventures finding the other characters in the world of ruin. She’s not only strong, but you get to see her trying to own femininity, as well as her fighting spirit.

The player gets to see Celes juxtaposed with a ton of other female characters, each with memorable personalities that all help define the possibilities of what it means to be a lady. But most amazingly, you get to see Celes, a brainwashed general, playing acting as a superstar opera singer, who is herself depicting a woman in the middle of an epic love triangle. FF6 does a great job not just depicting femaleness, but exploring its boundaries as well.