Inquisition Diaries #9: Hate the Playa, Not The Game

PREVIOUSLY ON INQUISITION DIARIES: It wasn’t divine intervention that saved Lerenne from the explosion at the Conclave, it was Divine intervention, and the spirit of the Divine continued to help Lerenne when the Inquisitor fell into the Fade. 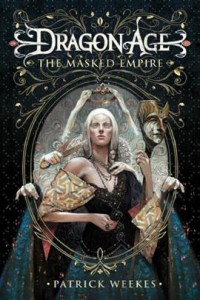 Everyone is recovering from Adventures With Your Worst Nightmares in the Fade, and spirits are pretty low. The obvious solution is a party! Although this party has some significant political motivations, based on the civil war that transpired in The Masked Empire. Remember when we jumped into the future and learned that Empress Celene of Orlais would be assassinated, thus paving the way for the Tevinter Imperium, led by Corypheus, to invade and turn the world into a demon-ridden mess. While there is some bad blood between Orlais and Ferelden, where the Inquisition is hanging out, that’s all in the past and I’m not sure why we would need to go into the future to find a reason to seek Orlesian support. But I’m not the one writing this game, so who am I to judge the poorly written time travel plot device. To the Winter Palace we go! 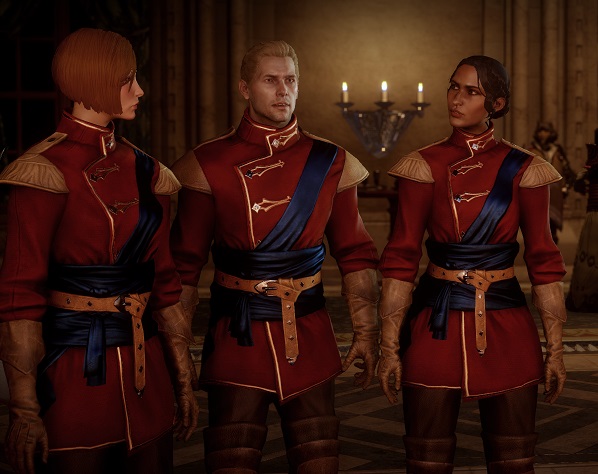 The Inquisition Posse, dressed to impress.

In Orlais, we are greeted by Gaspard de Chalons, cousin to the empress, who wants her throne. We also learn about The Grand Game, which is something all Orlesians play. But instead of fun and laughs, losing can result in utter disgrace and/or death. Lerenne must obtain the approval of the Orlesian court in order to successfully acquire Orlesian support. Unfortunately, as a “dalish savage,” Lerenne begins the evening with a ten point loss, leaving her at 30/100 approval.

Approval can be earned by appropriately responding to the nobles, and obtaining juicy secrets. It is lost by being boorish, or by being absent from the party for too long, which is a hindrance when it comes to all the exploring required to piece together the mystery of who is out for Celene’s blood. Gaspard is the obvious choice, but Empress Celene’s bitter ex-lover, an elf named Briala, is in question too — but, as we learn, the elves aren’t fairing too well in this party either, with many of them turning up dead in the servants’ quarters. 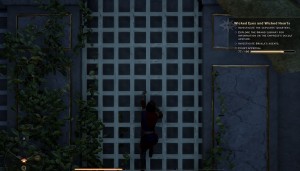 But first, Spymaster Leliana warns that the Empress now has an occult adviser that Leliana knows and does not trust one bit. Our investigation leads to the grand library, which is inconveniently locked. But I could access it from the garden full of party guests if I climb this convenient trellis. Let me tell you how I ran around the palace for a good ten minutes trying to find another options because surely this dalish savage would be thought rather uncouth if she just started climbing up the wall. 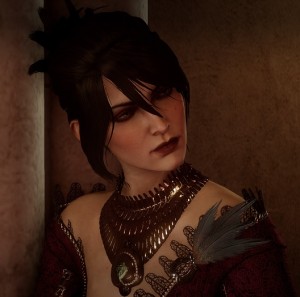 Access to the library is gained, but more importantly, a path of blood spatter leads to murdered folk and incriminating notes. Upon leaving the library, the mysterious occult adviser reveals herself to be Morrigan, the witch of the wilds. Apparently, after running off and hiding after DAO, she’s now found a place at the empress’ side, advising her on all things dark and magical. Morrigan is her usual aloof and cryptic self, but implies that we might be working toward the same goal regarding keeping the empress safe from assassins — especially since she’s the one who killed a Venatori intruder Lerenne finds. Morrigan gives Lerenne the key to the servants’ quarters that was on the body so the Inquisitor can follow up on the whispers she’s been hearing about nefarious deeds down there. 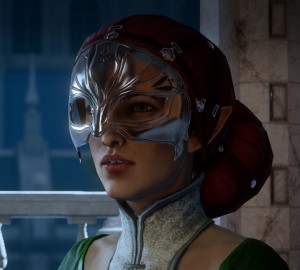 Lots more dead elves lead the Inquisitor and her team to skirmishes with the Venatori, as well as Briala, who skillfully kills one. Briala expresses her suspicion of Gaspard, after she and the Inquisitor find a person murdered with Gaspard’s dagger. Briala offers elven support and secrets, which Lerenne is very much interested in.

After some more detective work, Gaspard’s sister Florianne approaches the Inquisitor and invites her to dance. Refusing is a huge faux pas, but accepting and pitting wits with her during the conversation earns an easy 100 approval. 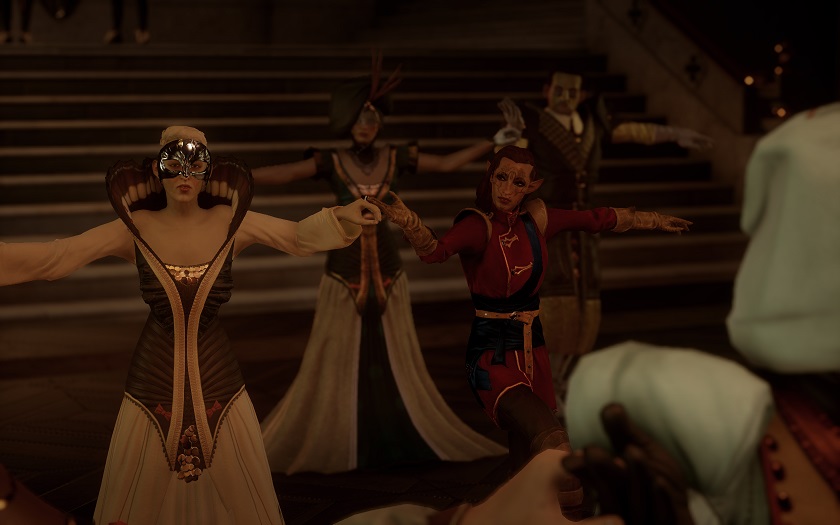 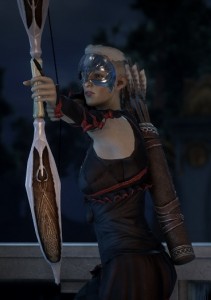 Florianne reveals that her brother is planning something, and she can prove it if the Inquisitor will meet her in the dark alley way in the back of the palace. Shockingly, this turns out to be a trap. Florianne is working with Corypheus and has been promised rule over Orlais if she defeats the Inquisitor. Following the battle, Lerenne can choose to have Florianne detained, but this leads to a blood bath when Florianne reveals that she’s actually a ninja. This option also means I do not get my precious “Belle of the Ball” achievement for earning all the approval. Despite actually having 100/100 approval, to truly win the Game, Lerenne has to confront Florianne and deliver a nice “INURFACE” speech that results in her being arrested.

With all the pieces of the puzzle in place, Lerenne meets with Gaspard, Briala, and Celene and has the opportunity now to decide the fate of Orlais’ leadership. It turns out that all three of them were playing dirty, as is to be expected, and initially took the option to also give them an “INURFACE” speech, ordering all three of them to work together because the Inquisition owns you now, bitches! But since I am roleplaying this as Lerenne working really hard to raise the elves’ status, I went with the option to execute Gaspard and reconcile Briala and Celene, which results in Celene giving Briala a position of great significance. 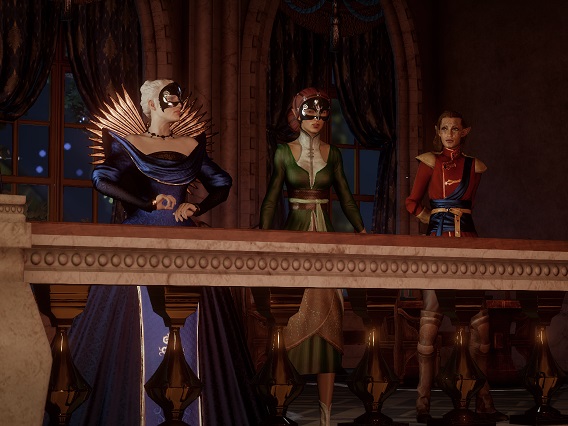 With all that finally sorted, Lerenne is given no time to rest. A representative from the Chantry is here requesting that Leliana and Cassandra (whom we learn has at least five middle names, based on her introduction at the ball) be handed over because they are wanted to take the place of the Divine. Waitaminute! I wanted Mother Giselle to be the new Divine! Fine fine, I can handle Cassandra as Divine, and Vivienne supports me on this, but Lelianna? She’s been getting a little too liberal with her stabby stabby. Vivienne also becomes an option, but I don’t trust her utter disdain for the little people. 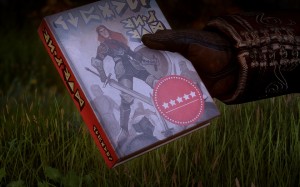 More importantly, I want Cassandra for president because I’m sure she will make trashy romance novels a mandatory part of her reign. In one of the most delightful companion moments, Lerenne catches Cassandra reading Varric’s romance serial, Swords and Shields. Cassandra is ashamed of taking time to indulge in an idle pastime when there’s an apocalypse at hand, but she is clearly smitten with the stories, which she had started to read in an attempt to understand Varric better and, hopefully, see through his lies. The quest, Guilty Pleasures, allows the Inquisitor to follow up on Cassandra’s request to get Varric to complete the next chapter. 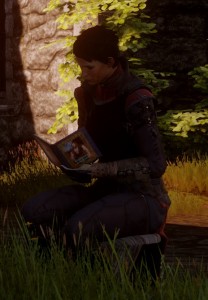 It’s a beautiful moment with Cassandra, who was, in her previous appearances with the Dragon Age franchise, a no-applesauce, by-the-book hardass who could as soon crash through a wall than go around it, if you let her. Her world has fallen apart in DAI, and she is struggling to keep both herself and the Inquisition together. There are many moments where she can express this to the Inquistor, with whom a very endearing friendship can be formed (as well as a romance for male characters).

Cassandra is mocked by a few people during this process for her choice of literature — a common reaction that readers of serial romances know well. But she defends her choice of reading material, saying: [paraphrased because my memory sucks] “It’s about passion, about fully pursuing an ideal with everything you have. What’s not to admire about that?”

Cassandra was a Seeker of Truth, and though the order has fallen, her passion for duty, truth, loyalty, and her beliefs remains. When thought of like that, what’s not to love about romance novels — and Princess Cassandra Allegra Portia Calogera Filomena Pentaghast herself.

With Orlais as an ally, more and more people seem to be showing up at Skyhold. Apparently, someone put up a notice on Facebook with the address? I don’t know. But I sure hope Corypheus doesn’t find that page.

Finally, after having more fun moments with all the companions, I pay a visit to my love interest, Solas. He and Lerenne head on up to her quarters where he praises her for dalishing so well. 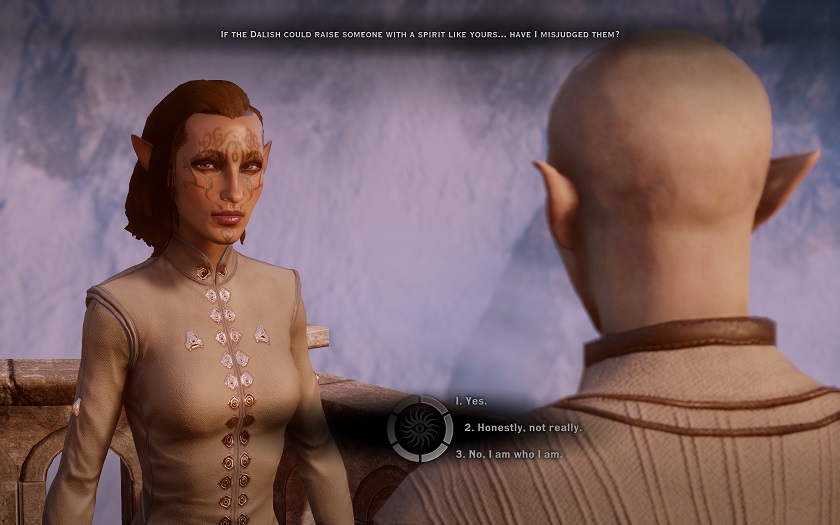 There’s another opportunity to make kissy face, but Solas pulls away, saying something about not wanting to hurt Lerenne and it’s better in the long run if this relationship doesn’t happen. Of course, I am having none of this. I want my pixel romance, dammit! But alas, Solas sticks to his guns and leaves Lerenne to her thoughts and a cold shower. I’m pretty sure her thoughts were, “Dammit, I knew I should have started a romance with Cullen.” Okay, those were my thoughts, but I’m roleplaying Lerenne as an elf that’s only here for the elves. Let the elven uplift continue!