I am on a mission to convert non-gamers to the wonderful world of gaming, and Telltale Games is helping me with my goals by offering interactive stories based on popular series. I’ve talked about their The Walking Dead and Fables games in the past. Now it’s time to get bloody with Game of Thrones. You don’t have to be an avid fan of the television series, but if you are, then you’ll recognize just about everything in this game, including actors lending their voices to your favourite characters. And you’ll recognize the opening scene of episode one, “Iron from Ice,” which takes place at the end of the television season three, outside of a certain wedding…. 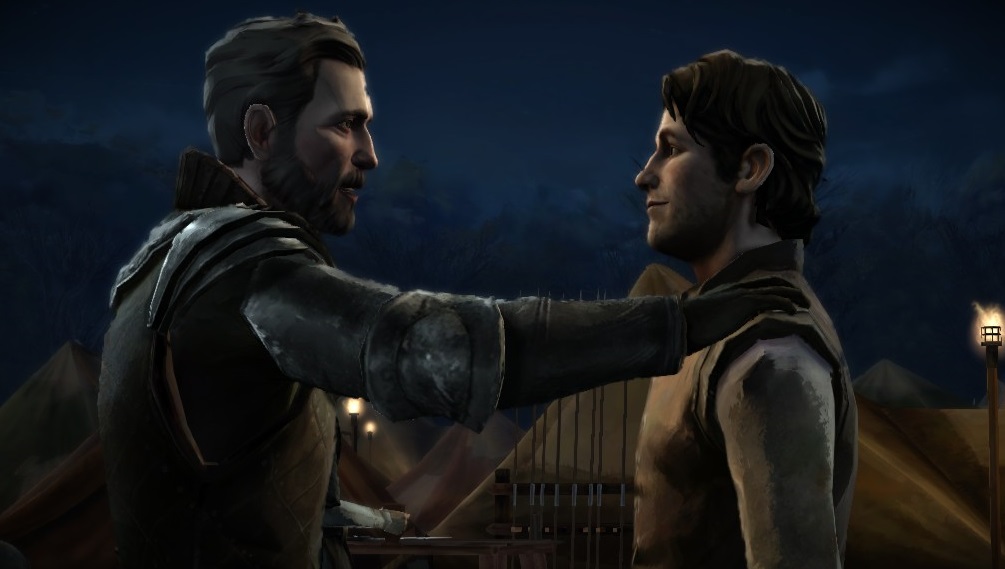 Don’t worry, lad. What could possibly go wrong at a wedding?

Just in case you had forgotten what Game of Thrones is all about, just keep in mind that everybody dies, and you’ll do just fine in this game.

Episode one introduces us to Gared Tuttle, squire to Lord Forrester. House Forrester is a lesser noble house sworn to House Glover, which, in turn, is sworn to the Starks. Their seat is Ironrath and their house crest is a great tree, symbolizing the ironwood they harvest and so finely craft. The Forresters proudly serve the King in the North, which is why they are all happily getting drunk outside the twin towers of the Freys’ lands. Which means your first few moments of the game are not going to go so well.

What more can I say?

While there is a lot of violence during this opening sequence, the actions required are fairly simple and the game instructs you accordingly, which is why I recommend this for gamers and non-gamers alike. It is forgiving of  casual and new gamers, and action sequences don’t happen too often. Instead, Telltale’s series focus on dialogue and, to a lesser extent, interacting with the environment to move the story forward. When interacting with other characters, players are often presented with the opportunity to respond with three or more dialogue options (or silence, if you so choose). During certain conversations, a time limit is imposed on your answer. This is one of my few nitpicks with the game so far, because the timer on the decisions seems to go much faster than I’m used to in Telltale games, leaving little time to select a response that suits how you wish to play your character. Are you aggressive? Clever? Passive? Or do you prefer to let your silence speak volumes? How you respond and the decisions you make will often be noted by other characters. 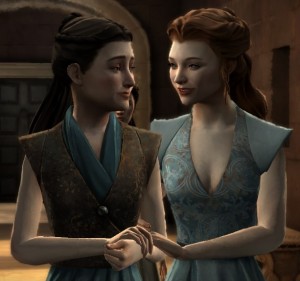 Following the events at the Twins, Gared’s struggles continue, but he manages to make it back to Ironrath, where game play soon switches to young Ethan Forrester, the new lord. Switching main characters in the middle of the game is unusual for these series, but this will happen again when the main character changes once more, this time to Mira, the trusted handmaiden of soon-to-be queen, Magaery Tyrell, at King’s Landing. With both of these characters, the player has to be sharp of mind and quick of wit to play politics, especially when they come face to face with Ramsey Snow, Lord Bolton’s sadistic bastard son, and Queen Regent Cersei Lannister. 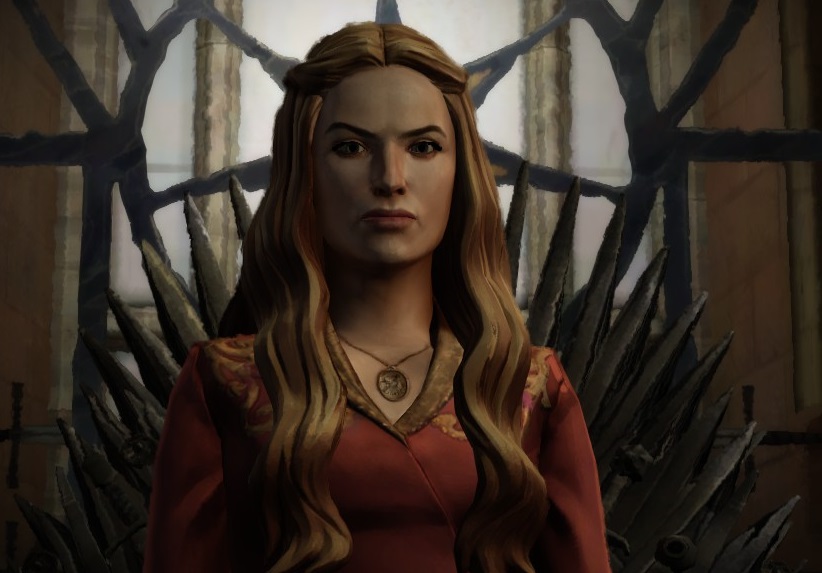 Cersei is not pleased.

Cersei is joined by her brother Tyrion in a scene that leads to my other minor complaint with the game. The game obviously works on the assumption that players are familiar with the television series at the very least, but it takes for granted that the player knows the other characters and likes or dislikes them accordingly. The dramatic irony is a bit too convenient when it comes to Mira’s interactions with the Lannister siblings, with the dialogue options working on the assumption that Mira is ready and willing to trust Tyrion, despite not having significant prior dealings with him.

Players can expect typical Game of Thrones intrigue and life or death situations based on their decisions in Iron from Ice– no pressure! Fortunately, some of the major decisions do allow you to take your time, but, as with everything Game of Thrones, what you think might be the best answer, may still turn around to bite you in the ass. Although established Game of Thrones fans already know what happens next in the grand scheme of things, the game still takes some surprising twists and turns that will ensure you’ll be back for the next episode.