PREVIOUSLY ON INQUISITION DIARIES: The Chantry continues to denounce the Inquisition and the so-called Herald of Andraste, but the Templar Order, led by Lord Seeker Lucius, has abandoned the Chantry. Lerenne opts to go after the mages, whom, she discovers, have been indentured to a Tevinter magister named Alexius. Something fishy is going on here…

Lerenne takes the bait and enters the Redcliffe Chantry to find a dashing mage fighting off demons pouring from yet another rift. Upon the closing of this breach, the mage introduces himself as Dorian Pavus. 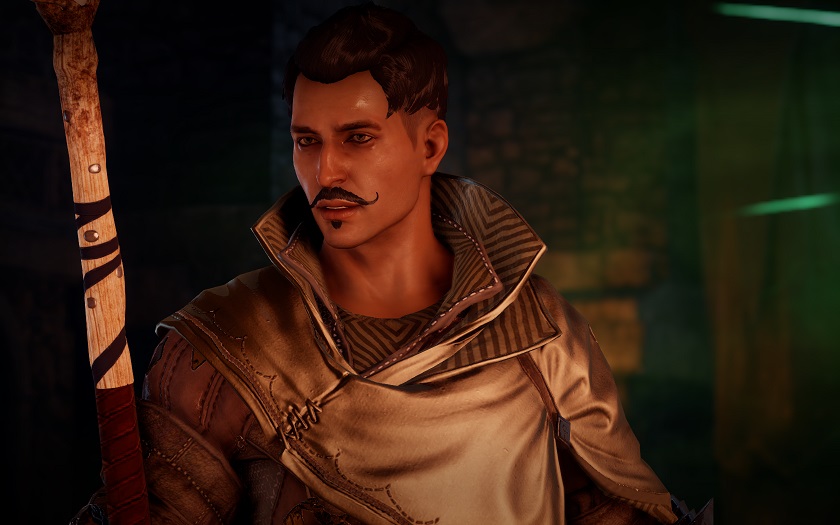 He is from the Tevinter Imperium and is a former mentee to Alexius, who informs you that the man must be stopped. In comes Felix, who confirms that his father has done a very, very bad thing.

Back at the war room table, Cullen, Cassandra, Leliana, and Josephine believe we’re out of luck with the mages, but Lerenne presses on until Leliana suggests a solution: her men can sneak in the back way, while Lerenne presents herself at the front door as bait. After all, it is the Herald and her mark that he wants. Enter Dorian, who walks into the room with a significant WAR ROOM, I AM IN YOU swagger and invites himself along. We shouldn’t be so easily trusting a Tevinter mage, but, you know, he’s pretty. 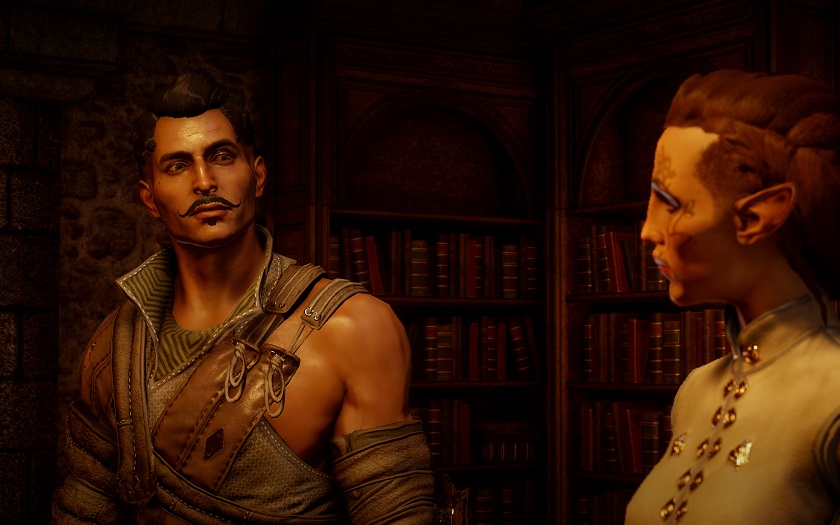 Grand Enchanter Fiona tries to voice her dissent, but Alexius and Lerenne get straight to business. Big people are talking now. Lerenne still needs the mages to help with the breach, but Alexius wants to know what he’ll get in return. There are several dialogue options here, but Lerenne goes with “Nothing,” at which point, Felix and Dorian enter and reveal that Lerenne knows about Alexius’ naughty behaviour. Alexius is part of a cult called the Venatori and reveals that he’s only doing this to save his son from the blight sickness that is killing him. He just needs to hand Lerenne over to the Elder One.

In the DA2 downloadable content (DLC), “Legacy,” the main character, Hawke, is lured into a trap where it is revealed that the Grey Wardens (soldiers whose sole purpose is to fight darkspawn and defeat the archdemon that brings on the Blight, as seen in DAO) have imprisoned a creature claiming to be a Tevinter mage, but looks a whole lot like a darkspawn. His words and his existence more or less confirm that the Tevinter magisters, in their arrogance, attempted to reach the Golden City, and instead ended up creating the Blights that ravage the world. Think of this as a Tower of Babel story with results far worse than muddled languages.

Hawke and her companions believed they had killed Corypheus, but my suspicion is that this is not the case…

Leliana arrives, taking out Alexius’ guards. It seems we have won the day, but alas, Alexius has a shiny green amulet that turns the tables upside down, sending Lerenne and Dorian forward in time. Not really sure how Dorian figures this out, but we’ll just have to take him at his word, since he has some inkling of what his master has been working on. But time travel? Really? A dangerous story element to introduce if you don’t know how to manage timey whimey things. 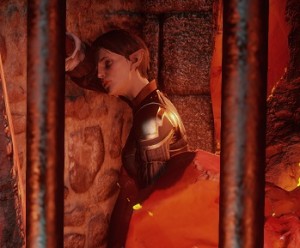 Red lyrium is all over the place and after some hunting around, Lerenne and Dorian find The Iron Bull and Vivienne, who are glowing under the effects of the lyrium. They also find Fiona, who actually has lyrium growing out of her body. They now need to find Leliana.

This is where reading those codex entries is a bit more important. It doesn’t make or break the game if you ignore them, but if you do read them, you’ll learn that (A) Alexius – fearful of the Elder One’s retaliation for his failure to capture the Herald – has been holed up in his room and will only accept visitation if all of his henchmen come at once, and with useful information, and (B) he has been experimenting on people by giving them the blight sickness in hopes of finding a cure for his son, Felix. Leliana seems to be the only patient that has survived thus far.

And she’s a bit bitter about it. 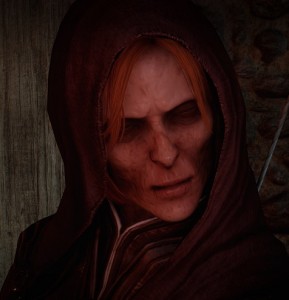 Leliana has no time for talk, other than to inform us that Empress Celene of Orlais was assassinated and the world has gone to shit thanks to the Elder One and we need to fix this so find the five damn red lyrium shards from Alexius’ minions and get us the hell out of here.

A WTF moment occurs when you enter a room and hear a masculine voice scream, but nothing is there. A dialogue wheel pops up allowing you to respond. Only, there’s no reason for anyone but Leliana to know what may have gone on in this room over a decade ago, yet Iron Bull then says something about the boy resisting the demon to the end. Backstory: in DAO, the player saves a child (or has him killed) from demon possession in this very room – but unless Lerenne was channelling DAO’s Warden, the moment makes zero sense. See? This is why we don’t mess with time.

Inevitable showdown with Alexius occurs, and, upon his defeat, Dorian obtains the amulet that can send him and Lerenne back in time – but not before the demon horde attacks. Iron Bull and Vivienne head out to hold the line, and Leliana does badass Leliana things to buy you time. So that you can go back in time. Sigh. 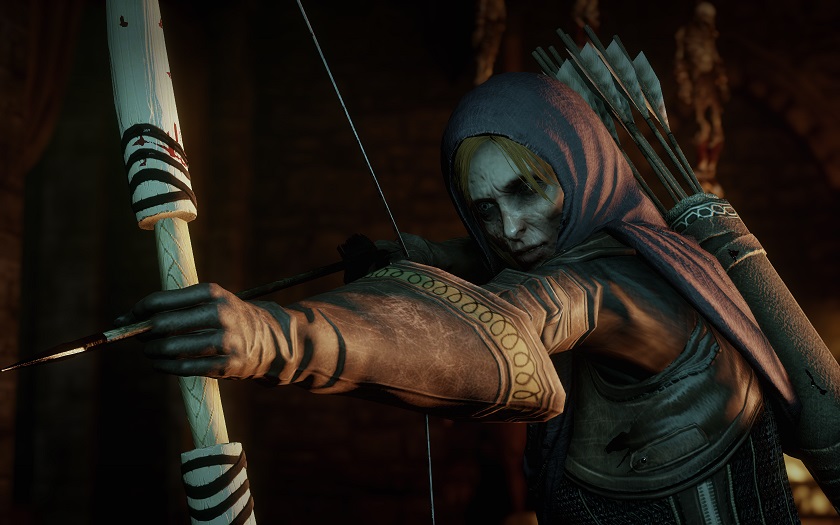 “You have as much time as I have arrows” 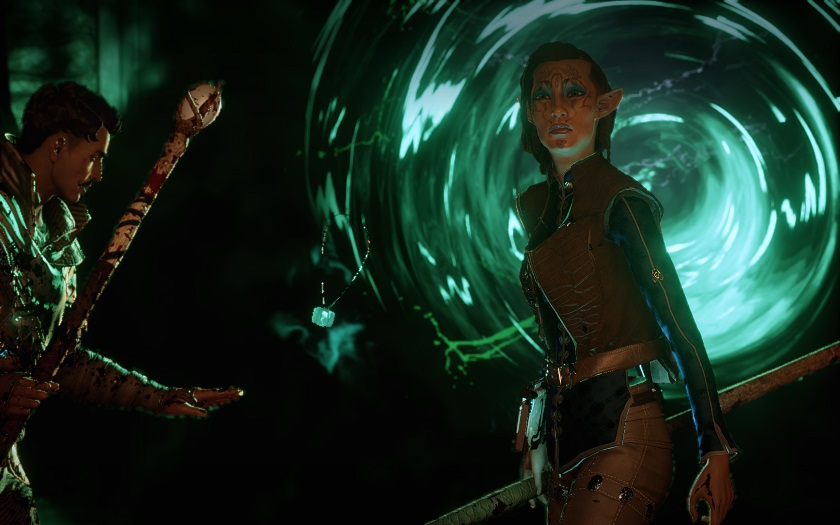 Let’s not do the timewarp again. 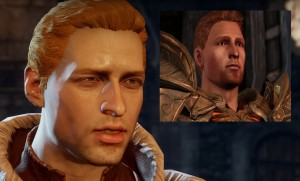 Alistair before and after

Fortunately, it all works out and Alexius is taken into custody. What of Fiona and the mages? Before that can be addressed, in walks the King of Ferelden, who admonishes Fiona for her folly. It is a bittersweet moment between mother and son, especially because he doesn’t know that’s who she is. Unfortunately, for me, it’s a crappy moment because why the hell does Alistair look like he’s made of really bad plastic? This isn’t the man I fall hopelessly for every time I play DAO and swear I’m not going to fall for …

With nowhere left to go, the mages are now bound to the Inquisition, but Lerenne accepts them as allies, not prisoners, reasoning that they would serve better as such. Some of her companions disapprove, but screw them, I’m in charge.

Time to close that breach!

In one of the most anti-climactic moments ever, Solas and Cassandra conduct the mages to support Lerenne as she closes the massive rift at the Temple of Sacred Ashes. Just like that. Then we all head back to Haven for a party!

Next: The Party Don’t Start Till He Walks In