I’m obsessed with Threes, and I’m sharing my obsession with you. Threes is a number matching game for smartphones. The game is similar to 2048, but better. Unlike 2048’s late 60s era harvest gold minimalism, Threes is stinking cute, and features fun design elements throughout that keep you interested. The game costs about two bucks, but then never asks for money again. You get unlimited turns and can play all day without having to pony up for another “life,” which I much prefer over the freemium model that constantly begs for money.

Game play in Threes is, like most great puzzle games, easy to learn but hard to master.

A four-by-four grid slowly fills up with numbered tiles that you slide around the grid. You can move up, down, left, or right, and every time you move a new tile is released. Tiles with ones and twos match to create threes. From three up, you slide tiles with the same number onto each other to create a new tile. Two three tiles become a six, two sixes a twelve, and so on. Each time you make a match you also free up a square so you can make more moves. A box near the top gives a hint about what type of tile is coming next. Your turn is over when the grid is filled with tiles and you can’t move. Theoretically, the game could go on forever.

This is simple enough, but it’s also fun! Volmer and Wohlwend gave each number its own voice and personality. As they match, the tiles say “Hi!” or “All right!” to each other like old pals, and it’s fun to create newer, higher numbers to see how they’ll act. Will it have an eye patch? Will it have fangs? As I said above, this is all stinking cute, and cute goes a long way in my world. Then there’s the soundtrack: Jimmy Hinson (@BigGiantCircles) scored it, and the result is a jazzy, jaunty tune that you’ll find yourself humming all day (do you like the music in Two Dots? You’ll love Threes!). The tune is so popular that you can buy it as a single on iTunes. 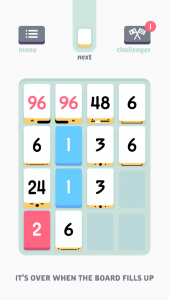 Don’t worry if your iOS device is elderly! Threes was developed to be light and work well on older devices. While my iPhone is new, I work in a building with spotty wifi. While other apps won’t even load in a dead spot (I’m looking at you, Bejeweled Blitz!!), Threes does fine. Threes also won’t kill your battery, and doesn’t seem to draw a lot of data. Integration with Game Center isn’t mandatory, and that seems to be the only time the app calls home, so if you’re worried about data usage I don’t think that will be an issue.

If you like puzzle games, cute interfaces, and mild bouts of obsession, join me in a game of Threes!

*Editor’s Note: Now through December 7th 100% of proceeds from the sale of Threes through the Apple Store goes to [RED]‘s fight against AIDS.*