PREVIOUSLY ON INQUISITION DIARIES: Lerenne of the dalish elf clan Lavellan has been called upon to form an Inquisition to discover who or what is behind the breach that threatens to destroy the world. Her connection to said breach has some calling her the Herald of Andraste, while others believe her to be Thedas’ undoing. 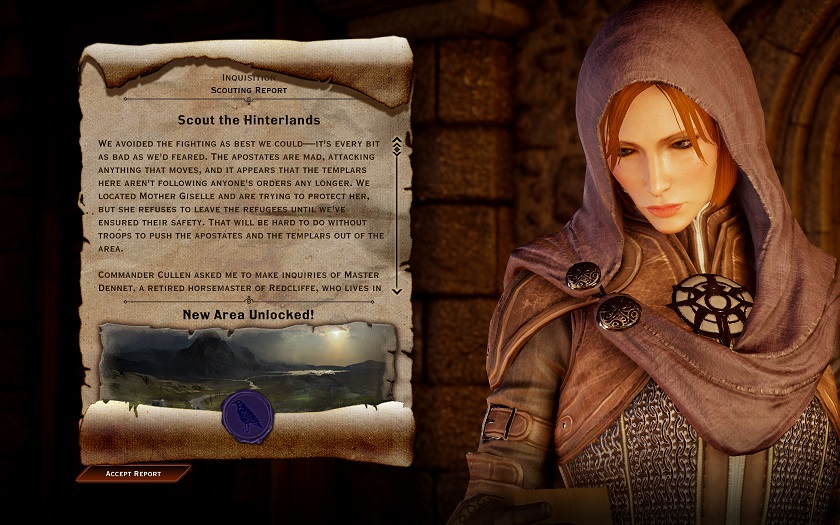 The Inquisition needs to rally its forces. Mother Giselle seems to be the go to person for this and she’s hanging out in the Hinterlands with refugees fleeing from the mage/templar struggles that are raging on there. This is the first introduction to the war room map, as well as the first opportunity to head out into the open world of the game. 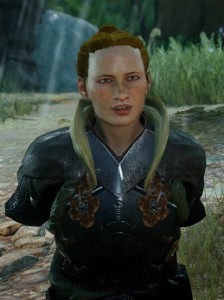 At the first camp in the Hinterlands, I met Harding, a hard working dwarf scout. She knows her stuff and is not afraid to dig in and get her hands dirty, no matter the risk. She is devoted to the Inquisition and an instant favourite NPC for me. I only wish that she was a playable companion, but alas, she has more important scouting tasks to attend to.

Little did I know that stepping into the Hinterlands would be the end of life as I know it. As in, I knew I would be kissing my children goodbye and handing my soul over to DAI for a long, long time, but I didn’t know the majority of it would be spent on the Hinterlands map. I can take some consolation in the fact that I am not alone in this. Many of my friends have spent countless hours exploring the zone: collecting crafting materials, stargazing, fulfilling requisitions, fighting mages, templars, and demons, closing rifts, racing horses, collecting shards…. And we’re still not done.

Dragon Age players, don’t forget to explore other areas than the Hinterlands. It’s a wide and wonderful world! #DAI pic.twitter.com/2RoIGR7Bgv

If you’ve played Skyrim, you have an inkling of what this is like. Skyrim’s open map meant a lot of wandering around and – “Oh look, a cave!” I spent so much time exploring in Skyrim, that I forgot about the story (which wasn’t all that interesting in the first place). With DAI, the exploration of the map actually has a point, as in, everything you do goes directly toward helping the Inquisition in some way. Perhaps helping a refugee earns you a new agent to help in your affairs, completing a quest earns supplies. And everything earns influence for the Inquisition, spreading the word across the continent of Thedas that you just might be the good guys after all. 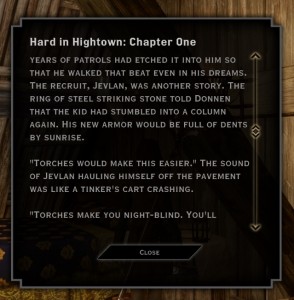 Dragon Age has significant lore behind and within it, and you will get a lot of this in your travels. The codex is constantly being updated with items found, people or events mentioned in conversation, bestiary, or documents and books to read – even songs to listen to. The historical and cultural references weave the mythology of Thedas, and I am always intrigued and/or pleased to find references to materials from the tie-in stories. My gameplay would be that much longer if I stopped to read it all, but I can always go back and review the lore within the many sections of the codex. One thing I am reading are the chapters of Varric’s book, “Hard in Hightown.”

But the Hinterlands isn’t all just fun and games and mindless wandering. 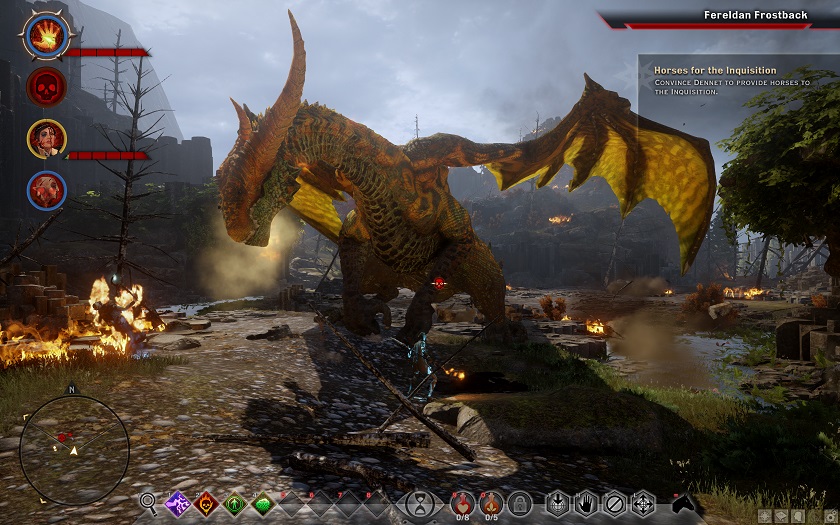 It’s dragons, too. This battle did not go so well.

Lerenne is here for a reason: to take care of the refugees, fight the templars and mages, and speak with Mother Giselle. Talking to this high ranking woman of the Chantry is one of the first instances where DAI instantly improves upon DA2. In the latter, the mage/templar war was fairly black and white. Or rather, black and black. Mages not kept within the Circle towers were dangerous and likely to turn into abominations at any moment due to their constant cavorting with demons. Meanwhile, templars were jerks who mistreated their charges, and opted for kill first, ask questions later procedures. Certainly there would be bad apples on both sides, but the depiction in DA2 was ridiculous. In DAI, Mother Giselle does not believe in the oppression of mages — nor did the Divine herself. There is opportunity to speak with several other mages about their position in the war, and some of them have very poignant things to say, particularly the mages who oppose the mage rebellion. Mother Giselle is a solid voice of reason and excellent advice, and if I have my way, I will be casting my vote for her as the next Divine.  Mother Giselle advises Lerenne to go to Val Royeaux, where the Chantry is presently denouncing the Inquisition and the heretic leading it. Their power is a unified voice, she says, you need only spread doubt. 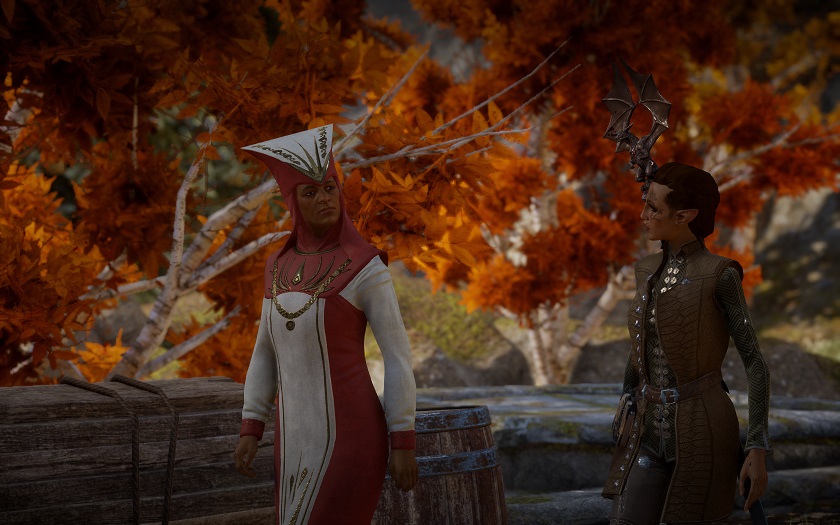 In order to go to Val Royeaux, I need power points, which I gain by completing tasks in the areas on the map. I made enough to take me to Val Royeaux, but then decided to check out the war room features of the game. Various operations appear on the world map between the nations of Ferelden and Orlais, and I can instruct either the ambassador, Josephine, the spymaster, Leliana, or the commander, Cullen, to deal with any given situation. Each will handle them in their own unique ways, but one might be more suited than the others for a particular mission. 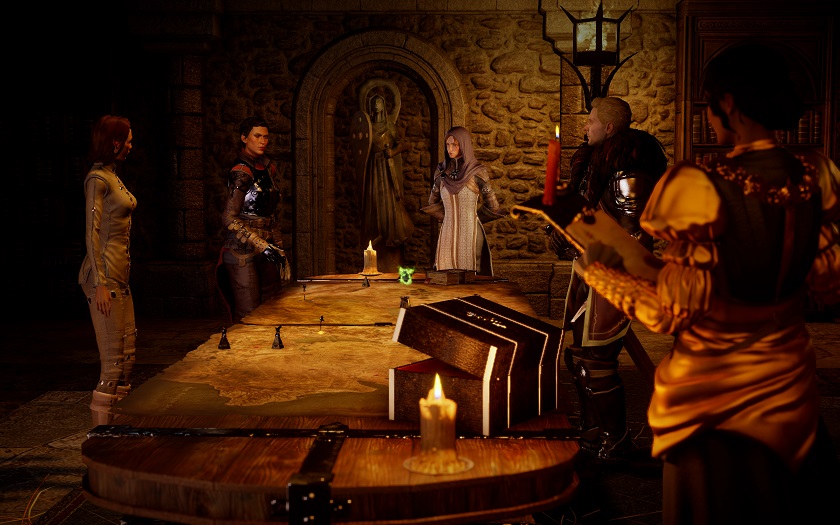 The problem is, I got a bit carried away with my war tabling and accidentally spent too many power points, meaning I no longer had enough to go to Val Royeaux. Oh well, I guess I better head back to the Hinterlands to earn some more…

Up next: We’re Off to See the Chantry