Annalise is a tabletop role-playing game that focuses on a group of people who have caught the attention of a vampire. This doesn’t have to be a literal blood-sucking Dracula impersonator, as the game is as much about creating a mood and competing with your friends until the final showdown between you and the vampire. 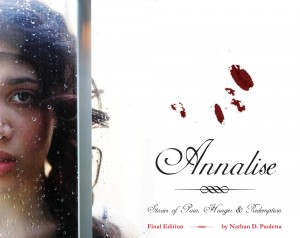 I take off the blood-stained crucifix and leave it on his body.

I finally found the one who loves me.

There are four phases of play: Discovering Characters, Laying the Foundations, The Confrontation, and The Aftermath. During each phase, players take turn narrating Scenes where they describe what their character does and says, and the other players chip in with ideas and little details, speak for non-player characters (NPCs), or narrate the overall action. This is a GMless game, where responsibility for the narration and action is equally shared by all players, although there is the formal role of Scene Guide. The player whose turn it is selects another player to be the Scene Guide for them, and that person does the narrating for that Scene, and then it switches on the next Scene. Each Scene has Moments, which are parts where choices are made that affect the story.

All players claim elements as theirs, which is where the tokens and paper come into play. During the Scenes you can call dibs on a part of the fiction for your own. So if someone mentions a bloody handkerchief and that strikes your fancy, you write “bloody handkerchief” on a slip of paper and put tokens on it. This element is now yours, and you can spend those tokens to introduce it into any Scene, while no one else can.

You then play to find out more about your character, the other characters, and the Vampire. Each character has two main traits: Vulnerability and Secret. The Vulnerability is what attracts the Vampire to your character. The Secret is something you’re unwilling or unable to share with anyone, and is generated randomly. As you play through the Discovering Characters phase, you find out how everyone is vulnerable, establish what relationship you have with the others, and figure out the setting. You then assign tokens to all of your traits, and move on to the next phase.

Laying the Foundation is a series of more focused Scenes where you begin to hint at your character’s Secret and the presence of the Vampire starts to intrude more.  This is when you get into the nitty gritty of role-playing and flesh out your character. This is also where you’ll begin to mess with other characters. You can spend your tokens to change their dice rolls or add your creepy claimed elements. This is a subtly competitive game, and the closer you push the other characters towards the vampire, the more motivation they have to drag you with them. Once you’re all ready to face the vampire, it’s time for the next phase.

The beginning of the Confrontation phase lets you rearrange your tokens so that you can use stronger elements. Then you play through Scenes with a Scene Guide as before, but this time building towards a climactic confrontation. There’s a lot of emphasis on how your character has changed throughout the game, and their Secret is revealed, if it hasn’t been earlier in play. This is a game focused on the internal. You may end up giving into the vampire, while other players may attempt to destroy or run from them instead.

Finally, you have the Aftermath. Each player has a Scene where they wrap up loose ends and describe how their life changed after the vampire. This part is a lot less mechanics-heavy than the first three phases, but is a nice way to get closure.

The game creator, Nathan, was kind enough to meet me and a few friends at a local game store and run it for us. I was a grad student studying folklore at some Miskatonic U knock-off, while my friends were a sleazy janitor and a highly eccentric librarian obsessed with the occult. During character creation we claimed things like footsteps, stained glass, and a flickering light bulb. There were drug deals, mysteriously dead families, and a mist rising in the quad. We were playing in a brightly lit store, but it was still pretty creepy. The rules are on the complex side (my summary skipped a few key steps for brevity) and it wasn’t clear at first that you should be screwing people over with your tokens. We did have a moment of great play at the end of the session when the stained glass windows coalesced into a glowing being that claimed to be an angel.

If you’re new to role- playing, think of this as a short story arc like a season from a TV show or a movie. You want to hit the big dramatic notes that show what makes up your character and shows what makes them tick. There are several ready-to-play scenarios included in case you want help learning the game.

If you’re a role- playing veteran, read over the rules several times. There’s a few tricky bits, but once you have the mechanics down, the rest is a moody but regular story game.

ndp design or ask for it at your local game store.