Get yourself a glass of something fine. Get a blanket. Draw your chair up close to the computer screen. If you’re brave, you can turn off the light.

Also, you need to become six years old. Can you do that? In your mind?

When I was wee, my mother, an ex-programmer, brought me to the big beige monitor and got an enormous, thin square with a circle on it out of a locked, half-transparent filing pod. She fed it into a large chunk of plastic and I played, for the first time, Granny’s Garden.

Granny’s Garden was developed by Mike Matson for 4mation, released in 1983 (four years before I was born), and it’s remembered as an educational game. Why? I’d love to know. It’s available on multiple platforms, Amstrad CPC, Macintosh,BBC Micro,Commodore 64,Microsoft Windows, Linux, ZX Spectrum, and, in fact, as an app. Play it.

There was something wrong with the version we had. The screen of our computer was incompatible with the first real puzzle of the game and didn’t show enough colours to allow me to identify the word “log” hidden in the bricks of the woodsman’s cottage. I thought I’d never got further than that, but upon watching the play through above I realised that I recognised the differently coloured brooms and the mushroom and the snail. I suppose mum must have helped me, or I guessed right somehow. It doesn’t really matter. What I do know is that I certainly never completed the game alone, that I was allowed to play it rarely, and that playing it felt tremendous. It’s a weird game. It’s Grimms-level weird. A child disguised as a broomstick, invisible upon first inspection, and identifiable only because it is green? A snail whose shell you are invited to ride within? It’s wild, log-cabin imagery on par with the whirling eyes of the tinder-box dogs. That’s a power story for me.

Regularly, wrong choices in Granny’s Garden greet you with the hideous face of the evil witch (the Granny of the title? Who knows?). Her distended beak shows pegish teeth, her yellow eye stares squarely at you; she’s frightening, bizarre, obscene. What does she do to you when she catches you? Eats you? 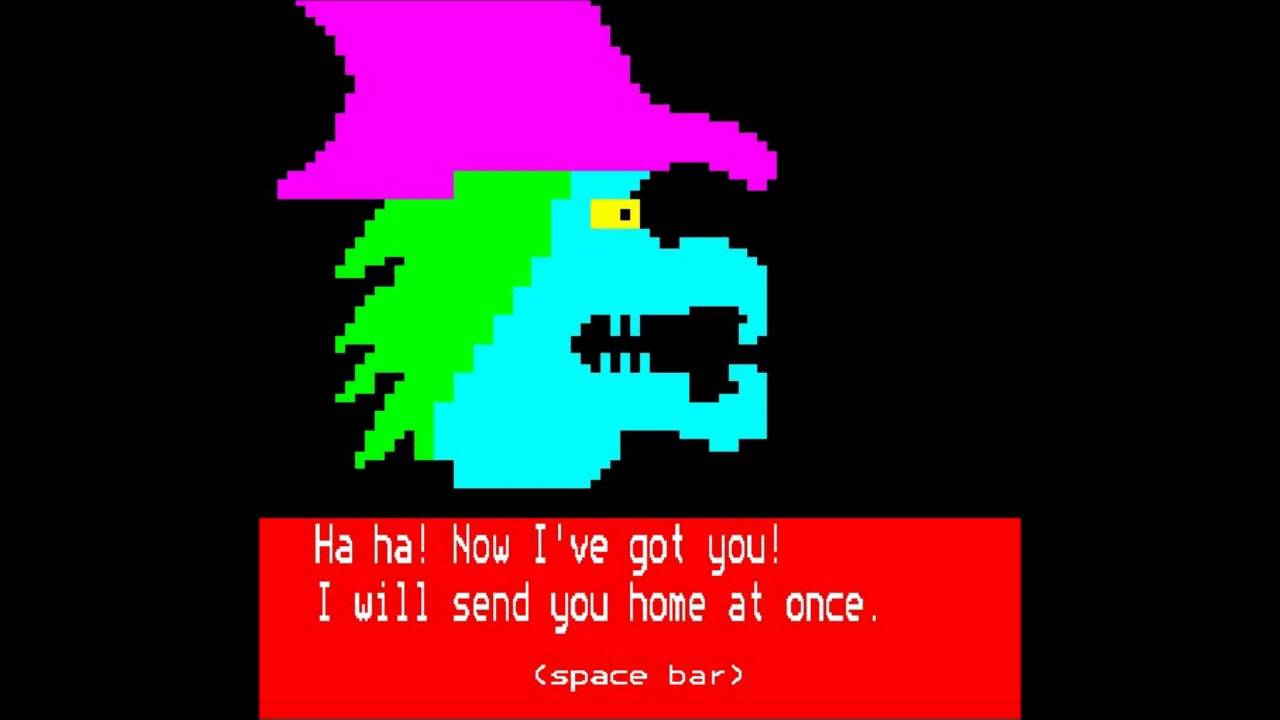 She sends you home. Is that scary? Somehow.

I was a shy child, and I took horror seriously. Earnest about fiction, you know? Granny’s Garden was affecting in its quietness. It’s folktale-ish geographical mystery, the feeling of being chased, slowly. Similar to the zombie fiction of the old school, but the focus on gathering, saving, figuring out put me in a far better place than upsetting “run for your life” stories. It’s a similar atmosphere, actually, to the eye of the apocalypse setting of my beloved Megaten: Nocturne.

As I said, I didn’t get to play it much. My parents don’t quite comprehend what video games are for, or how they’re positive. I suspect that if Granny’s Garden hadn’t been labelled as educational, I wouldn’t have been introduced to it at all. They bought me a Playstation and my sister was a regular upgrader once she convinced them the GameBoy Colour was a good investment, but they never really came around to why anybody would want to press buttons and look at a screen when they could be drawing a picture or building a wall or moving their body.

I don’t game much now. Granny’s Garden ensured that I think of video games as long-term mood investments. I played GG maybe six times in five years, and it was WORTH IT. So these days, six months of thinking I could go for some Kirby’s Dream Course is perfectly satisfactory. I can play Nocturne maybe once a year, for a couple of hours, and feel aesthetically satisfied. Proper enriched! Watching somebody play a game is pretty much as good as playing it, in my book. Maybe because Granny’s Garden is a matter of occasional keyboard inputs instead of the x button x button x button x button JUMP, JUMP, FUUUCK stuff that was my norm later on?

Check it out, one of the lost children you’re searching for even has my name. Almost. 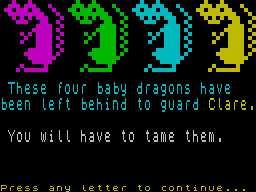