Rachel Stevens is playing XCOM: Enemy Unknown/Enemy Within on PC

XCOM: Enemy Within is the followup to 2012’s critically acclaimed remake of UFO Defense, Enemy Unknown. While Enemy Unknown was a standalone game, and Enemy Within is for consoles and the recently released mobile port as well. I’m playing it on PC, where it serves as an expansion with toggle-able options. The tactical game has you directing a squad of 4-6 soldiers at a time against an alien invasion on a 3D rendered, isometric grid. You’re rewarded for being cautious: the better cover you’re in, and the better sight you have on the target, the more likely you are to hit the alien target and the less likely you are to hit yourself. The expansion does reward some risk: the new resource MELD can only be recovered from the battlefield if you move quickly, even if it means exposing yourself to alien gunfire.

As the game progresses, your squad becomes better equipped through research and the careful use of resources, and gains more abilities through experience, making them less likely to die and more likely to bring the retribution of Earth down on the aliens’ psychic heads. Heartily recommended.

Wendy B is playing Kingdoms of  Amalur: Reckoning, Saints Row IV, and ArcheAge

This is a fantasy RPG that boasts creative input from bestselling author R.A. Salvatore and Spawn creator Todd McFarlane. I played the demo for this a long time ago and have been meaning to get serious about it. I’m not far enough in to speak about the story or the world itself, but I am enjoying the action. I’m playing a rogue, which is a class I’ve recently gotten into. I like the opportunity to toss in a little magic here and there and am looking forward to seeing what interesting things I can do with my new character, Aidith. 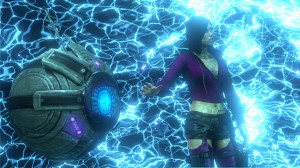 I jumped on the Saints Row bandwagon when things got crazy with the third installment. The series went from a semi-series gang warfare story, to urban violence satire when the Saints sold out for celebrity status. My Sad Charlie took over as the Boss of the Saints, and in the fourth game, shares the White House with Vice President Keith David. Yes, I bought this game almost entirely for Keith David and I’m not even sorry. In Saints Row IV, the gang’s all here, including the infamous Johnny Gat, after an alien mastermind takes over the earth and traps everyone in a virtual reality prison. The down side? Alien invasion and a comparatively limited wardrobe. The plus side? Phenomenal cosmic powers. 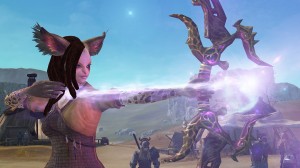 The latest addition to the vast collection of massive multiplayer online roleplaying games, ArcheAge features a ponderous story about stuff and things that I got bored with very quickly during the beta a few months back. Thank goodness for peer pressure! My friends and I participated in Extra Life and wanted to spend some of that time playing together. So we’ve all created characters and jumped in feet first. I still find the story to be quite ponderous and have skipped through the pedantic cutscenes, but after reaching level ten, things have gotten interesting with the various class combinations. My elf is now a Boneweaver, and my bow and arrow wielding firran will soon see what adding Battlerage and Sorcery will do for her. 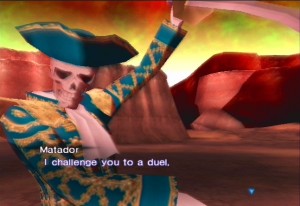 I’ve been “playing” Megaten: Nocturne for about ten hundred years (OK. Like… six. Seven?). I don’t literally play it very often, because video games make me feel anxious and very defensive about timekeeping, but in my mind I remain within the process of enjoying this game. It’s a pure aesthetic enjoyment — visuals, concepts, motifs… the world ends and a bunch of pals have the power to re/make the future of reality, based on their philosophical values. The third-person protagonist wears these long shorts that puzzle me pleasingly (who wears long shorts? That’s almost a paradox) and glows with demonic tron lines. The demons are wonderfully, creatively designed and the human characters all have their own sense of style or fashion; I’m fixated upon Orlando Bloom’s leather fish jacket.

This game doesn’t force you to go against your own principles, but it makes it so easy to say “it’s just a game”. I don’t think it’s right to fuse beings to create more powerful pokemon, but… it didn’t take me too long to sit on that, in the name of greater power. But I feel guilty. And I’m shifty every time I take up the controller again.

Sarah is in the Dungeon 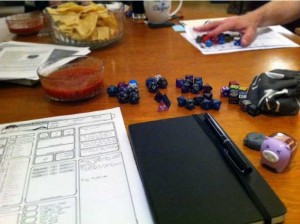 Dungeons and Dragons 5e
Wizards of the Coast
2014
Table with pen, paper, and funny-looking dice

I’m aware I may have a problem.

A past Saturday was our bi-weekly face-to-face game group, and was our fourth session of Dungeons & Dragons 5e set in Hyperboria. During the last session my barbarian, Dree, was slain in battle, so this time I introduced Ildra Alvitr, Viking Skald. She’s a tall red-headed bard with a bone harp and a love of the ladies. Our group also includes V, the thief who lurks in shadows, and TarTok, the pointy-toothed warlock who worships a wendigo god. We managed to fight our way through a temple and defeat a rather nasty snake cult, plus we raised Dree from the dead. So I got to play two characters at once who can’t communicate with each other. Did I mention Dree is a vhurmis (beast-man, kind of like Chewbacca) and only her close companions V and TarTok can decipher her growled mutterings? Yeah. 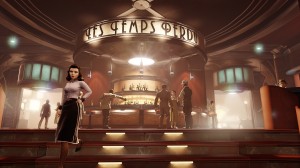 The Bioshocks have been some of my favorite games. They are scary works of art. Bioshock is the whole package, every time. Now I’m finally getting around to playing the expansion for Bioshock Infinite and it feels like going home in some ways. The two main characters of Infinite are now in Rapture, the setting of the first Bioshock, and it is as good as ever. I have recently convinced an old roommate of mine to pick up Bioshock and I would encourage other players to do the same. They are older games now and are pretty affordable on Steam and in stores.