The gaming industry has expanded to include a wide variety of games well beyond the PC and console titles that have dominated the industry for so long. Mobile applications and social media games are now housed under the same umbrella as games like Call of Duty and Dragon Age, but some of the more elitist gamers don’t like that the industry statistics are being muddied by these interlopers. Worse, people are daring to call themselves gamers just because they have reached level 400 in Candy Crush. 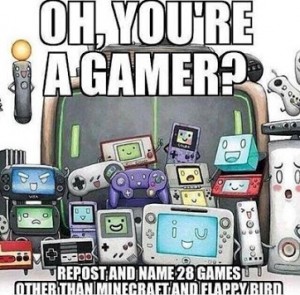 This meme recently visited my social circles, demanding that people prove their gaming worth by naming 28 games other than Flappy Bird or Minecraft. Because apparently, gaming is members only, and if you can’t provide the appropriate credentials, you’re not allowed in the club.

Everyone’s welcome in the gaming club, as far as I’m concerned, so I invite you to join me on Twitter on Friday, November 7 at 7:30 PM EST to chat about the video games – of any kind – that mean something you. Met your significant other in World of Warcraft? Tell us about it! Does Angry Birds help relieve stress after a hard day at the office? What was the first game you ever played? What game do you think everyone should play? #WWACgamers want to know!