That’s right. Anita Sarkeesian appeared on last night’s episode of The Colbert Report. The gaming industry scandal has already made it to the mainstream media, but now that Stephen Colbert has his fingers on it, the gloves are off!

If you’re familiar with the show’s titular host, you’ll know that he’s a loud and proud geek whose interests expand, unsurprisingly, to gaming.

If you’re not familiar with Stephen Colbert, here’s something you should know: He does not tolerate fools lightly. But he does enjoy pretending to be them. He plays a tongue-firmly-in-cheek devil’s advocate as he expresses their points of view, thereby revealing just how ignorant those points can be.

After Colbert’s usual opening montage that spelled out the GamerGate basics, he introduced Sarkeesian as the woman “leading the charge” against the “traditional gamer lifestyle,” and pulled no punches in his opening salvo:

“You and the other FemiNazis in the gamer world are coming for our balls to snip them off and put them into a little felt purse and take them away so we have to play your non-violent games.”

Sarkeesian failed to keep a straight face under such a brutal attack, but quickly recovered, countering with the explanation that, in its current state, the gaming industry tends to reinforce the cultural myth that women are merely sexual objects and playthings. 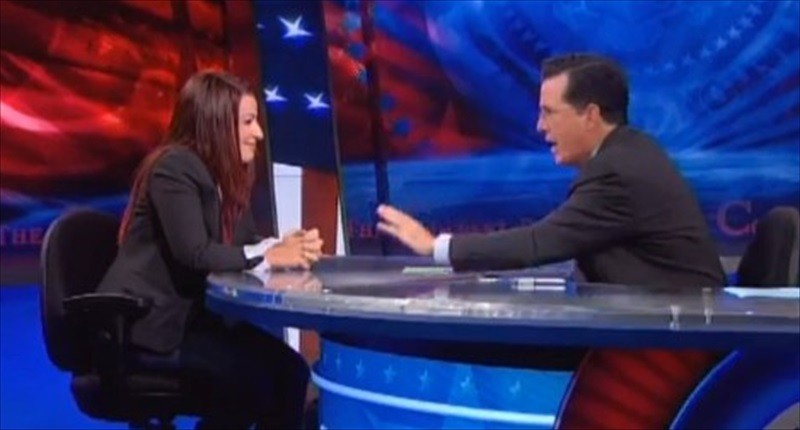 But we only want to rescue the princess, Colbert cried, to which Sarkeesian hit back hard with “maybe the princess should save herself.”

Colbert demanded examples of games that epitomized this male fantasy that Sarkeesian criticizes, but Sarkeesian refused to take the bait (save for a mention of Grand Theft Auto), opting instead to focus on the industry as a whole and how the tropes and myths are harmful to the gaming culture, and to women in general — particularly those who speak out against these issues, or work within the industry.

Their discussion touched on the recent Utah State talk that was cancelled after the university received a threat of gun violence if Sarkeesian’s planned talk was allowed to proceed.  Colbert asked why female game journalists, developers and critics are being terrorized for expressing their opinion or daring to be involved in the industry at all. Sarkeesian explained that women are being viewed as a threat to gaming culture because “we are asking for games to be more inclusive.”

Colbert didn’t buy this need for women to be acknowledged as people in the games he wants to play in the dark seclusion of his basement. But he did concede a little bit. “Why not have separate but equal games?” he suggested.

Sarkeesian noted that the gaming industry has changed significantly in the last little while and we are seeing an influx of different kinds of games, such as mobile apps — all of which challenge the status quo and threaten the “boys club” that has existed for far too long. Yet, she noted, women like her have been gaming for a long time. Female gamers are not a new phenomenon.

GamerGate’s claim that it is actually about “ethics in journalism” was raised, where Colbert asked about the supposed collusion between female game designers and game journalists. The irony-o-meter ran high when he pointed out that we should also consider ethics in Hollywood journalism. “What if we couldn’t trust TMZ???” he lamented.

But then Colbert took things off track and asked the all important question:

“Do you believe women should have equal rights to men?” Sarkeesian asked.

“Great, then you’re a feminist.”

And with that, Colbert and Sarkeesian buried the hatchet, shaking hands before a cheering audience.