Murderous Ghosts is a tabletop role-playing game that allows you and a friend to scare the living daylights out of each other. One of you pretends to be an urban explorer who has arrived in the basement of a building, while the other pretends to be a murderous ghost (or ghosts) just waiting to be discovered. It’s super creepy fun, perfect for Halloween! 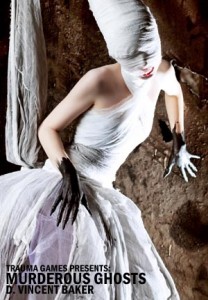 There are two parts to this game, one for the Master of Ceremonies (MC) and one for the Player. The MC controls the ghosts and environment, while the Player is responsible for what their character, an urban explorer, does and says. They take turns describing the action. What they can do is determined by the deck of cards and the entries in the books.

Each entry has a number. The MC’s book is all odd, while your (the Player’s) book has all even numbers. After the MC reads the first entry aloud and describes the space you’re in, she draws a card. You then respond with your first entry, numbered 2, in which you describe your character and ask the MC some questions about what you see. After making a choice and turning to the entry indicated, you draw a card. The numbers drawn tell you if the best possible thing happens, the middling thing happens, or the worst possible thing happens. You then go back and forth, with the MC telling you about the ghosts that show up and you describing the ways in which the explorer tries to escape or help the ghosts. The MC’s cards tell you how close you are to finding an escape route. Your cards add up to describe how good (or bad) things go for you. It ends when you flip to an entry in the back.

At all times, the Player can end the game if she gets too scared or uncomfortable.

Since I am a horror movie fiend, I loved this game. I played it with my partner, who has endured enough of my arm-clutching in movie theaters to know what exactly scares me. My explorer, Autumn, found a factory basement with damp walls and standing pools of fetid water. In order to move forward, she had to crawl through a crumbling hole in a brick wall into pitch darkness.

Autumn came face to face with a ghost. She had long black hair that covered her face. The ghost didn’t move, but Autumn thought she was looking at her. It was hard to tell.

I mean, my partner and I are playing this in at our dining room table and I suddenly felt an urge to peek behind me. I grew more and more physically uncomfortable as Autumn tried desperately to find a way out of this series of connected basements and sub basements.

I knew Autumn was in trouble when she saw the man in the apron.

She ended up in a room with a furnace with the man’s footsteps ringing out in the darkness, growing closer. Autumn managed to find a door and open it, feeling such relief at finally escaping the man in the apron.

Yeah, my character died. That last room was a closet full of the decaying bodies of the man in the apron’s victims, and there was no way out. We didn’t narrate her death, but instead let it fade to black with her realization of the situation. It was pretty intense, but still fun.

If you’re new to role-playing, think of this as talking out a story with a friend. Use the tropes you know from horror movies, or what actions you always wish they would take. Put yourself in your character’s head and try to figure out what they would do.

If you’re a role-playing veteran, and haven’t played a lot of story games, the open-endedness of the scene might throw you off. Use the same techniques as the directors of your favorite scary movies use to describe the way the factory looks or the way the ghosts act. Pay attention to the Player. They’ll tell you what scares them.

Night Sky Games or look for it at your local game store.