There has been a lot of negativity and poison within gaming culture of late, but on October 25th, over 40,000 gamers set all that aside to do what we do best in a 24-hour gaming marathon in support of Children’s Miracle Network Hospitals. I am so very thankful to friends and family who helped me reach my goal, and so proud of my fellow gamers for making this event bigger and better every year. You can read more about the Extra Life campaign in my previous post.

From 8:00 AM on Saturday morning, I set up my command centre in the basement. I had snacks on hand, warm, fuzzy clothing, wine and energy drinks ready to go. After a morning outing with daddy, my daughters joined me, and together, we played games long into the night. Well, they tapped out at their usual bed time, after cuddles and stories from me, but they were awake again during my last hour.

So what exactly did I do for 24 hours? Thanks to Raptr, the majority of my game play was recorded for prosperity, so you can check out my profile online.

I started the morning off with Sa 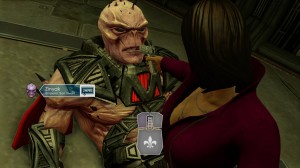 ints Row IV. I’ve been playing this game since its release, but the novelty eventually wore off. Still, I try to finish what I start, unless the game is just too tedious and unenjoyable. Fortunately, Saints Row IV still had a few moments of amusement left in it, including the opportunity to ride a dinosaur, which makes up for a lot, I tell you. 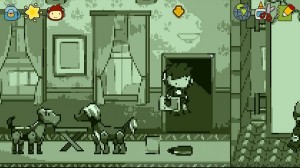 My daughters came home then, after an outing with daddy. They joined me with Scribblenauts: Unmasked. My nine year old is a fan of Scribblenauts: Unlimited, but she doesn’t like games where she can be attacked, no matter how often Batman can come in for the save. Her six-year-old sister hung out with me and the Justice League for a while longer, before eventually wandering off to find more food. My eldest returned to play Scribblenauts: Unlimited, and ended up taking over my marathoning for the next two hours.

Next up was The Elder Scrolls: Skyrim. I’ve been playing this game forever and each time I log in, I swear I’m going to focus on the story missions so that I can get it finished. But the story is kind of boring. For example, I spent about ten minutes with my character sitting at a meeting table while the rival factions bickered about…something. 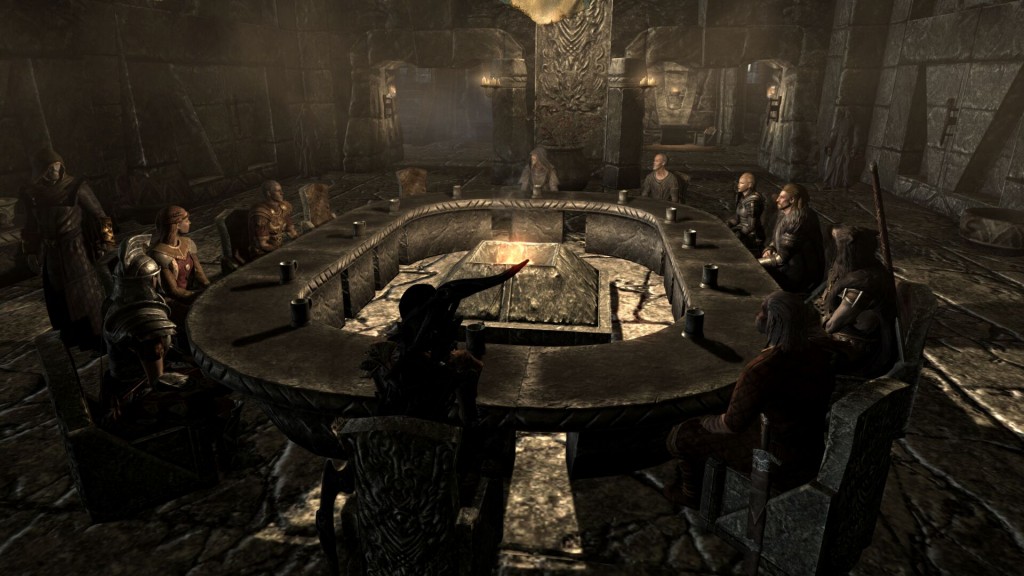 Honestly, I tuned out so I could pay attention to season two of Lost. Eventually, I ended up agreeing to something or other that involved bringing down a dragon. Of course everyone looks to the Dragonborn when it comes to dragonslaying…

From there I moved on to Kingdoms of Amalur: Reckoning. This is a game I started within the past few months, and have been meaning to get a little further into. I don’t have much time to play these days, so Extra Life offers a great opportunity to put in some solid game time hours. From what I understand, Amalur is a pretty big world, and the few hours I spent in it barely scratched the surface, but I did am getting better at the stabby stabby and earned a few achievements in the process. 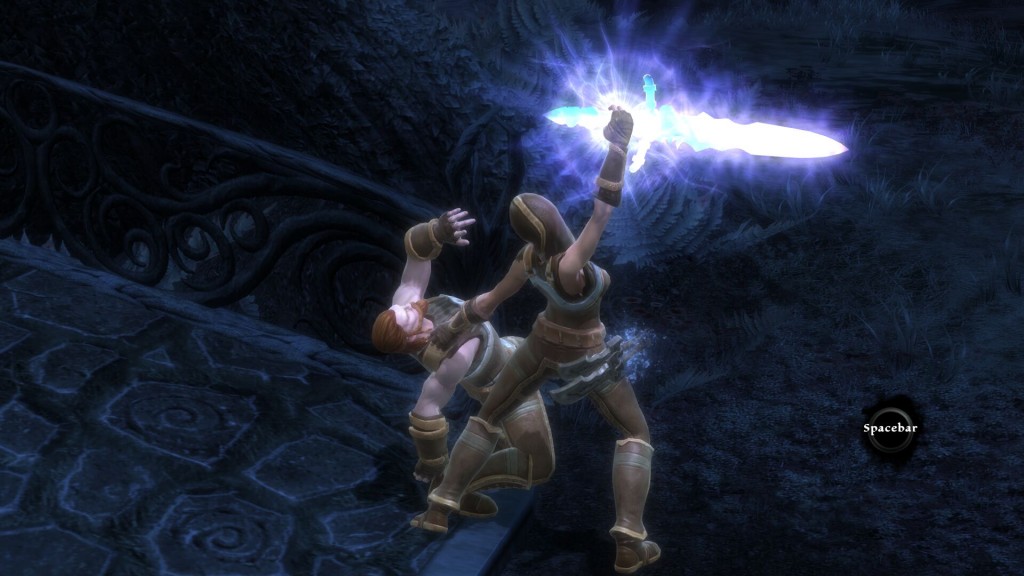 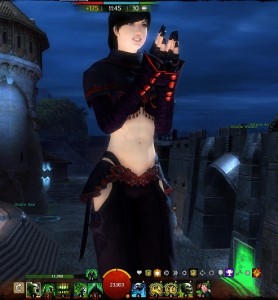 By then it was getting pretty late. I had a few glasses of wine going and thought I could manage I Have No Mouth But I Can Scream. That didn’t work out, so I tried Hate: An Analogue Story instead. Turns out, wine and exhaustion didn’t put me in the right mind set to handle the artificial intelligences in either game. One was cute and nice and offered to help me solve the mystery of a missing ship, while the other I already knew to be psychotic and sadistic, being created by Harlan Ellison.

So I opted for something easier on the brain, namely Guild Wars 2. The world of Tyria is constantly changing as the developers introduces more and more pieces to their “living story.” It’s been a while since I’ve visited, so there was a lot for me to explore, including the final pieces of the map to earn myself the 100% map completion achievement. I also got back into my crafting and money making routine, once again dipping into the lucrative world of dyes. Because everyone wants to look fabulous, and Guild Wars 2 offers a plethora of colours to make it so.

I shipped off the a galaxy far away and a time even longer ago in Star Wars: The Old Republic. The Galactic Stronghold expansion was introduced in the summer, so I spent a few minutes visiting my sweet new pad on Nar Shaddaa. Apparently, the process of decorating it is quite expensive and involved, but I didn’t bother to get into it. Instead, I focused on my Sith Assassin — yet another story I have to finish. 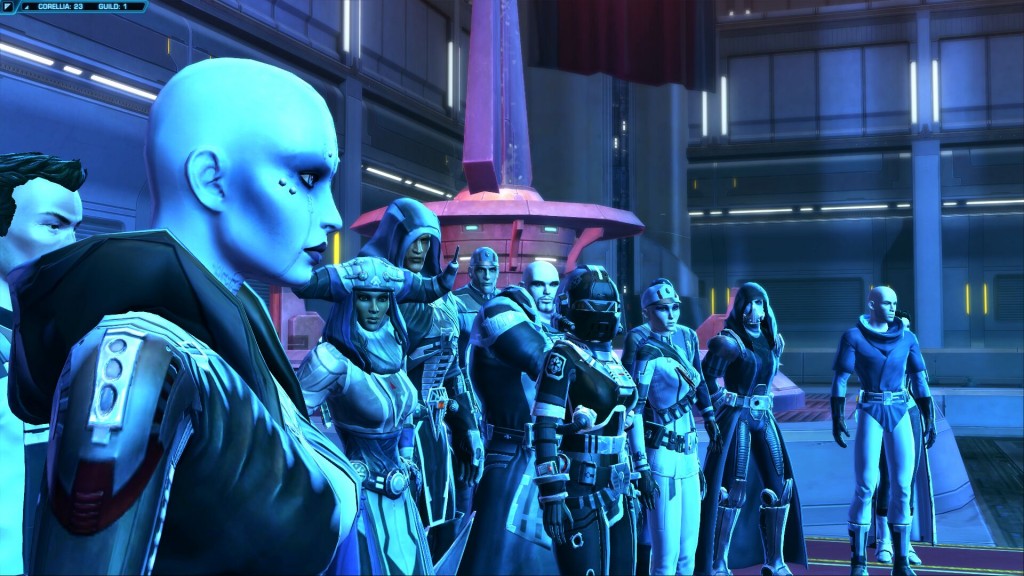 At 7:00 AM, I finally closed my laptop and, after kissing my daughters good morning, I ended my marathon with Candy Crush. By the time I ran out of hearts, I had reached the 24-hour mark and could proudly curl up under the blankets.