Felicia Day is Disappointed In You, #GamerGate, And You Proved Her Right

Last night, Felicia Day — creator of The Guild and all around awesome person — posted a gentle I’m Not Mad, I’m Just Disappointed to members of #GamerGate. Her post is thoughtful, sympathetic, and focused not on the hideous bile spewing from every orifice of the #GamerGate monster, but on the disappointment she felt in herself for allowing fear to keep her silent, and the disappointment that actions taken by a vocal majority have affected something she and so many others love so much and turned it into something to fear.

Would you like to see the most inflammatory line in the piece? I feel this is important, since it will really put what I tell you next into some perspective. Here it is: “Don’t let other people drive you away from gaming.” Divisive, right? Okay, how about this: “…personally I am terrified to be doxxed for even typing the words “Gamer Gate.”

Which is, of course, what happened almost instantly. In the comments to that same blog post. 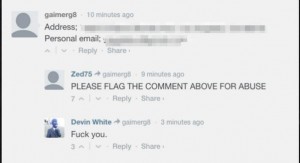 Compare to how two days ago, former Minnesota Viking Chris Kluwe ripped into everything he hates about #GamerGate, showcasing some of the most poetic, inventive insults I’ve seen outside a military base. It’s a little harder finding the most imflammatory statement in his piece, but here’s my personal choice:

You slopebrowed weaseldicks with zero reading comprehension and even less critical thinking skills who think an article claiming “Gamers are dead” is something bad? Fuck me sideways with a sandblaster.

But he was totally doxxed, too, right?

Nah but bro, he totally got challenged to a boxing match, because that’s what you do when you disagree with another dude: fisticuffs.

But it’s soooooooo not about attacking women, you guys. No misogyny here. That’s not how #GamerGate rolls.

#GamerGaters have already flooded the timelines of those speaking up with a variety of responses included but not limited to: “You can’t prove it was #GamerGate,” “we reported it!” and paranoid ramblings about conspiracy theories. Sure. There is totally a chance someone with the user name “gaimerg8” is not affiliated with the #GamerGate movement. It could just be a shell account created to discredit the super legit movement that is really truly about ethics, you guys. Or maybe the right to bear arms. Or being against rape apologists? I feel their core belief may be slipping slightly from their initial stance.

Let me clarify the situation, in case it isn’t already immediately obvious: women who speak up against #GamerGate get threatened with rape and murder. They are doxxed, providing a real fear that the threats can come to fruition.

Men who speak up against #GamerGate get challenged to a boxing match.

Tell me again how this isn’t about terrorizing and attacking women, #GamerGate. Actually, you know what? Don’t. I don’t believe a word of it.