Sims 4: Is It Worth Your Simoleons?

Sims live in a magical world where you can always be gainfully employed if you want to be, no one judges you based on race or sexuality, and everyone is a bit of a character. Sims fans are always hungry for more, and as one of those select individuals I have been super pumped for the release of Sims 4. The first thing I reminded myself when starting up the new game for the first time is that it is unfair to compare it to its predecessor, Sims 3. Sims 3 has been out since 2009 and has 11 expansions packs and nine stuff packs under its belt. So, Sims 4 was bound to feel a bit bare bones in comparison. Even with this reminder I did not realize quite how empty it would feel.

Like in every incarnation of this game, I started out in the Create-A-Sim (CAS) mode. Over the last few months EA has relied on Sims 4’s new and improved CAS system to sell the game: they even released the new CAS by itself as a teaser. I created the Sim version of me, and was impressed by the fluidity of options. And then deeply annoyed. The UI is much more visually appealing than in previous games, but it was difficult to find certain things. For example, Sim me is now rocking a full sleeve tattoo because I could not figure out a way to get rid of it. (Perhaps relatedly, I am now considering getting a full-sleeve tattoo in real life.)

Only seconds into the game I found myself irritated by the sudden gender difference. Sims have always been binary, female or male, but the player has a great deal of control over gender presentation, and sexuality has always been entirely fluid. However, one small thing in CAS really upset me. To choose a voice for a Sim the player uses a slider between two different qualities. In Sims 3 it was between wavelengths to make the voices deeper or higher pitched. Now, if your Sim is a male the spectrum is from “clear” to “brash” and if your Sim is a female it is between “sweet” and “lilted.” This was a strangely unnecessary gender differentiation that really pulled me out of the experience. 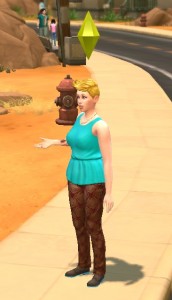 Once Al Rose the Sim was created, we went off to find a place to live and I was confronted with the next strange new difference: the map. Sims 3 had really won me over with its fully integrated neighborhood that my Sims could easily travel through, and the map had been a skyview of the town. Now the map resembles a blueprint and there are loading screens between every location. This feels like a major step back for the game and I missed the ability to follow my Sim on a stroll through the town.

A handy comparison picture I have made you.

However, Sims can now travel and move between neighborhoods, something they were not capable of doing in Sims 3 without losing all of their memories and connections, which promises much larger worlds once the expansion packs start rolling in.

I settled on moving into the small one bedroom house the tutorial encouraged me to pick and tried to spruce it up a bit with my leftover starting cash. While I may have had a harder time finding things in CAS, it was easier than ever to find things in Build/Buy mode (which are now the same mode instead of two different interfaces). Sims 4 offers a search option which made finding the perfect bookshelf for my Bookworm Sim fast and simple. It also made it very clear how many items are missing from this game. For instance, pools and dishwashers.

I thought at first this must be a new aquaphobia on the part of the developers, but was dissuaded from that opinion when my Sim went to take a shower. There are now several different showering options that lead Sims to different emotions, like being Inspired, or Flirty, as well as options to save time. This seems to be one of the only items that has this sudden power to change the character’s outlook on life in so many different ways, but maybe that is not so different from the real world.

In the interest of witnessing interactions in this new version I set my Sim out to meet new friends and find a lady-love. The first fifteen Sims we encountered were married, and my Sim is no heartbreaker, so we stuck with Friendly interactions for a while. The new social interactions interface is great. The categories are clear and easily accessed while still molded around the personality of my Sim. (She geeked out for a while about playing video games with another Geeky Sim.) Other Sims walked by without acknowledging me, but a few stopped and joined our conversation. This was definitely the highlight of the game. My Sim introduced herself to these newcomers while still maintaining a conversation with the people she had already met. It was very seamless and realistic. 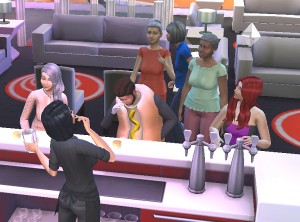 My Sim actually walked away during this group conversation.

My Sim traveled to a Lounge in town (through a load screen) to continue the quest to find love. There we met Iliana. Sim Al seemed to hit it off with her right away and the conversation was great, until my Sim realized how tired she had become. Very suddenly she left to make her way home, leaving Iliana babbling to herself on the sidewalk.

Sims 4 has made emotions the major determining factor of the way Sims interact with the world. It seems great and my Sim’s sudden desires, combined with the new multi-tasking ability, led to some interesting moments (like drinking juice while going to the bathroom). It also makes certain goals of mine much more difficult to attain, like getting into a relationship with Iliana. 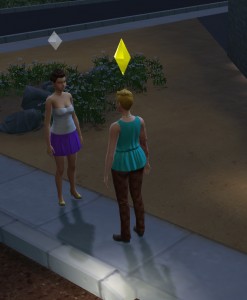 They met at night.

In an interaction between two Sims, both are experiencing overwhelming emotions. If the player is trying to hook two Sims up, hopefully the characters are feeling Happy or Flirty. My Sim seemed to be continuously Embarrassed. The slightest rejection from Iliana was enough to send her into a tizzy and make her want to hide under the covers (literally). It took much more work to get these Sims together than it ever has in previous games.

Career options seem to be the same as Sims 3, but part-time jobs are either missing or too difficult to find. When my Sim left for her first day of work as a Writer’s Assistant we traveled back in time to Sims 2. As in, Sims disappear off the map when they go to work again, instead of heading to one of the buildings in town. Also, I could not watch her mood or look in her inventory while she was not on the lot, which meant I sat picking at my nails while time passed until she was home.

After returning to the house my Sim soon felt “Bored,” and I have to admit I was beginning to feel that way too. Iliana showed up, over and over again, but the interactions between the two did not seem to be getting them very far. However, the now separate romance bar increased as steadily as the friendship bar and I have hope for the future of these two. If I can be patient enough to wait it out. Eventually I would like to see how the new interactions affect dynamics between children and their parents. Another thing missing from the game is the Toddler age group, which I am willing to bet will be added in as part of a future expansion pack. 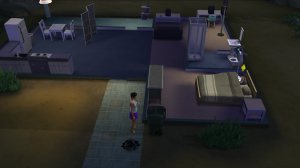 Sims still do weird things, like pick through my garbage after a date.

Inside jokes have always been some of my favorite things about previous Sims titles. There are long running obsessions with llamas and the juicy gossip of Bella Goth being abducted by aliens throughout the franchise. The timeline of families has also always been fascinating to witness between games. In Sims 3 players could witness the beginnings of some of the oldest and wealthiest Sim lines. I suspect there is a bit of that going on in the Sims 4, as my Sim met a Goth family member and Nina Caliente, a character from Sims 2, but it is not as clear as it was in previous editions. All in all, my advice is to wait to buy until at least one expansion pack comes out. There are a lot of bugs still (as is to be expected in a Sims game) and not enough content to make it worth the standard $59.99 price tag. It is a beautiful game, but it seems more like a revamped Sims 2 than a fresh face for the franchise.