In a twist on a medium that accepts high degrees of violence, two high school girls created a video game to confront the “menstrual taboo” surrounding women’s special time of the month. 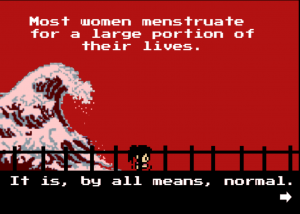 Andrea Gonzales and Sophie Houser met this summer at Girls Who Code Summer Immersion Program at IAC.  As a woman in tech, I have a lot of respect for The Girls Who Code organization which aims to inspire and educate young women in computing skills. As a part of their final project, Andrea and Sophie created the quirky 8-bit style video game Tampon Run, where the character “shoots” opponents by throwing tampons and replenishes their stock by jumping to catch boxes of tampons.

In the opening credits, the team admits that “although the concept of the video game may be strange, it’s stranger that our society has accepted and normalized guns and violence through video games, yet we still find tampons and menstruation unspeakable.”

Waiting in the airport for a flight, I played a bit of the game and found myself enamored. It’s true the graphics are more simplistic than the blockbuster Destiny, but the idea is fun. And it’s true as I was excitably chatty in the line to board, that some people around me were visibly uncomfortable hearing me talk about a first-person shooter tampon game.

If you have a few minutes on your hand it’s worth the play. Or as the Girls Who Code Twitter feed says

If you haven’t played @TamponRunner yet what are you doing with your life? Created by @GirlsWhoCode alums: http://t.co/T7aDGWo8a3