Previously on Tomb Raider Diaries: Lara Croft survives the shantytown attacks on her way to rescue her BFF Sam from certain, fiery doom at the Solarii temple. 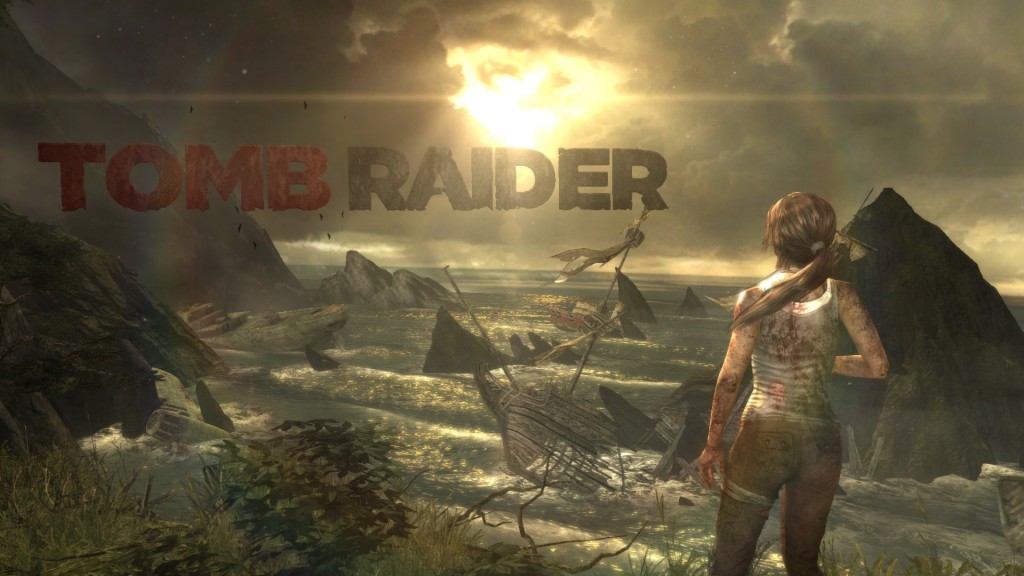 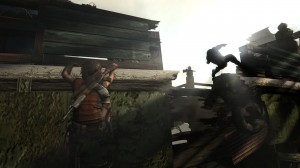 With Roth watching her back with a sniper rifle, Lara must cross the rickety bridge undetected and without doing all that falling stuff she seems to enjoy so much. Despite the cutscene building this up as a really difficult process, it, well, wasn’t, since Roth is an excellent shot and warns Lara to stop moving whenever necessary. Pity the point of view for the player couldn’t switch to Roth here, because I loves me some sniping. And it would have added some extra anxiety if Lara’s life was dependent on the player playing target practice.

Thankfully, Lara does not fall, though she has to do a bit of killing for herself for the last leg on the bridge. She gets inside and finds Solarii church already in session, with Sam tied to a stake and the evil Mathias prophesising up front. Forgoing all stealth options, the game takes over and has Lara walk out with her bow and arrow to kill exactly one guy. Personally, I think this would have been a great time to use either her rifle or shotgun, but I guess that wouldn’t have had quite as dramatic an effect, I guess. Consequently, Lara is captured and beaten and Sam’s pyre is lit anyway. Thanks for nothing, Lara. But hurray for divine intervention! The island’s perpetually gusting wind storm puts out the flames, proving to the Solarii that Sam truly is the chosen of Himiko, the Sun Queen. 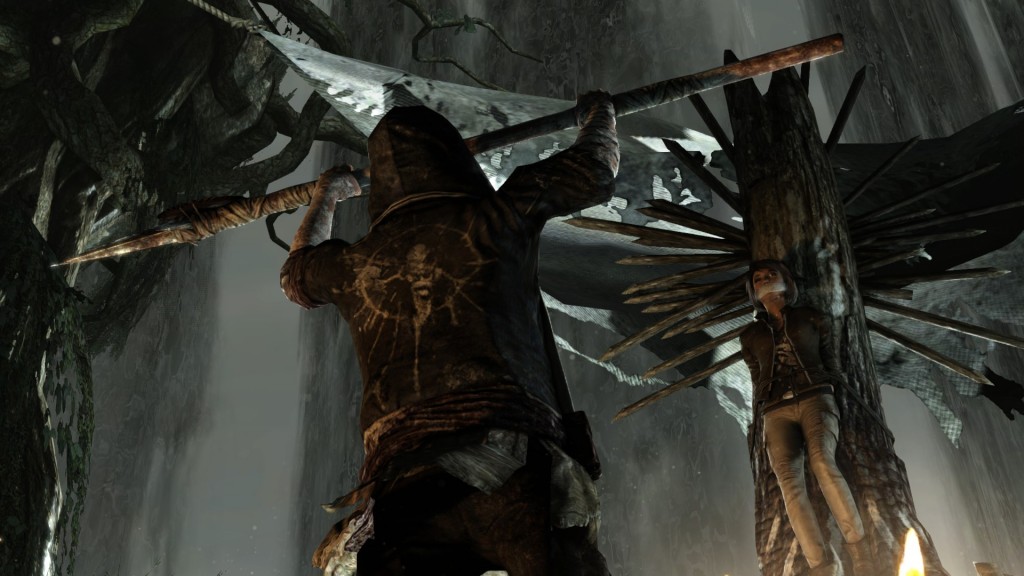 Sam is taken away and Lara is taken elsewhere by incompetent captors from whom she quickly escapes, falling into a nice river of blood. Within the catacombs beneath the temple, she discovers what happens to the survivors who don’t fall under Mathias’ rule: they are fed to the survivors who don’t survive the initiation. Apparently, if you can’t handle starvation and a few attacks from feral humans, then you don’t get invited to join the Solarii club and learn the secret handshake.

Lara manages to retrieve her bow and arrow, though not all her other weapons, which annoyed me since I had just started work on my rifle kill achievement. She does still have her lighter though, which is great since the dungeons are filled with explosive gas. Sometimes game logic has me shaking my head. Exactly why would I want to be igniting gas when I’m stuck in crumbling caves? 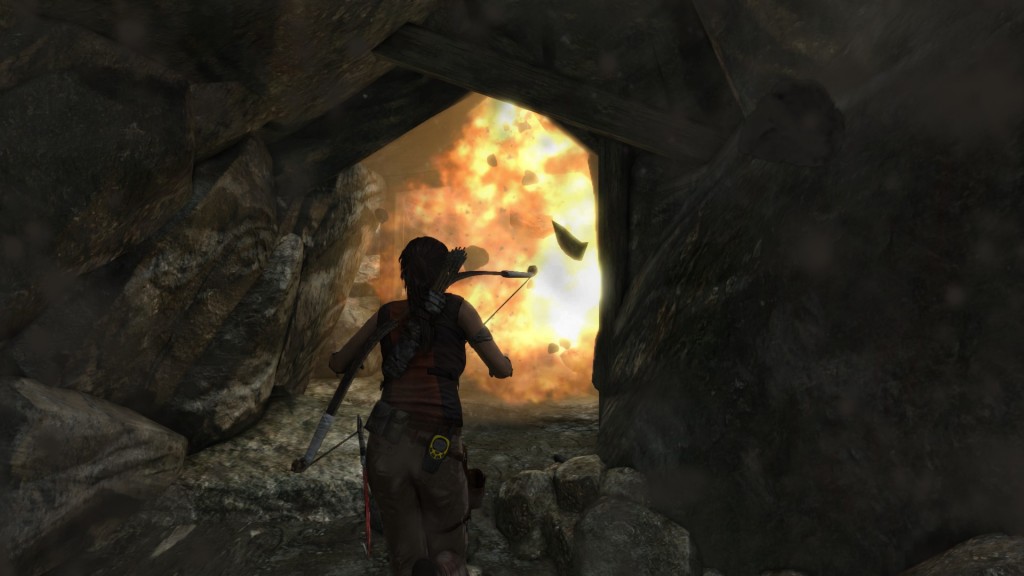 A few explosions later, Lara escapes the dungeons, and after some stellar stealth kills by me (I even have the “Opportunist” achievement to prove it!), she finds three of her crewmates, who are trapped in a hanging prison. How do we get them down? Why blowing shit up, of course! The explosion frees her friends, but leaves Lara trapped on the other side—which is fine since she still has to find Sam anyway. 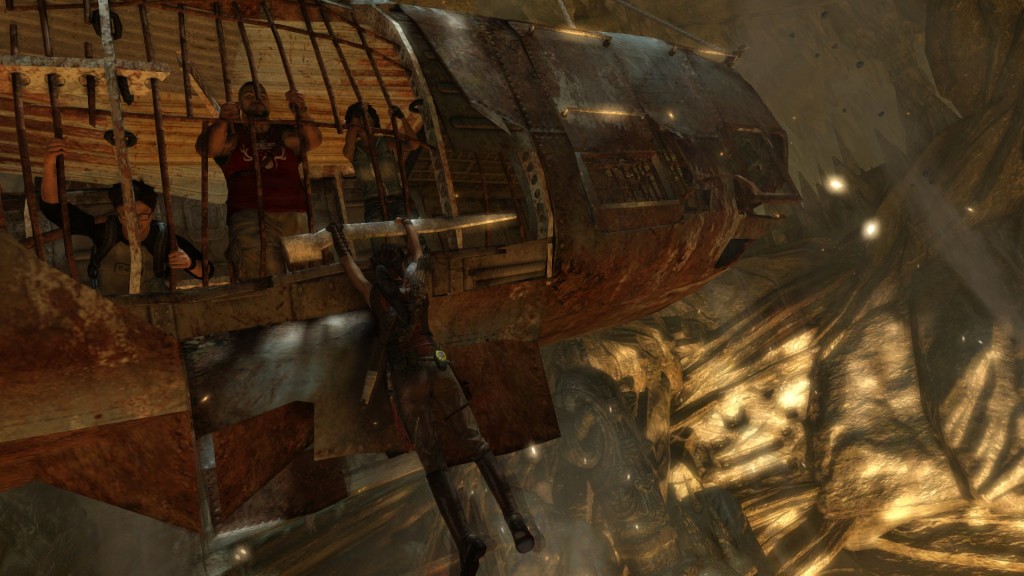 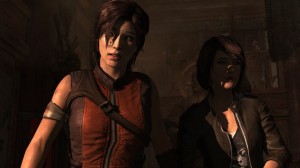 She bumps into Whitman, the archaeologist who is jealous of Lara’s new ideas. This seemed like a good place for some sort of shocking betrayal on his part, and I expected to discover that he was working with the Solarii. But he just ends up getting caught and possibly dying when things collapse later (turns out all those earlier explosions really aren’t good for the stability of an ancient temple). Once more, Lara finds Sam and this time is able to rescue her, though Mathias gets away. She and Sam are separated by falling debris and, once again, Lara must make her own way back to the crew.

Moving through another shanty town, Lara must fight off more Solarii, using whatever means necessary (in this case, I finally got all my weapons back so I could get back on my rifle kill progression). Then Lara finds a grenade launcher. <wicked cackle>

Lara finds Sam, then gets separated from her AGAIN. (Actually, she tells her to go on, BUT STILL). She warns Sam that they must not get on the chopper that is inbound to rescue them because the storm surrounding the island doesn’t like people leaving. Roth apparently doesn’t get the message and so, when Lara climbs across the burning rooftops, Roth is there in the chopper to save her. 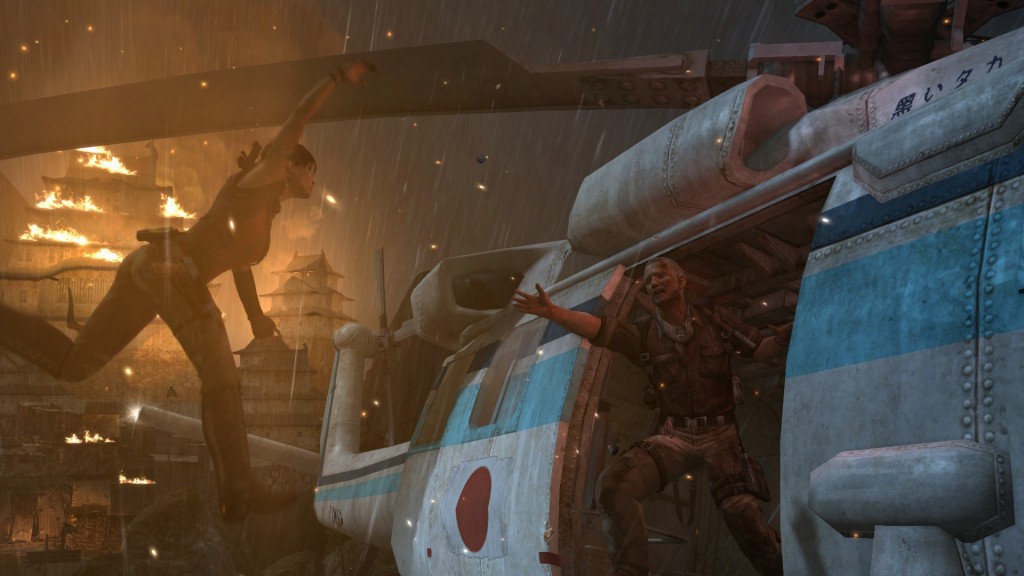 Thankfully, I managed not to fall this time.

Lara then orders the pilot to turn around to save her friends, apparently forgetting the whole “stay out of the chopper” thing, but no matter, the storm takes out the chopper, killing the pilot and leaving Lara unconscious. In an epic and moving cutscene, Roth drags Lara from the wreckage, and then protects her from attacking Solarii, taking a mortal wound. Lara begs him not to leave her alone but, ever the wonderful mentor, Roth’s final words are of encouragement:

You can do this Lara. You’re a Croft. 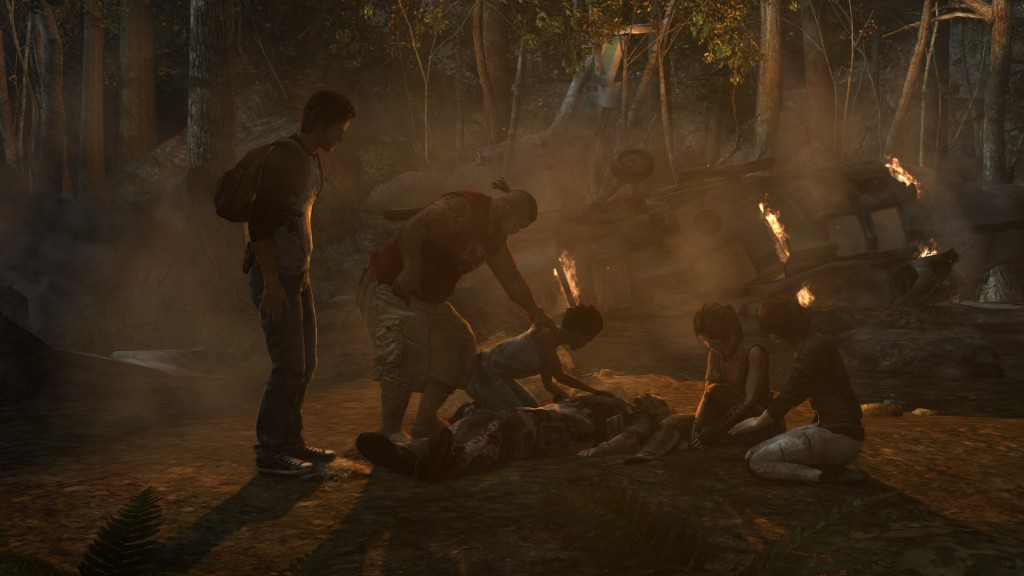 Reyes briefly blames Lara for her lover’s death, but quickly bucks up after the funeral and starts planning their escape. There’s a boat that she can rig, but Lara still believes the island will never let them go. Thinking back to Roth’s words, she pulls out a map, determining that to get off of the island she needs to go deeper in. She needs to find the source of the storms and stop them before everyone dies. 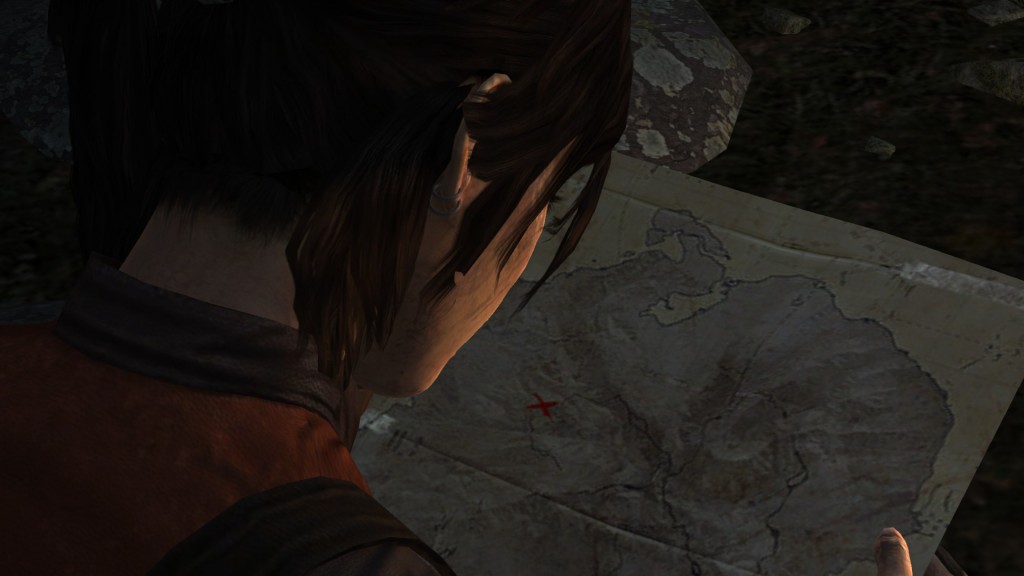 Next: X Marks the Spot