Once you’ve gotten through your first day or two of GenCon, you may want to level up your experience. You’ve wandered the Exhibit Hall for hours, photographed the coolest cosplayers (after asking nicely and stepping out of the way, of course), and pretended to be elves with a bunch of strangers. Now you’re starving because you were wise enough not to eat convention center food, parched for more than the water you’ve been downing all day, and wondering what to do now that the heat of an Indy summer afternoon has died down. Let’s start with food.

Oh, sweet food trucks, why are you not everywhere? These awesome conveyors of deliciousness line up outside the convention center for lunch and dinner. Christopher Helton has amassed a list of trucks, their menus, and their Twitter accounts over on his blog. Last year my favorite was the Spice Box, which included really great vegetarian options, and this year has some exciting options, including a gluten-free cupcake from Gigi’s. Be aware that the trucks get swamped at noon and after the Exhibit Hall closes at 6pm, so dining in the off-hours can save you a lot of time.

A lot of downtown places have themes and specials running, like the Ram’s gaming themed menu, but they can also be really busy. You can always order food to go from Noodles & Co or the Colt Grille, and last year one friend had a stack of sandwiches to get him through the day. Also be aware that some places have officially sponsored events, so you might meet up with Privateer Press at the Ram or find an informal gaming session has taken over the hotel bar. 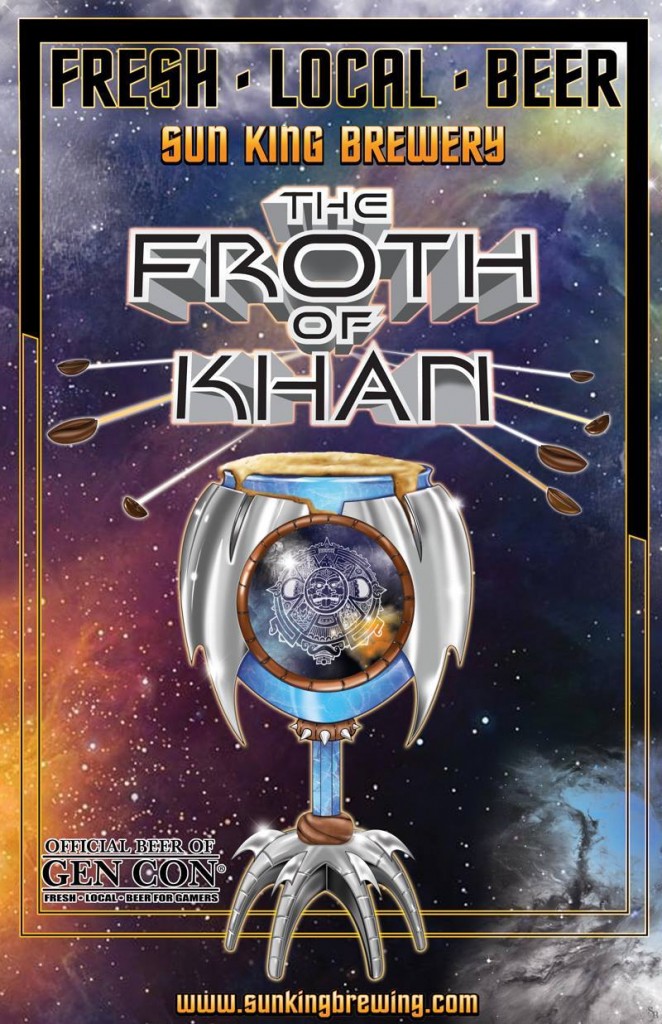 While you’re eating, something sudsy to wash it down with would be nice, wouldn’t it? Sun King Brewery makes the official beer of GenCon, and every year they hold a contest to name it. This year is a coffee infused ale called the Froth of Khan. It will debut at a the beer garden Wednesday night with entertainment by Five Year Mission and Sarah Donner. The Ram also has an English Brown Ale called the Everblight Ale, and all of the connected hotel bars are well-stocked. If you’re lucky, you might even run into an group of gamers having a swap of their favorite local beers from all over the country, so be sure to bring a bottle if you want to make new friends.

Now that you’ve feasted and slaked your thirst, it’s time to have more fun. While some introverts might be best served going back to their hotel room or unwinding with a small group after a long, exhausting day of interacting, other people will be looking for some excitement. 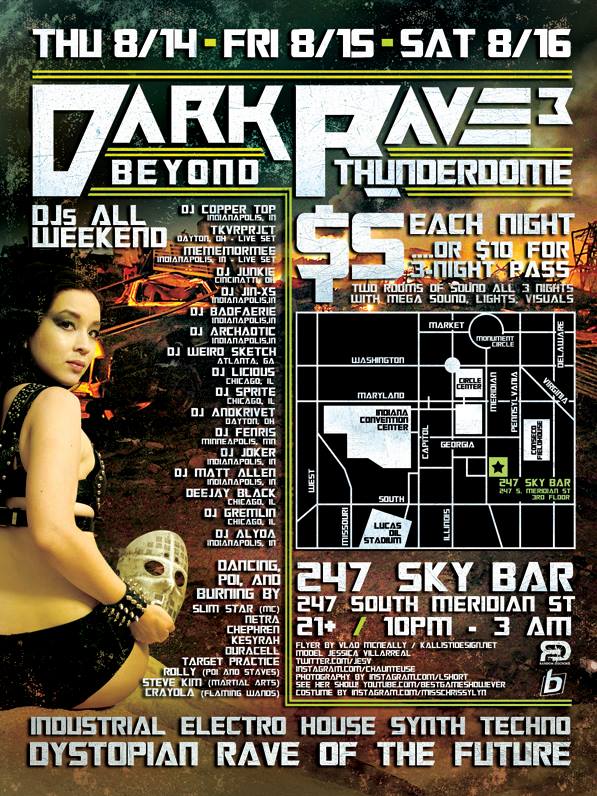 GenCon’s Saturday night dance has an 80s theme this year, so prepare yourself for the onslaught of leg warmers and acid-washed jeans. If your tastes run to the Goth/Industrial/Techno lines, Dark Rave 3 has you covered with a long list of DJs and a Beyond Thunderdome vibe. You might catch some of the Posthuman Studios guys there Friday night.

Games on Demand runs until midnight, and new games start every two hours. There’s a website so you can see what might be available, but you won’t know what games still have slots open until you’re at the table picking one out.

There’s a lot of pickup games at bars and hotel rooms as people meet up with internet friends, make new ones during the day, or just hang with their home group (you should also check Twitter for #GenConPUG). Since I tend to see GenCon as a time to socialize and game with friends of all kinds, I thought I’d share the time-honored tradition of showing off what’s in my game bag.

I carry a messenger bag everyday, but I swap it out for a backpack for cons. For GenCon, I’ll be carrying the following: 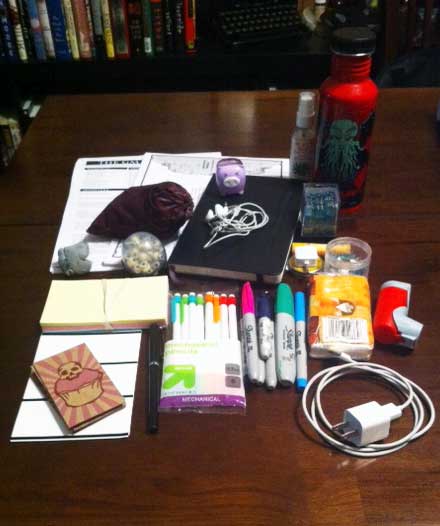 Those last items are the playbooks and notes for the games I’m running for Games on Demand. The notes are little custom zines I made that include material for each game, like lists of names for NPCs, maps, and a reminder on rules. Then I print them out on letter sized paper and staple them.

Some of the odder things I’m packing include a tube for posters/prints and a mobile credit card reader. GenCon is a sort of working con for me, so things like business cards and card readers may not apply to you. Players also don’t need snazzy gaming kits, although they are a lot of fun to put together.

That’s it for the pre-con coverage. I’ll be posting a wrap up when I get home, so I’ll see some of you in Indy!