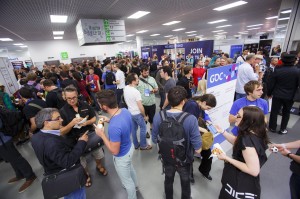 As one of the markets of UBM Tech, it’s not surprising that the session schedule look similar to what you might find at any other tech conference, but with a game spin: Fast Implementation and Powerful Data for Games (presented by Google), The Dangers of Metrics: How Suits Can Ruin Your Game and The Importance of Everything: A Crash Course in Design-Related Analytics.

Also on the schedule was the #1REASONTOBE session. The hashtag originally popped up 2012 as a positive response to the #1REASONWHY, compiling tweets about the sexism women faced working in the game industry.

Since then, GDC has hosted two sessions, both available in the GDC Vault, where speakers shared their personal stories about why they continue to work in the game industry.

‘Shaking with feels after #1ReasonToBe. I didn’t expect #GDCE to fire me up this way, but my word… time to do exciting things @_LadyCADE.’— Gemma Thomson (@RaygunGoth) August 12, 2014

I love how the room just won’t stop buzzing after #1ReasonToBe talk at #GDCEurope Include All and Prosper pic.twitter.com/xyov5EwEgL— Henrik Jonsson (@IonSwitz) August 12, 2014