Things to Play: Monster of the Week

Monster of the Week is a tabletop role-playing game that allows you to play as a character like Buffy the Vampire Slayer or Hellboy, hunting down monsters and saving innocents. Unlike Dungeons & Dragons and some other RPGs, Monster of the Week can take place in current times, so you can use modern technology like cellphones and rocket launchers alongside magic in the hunt for these creatures.

There are monsters out there. 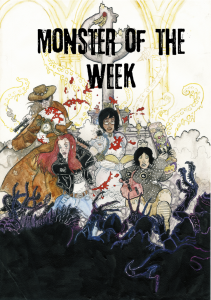 The Hunters are badasses. They are the archetypes, like how Buffy is the Slayer. So you decide if you want to go at the nasties with guns or fists, or you can be really good at magic, or maybe you’re the expert at all kinds of arcane knowledge. After looking over the playbooks and choosing some options, the players are ready to go. All of the information you need to make a character is on that sheet.

The Keeper comes up with a monster for the Hunters to kill, like a vampire or zombie, before you get together to play. She makes the hook, how the Hunters learn about the monster, and populates a town for the monster to lurk in. Some Hunters are part of monster-hunting organizations, others are part of underground networks, searching through hints on the internet for anything that might be the work of a monster. An easy hook is an article on strange happenings or website cataloguing monster attacks for those who believe.

Then the Keeper tells you the hook and describes the town and the people who live there, and the players respond by describing what their characters do and say. This back and forth, collaborative telling of a story of bigger-than-life heroes defeating foul beasts through epic feats is the meat of the game. There are Moves, which are little blurbs you use to decide what to do and which dice you roll to see if your move is successful.

Almost anyone can play this game, from the most inexperienced to veteran players. The manual uses the example of TV seasons to help the Keeper plan out the encounters, and that holds true for the players as well. Just pretend that you’re Buffy or Willow, Liz or Abe, and use your skills to stop the bad guys.

I love running and playing this game so much! The rules are simple and easy to remember, and there is nothing like the look on your friend’s faces when they crush that nasty monster and save the town. The game also explicitly states the relationship between players and the Keeper – you are their biggest fan. This makes the game feel a lot more collaborative and less of a competition than some other tabletop games. And who hasn’t secretly wanted to be Buffy, if just for 4 hours?

Ask your local game store to order it for you, or buy direct from the creator, Michael Sands, at https://sites.google.com/site/gamesteratlarge/