Comic readers and board gamers alike rejoice! Mouse Guard creator David Peterson has collaborated with Luke Crane to bring the game Mouse Guard: Swords & Strongholds, a game from the Eisner Award winning series, to Kickstarter. Peterson and Crane, who previously collaborated to create an RPG based on the Mouse Guard series, describe Swords & Strongholds as a light strategy game that can be played in ten to twenty minutes. 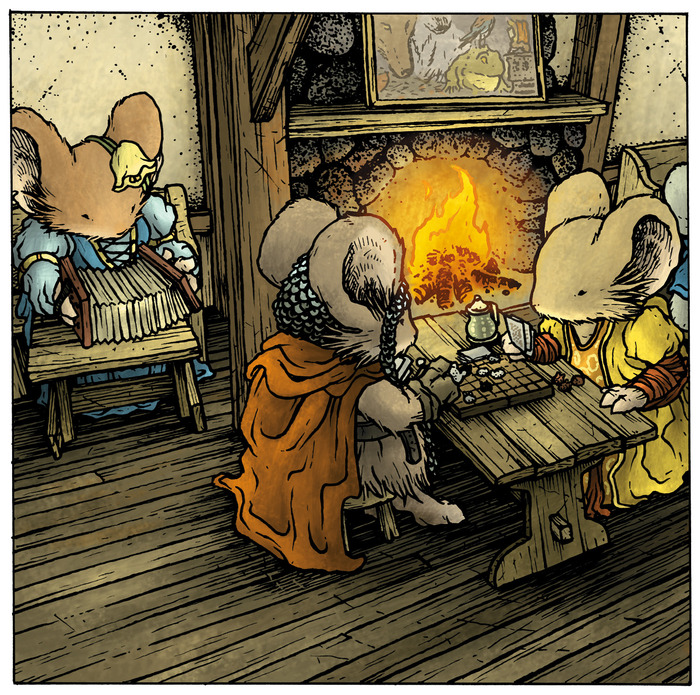 One of the most intriguing aspects of this project is that this is not a game based on the Mouse Guard comics, instead, it is a game that is played in the Mouse Guard comics. Characters can be seen playing it in multiple volumes of the series. The video pans over Peterson and Crane, ostensibly enjoying themselves as they play the game themselves. However, no explanation of game play is given, at least not in the Kickstarter itself. At a glance, the game play looks fairly straight forward. Players activate cards and move their mouse pawns across the grid, pushing their opponent’s pawns off the board. I surmise it may be something like Tsuro, with a card element added to diversify player’s strategic options.

Luke Crane (the collaborator with the most extensive game design chops) states:

We want to do a small production run with high quality components for Mouse Guard fans everywhere and we need your help to do it. We’d much rather show this game to you so you can tell us what you think than gamble on printing off a bunch and shipping them straight into distribution. David and I love our fans and we want you to be a part of making this game.

Unfortunately, the Kickstarter does not detail their plan for bringing this to fruition. With no explanation of game play given in the video, or anywhere else in the Kickstarter, I am left wondering if they have finished play testing this game, or if they will continue to do so with backer input. As a potential backer my interest is piqued, but as a board gamer (is that a thing?), I must admit that I am a little put off. I am not the type of board gamer who can read an instruction book and hit the ground running. Whenever I play a new game, I need to do just that. I need to play it. I need to make mistakes, get frustrated, laugh, gripe, and then play some more before I am able to “get”  board games I have never played before. But I do want some explanation before I embark on a game. The lack of game play review feels as though Peterson and Crane are selling Swords & Strongholds more as Mouse Guard merch, and less as a game. But I suspect it could easily sell itself on that association alone. Swords & Strongholds seems like it has a strong aesthetic and delightfully casual game play, but moreover, it even seems like it has the potential to be something good.

Rewards range from print and play versions of Swords & Strongholds to deluxe editions with cherry wood boards. The $100 backer tier rewards include original game art by David Peterson himself, which hit everyone who ever read any adventure with small mice that dared and dreamed of larger in life deeds right in the childhood. The beautifully rendered ink illustrations could easily be found at the beginning of each chapter of a Redwall book.

The goal for Swords & Strongholds is $18,000, and the Kickstarter concludes on August 7. Hard copies of the game are projected to be delivered in January of 2015. You can fund it here.