Previously on Tomb Raider Diaries: Lara raided the enemy bunk in hopes of accessing the communications room only to find it useless. Now she has to climb the radio tower itself in order to send out an S.O.S.

ON WITH THE SPOILERS! 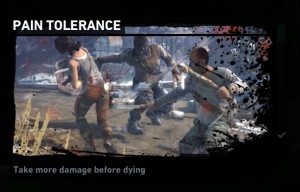 My only real complaint about this game has been how easy it is, which isn’t really a complaint. It’s not so easy that a skilled gamer would be bored, but it did make me more willing to accept my friend’s double dog dare to up the challenge to hard mode for my next adventure. In anticipation of much death and flail (not necessarily in that order), I upgraded Lara’s skills to increase her durability, then waded into the fray.

I’m pleased to report that I earned myself the “Predator” achievement for killing 50 enemies with the bow, and my headshot count continues to grow. The bad guys even complimented me on what a good shot I am, even as they rained bullets and Molotov cocktails upon me. Once I cleared out all the snipers, I faced down my first boss—a man inconveniently armed with a shield. I cursed my friends for daring me to switch to hard mode, and to the amusement of my husband, spent a reasonable amount of time running around the battlefield and flailing until I figured out how to stop him. Turns out that it was just a simple dodge and shoot process that quickly dropped the bad guy.

So much for “hard” mode.

I’d also discovered a bit of a cheat prior to that fight. Since I had found a campsite after killing off the early onslaught, Lara could sit down and relax. And she could fast travel, which means I can take her back to any of the other campsites she’s already accessed. Remember all those arrows left all over the place? I was able to hop back to replenish my stock. I also took the time to explore the one or two areas a bit, checking out some of the challenges. Each area has a collection of bonus objectives that one can complete for experience points. I burned some flags, shot down idols, and earned the “Unfinished Business” achievement for completing my first challenge.

This diversion took me far off course, but I finally got back on track with climbing the radio tower to call for help. This is another fine example of How-To-Cutscene, where it smoothly transitions between player control and the actual cutscene as Lara makes her way to the top of the tower. 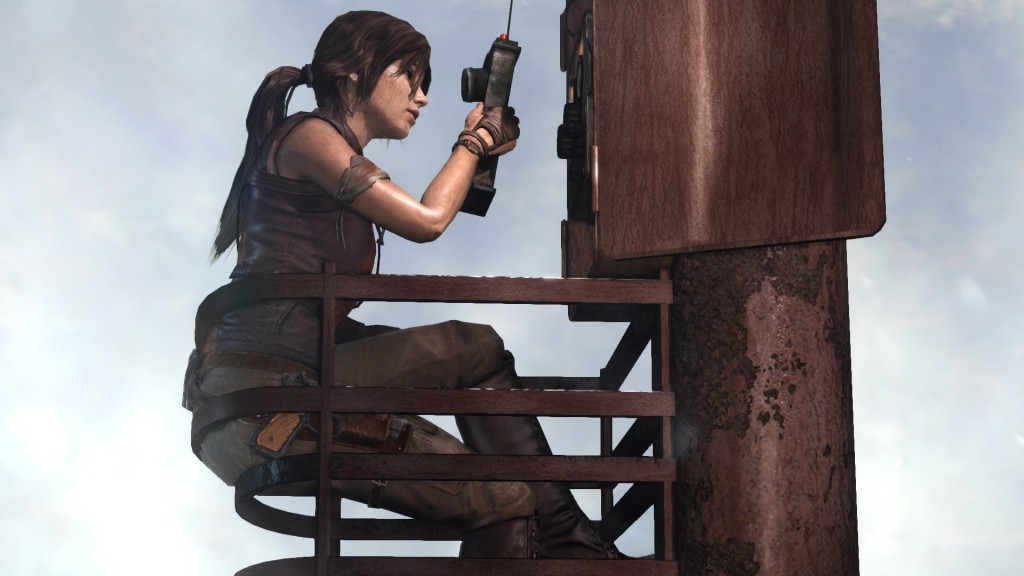 She successfully summons aid, but a sudden and seemingly very specific storm brings the arriving plane down right on top of her. Run, Lara, run!

I hit just about every obstacle on the way down, as Lara slid away from the burning plane. Fortunately, I lost nothing but my dignity during this process and managed to get Lara to limited safely. We attempted to save one of the plane’s survivors, but he was attacked and killed by the island’s inhabitants. They call themselves the Solarii, by the way, and are led by Mathias, whom we met earlier with Sam. I’ve found a few of his journals now, which clearly define him as brutal and deadly, and also more than a little crazy. He is intent on ensuring no one leaves the island alive who doesn’t fall under his command.

I gathered a few more important items along this journey, including a tool to light torches on the fly (great for blowing up fuel tanks to lead potential rescuers to the island), and rope for creating rope bridges and pulling down ropey things.

Lara failed to save the first survivor of the plane crash, but when she returns to Roth, they see another survivor in the distance. Once more, the game shows us what Lara Croft is truly made of:

Roth: “Sometimes you’ve got to make sacrifices, Lara. You can’t save everyone.”Lara: “I know about sacrifices.”Roth: “No, you know about loss. Sacrifice is a choice you make, loss is a choice made for you.”Lara: “I can’t choose to let him die, Roth.”

Silly Roth. Lara isn’t just about raiding tombs, you know. Apparently, she’s a bit of a hero, too.

Up next: I Need a hero