This week has been full of marvelous synergy for me.

I wrote a Retrospective on Superior Spider-Man; the day after, comiXology puts the title on sale!

A little background on how this review came to pass: Saturday the 26th, I went to dinner to catch up with an old friend. As is our usual routine, we caught each other up on what we’ve been doing, watching, playing, and reading.

I mentioned I’d just finished reading Geekomancy, Celebromancy, and the Side Quest novels about a geeky woman who discovers she’s a mage, and was excitedly describing the biracial heroine Ree Reyes and the fact that as the story begins she was working in a gamer-slash-coffee shop. 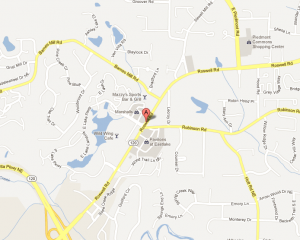 My friend enthusiastically said she’d go to such a place if it really existed—then her blue eyes got anime-wide as she suddenly remembered one does! Of course I had to ask for details.

It’s called Giga Bites Cafe, and it’s in Marietta, GA; the same town we were in at that very moment to have dinner. The boyfriend and I took a look right after we finished dinner.

It’s located in a cute little strip mall, but in an easily locatable spot. My boyfriend, The Spark, found it within seconds of us turning in.

The place is decorated in black and red, making it visually interesting. The walls are covered with game gear from every game you could think of—from Magic to Yu Gi Oh to My Little Pony (yes, really!). There are tables of different sizes and heights so you can eat and drink, or have a small intimate game, or a large multiplayer one. It all seems very well thought out.

The first thing I had my eye out for was how girl-friendly the place was. That’s always a concern these days, what with the whole “fake geek girl” nonsense, and the gatekeeping over who fandom is for. But walking in on a Saturday night, the place was rather busy; while it wasn’t too crowded to move, the ratio of women to men was not as bad as I expected. It might’ve been one girl for every two guys. But the women weren’t just there “as girlfriends,” obviously dragged along. They were geeks themselves, wearing geeky clothing, and participating in the games. There were, at the hour I arrived, no children under 16 there at all.

Joanie (pronounced “Jo-WAH-knee”) was the employee I spoke to. She was happy to 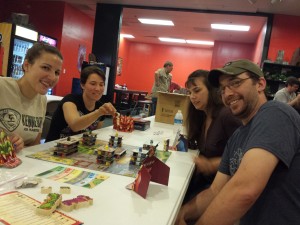 make me feel welcome, and invited us to sit and watch as she set up a demo game of RAMPAGE for some of the customers. Yes, that’s RAMPAGE as in the video game.

The demo game ended up attracting the attention of four out of the seven women there, leaving the two men playing in the minority!

It looks like a lot of fun, but has rules that are sort of involved, given you have to work out if the monster gets to keep all its teeth, and the proper occasions under which a monster can eat a car or a person. It also looks like a good game for a small child, but the pieces are small and fiddly and the rules a bit complex. So you’d want to play it with older children. If the game had had more “Duplo-sized” pieces, I could see it being fun for smaller kids. 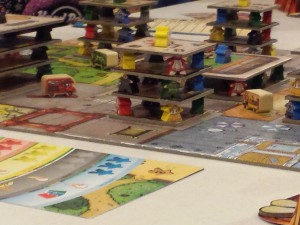 The menu is small but with room to grow. Typical coffee shop fare is easily come by. There are espressos and lattes, and hot tea and chai. For those who prefer cooler drinks there are several different varieties of smoothies, and two bottled beverage machines where one can buy a refreshing bottled water, Snapple, or soda. As we’d just had dinner I was too full to try any of the food, but that’s an excuse to go back and try it later!

There’s a breakfast menu and a lunch menu. Alas, very little by way of desserts and pastries.

Best of all, Giga Bites Cafe is open seven days a week and often until 1:00 am most nights, suiting the nocturnal tendencies of many gamers.

Its location is about 15 minutes north of downtown Atlanta, so it’s definitely a doable trip for someone who is local to the area. I live a little further afield, so it was closer to half an hour for me—but still worth it as a stop on my way home from visiting my friend. When I’m in that neck of the woods, I expect to go back.