In my previous adventures with Lara, we’d escaped the violent cult and found Lara’s mentor, Roth, in an abandoned village. He informed her that the wolves attacking him had also stolen his pack.

Of course they did. Because what wolf wouldn’t want a sweet sack filled with important band aids and communications devices? 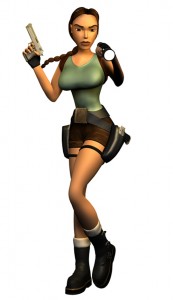 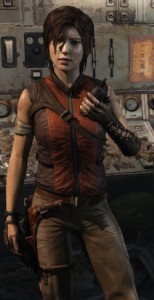 Before I got into my next gaming session, I decided to check out the downloadable content (DLC) options to better attire Lara for her adventuring. Because gaming fashion is very important to me. I was pleasantly surprised to discover that all of the DLC outfits actually covered Lara up more than she already was. Not that I had any problem with her breast-accentuating tight tank top, but considering her original butt shorts and boob tank of yore, I was impressed by the modesty AND practicality of the DLC selections. I chose the Sure Shot outfit and Lara and I proceeded down to the abandoned village.

Actually, the tiny village wasn’t entirely abandoned. It was filled with chickens, which, by gaming law, meant I had to kill them all. Don’t worry, I learned my lesson in Skyrim and made sure no one was looking when I slaughtered the chickens, lest I be maligned for my actions. My wanton avian violence did serve the important purpose of gaining experience and increasing Lara’s salvage supply.

I’ve been steadily collecting journals that deepen the mystery of Queen Himiko and the island’s current inhabitants. Mathias, the nice man who probably kidnapped Sam earlier, is the crazed cult leader, and those who don’t follow his rules die. There are also journals from an ancient emissary who visited the island to spy on Queen Himiko. He is slowly discovering that there is much more to her than anyone ever expected and he fears that he was the one under surveillance. Lara’s own journal automatically updates almost every time she makes camp, and, along the journey, she offers insight into the various artifacts and ruins found. The introspection and education happens often enough to be interesting, but not too often that it becomes an annoying interruption.

I definitely haven’t collected everything I can. I am not a completionist unless sufficiently motivated. Plus Roth is busy bleeding out. Lara has to have priorities.

High above the village, Lara finds the wolves’ den and, torch in hand, carefully creeps in, following the beeping of the stolen transmitter. The cave is littered with bones and half eaten carcasses, though, thankfully, no other backpacks are present. That would have been confusing. I expected to have to fend off several wolves, but only had to deal with one skittering by until, that is, I had collected my prize and turned to leave. For the record, my subsequent deaths directly correlate with my attempt to take screenshots for these diaries. I hope you appreciate my sacrifice. 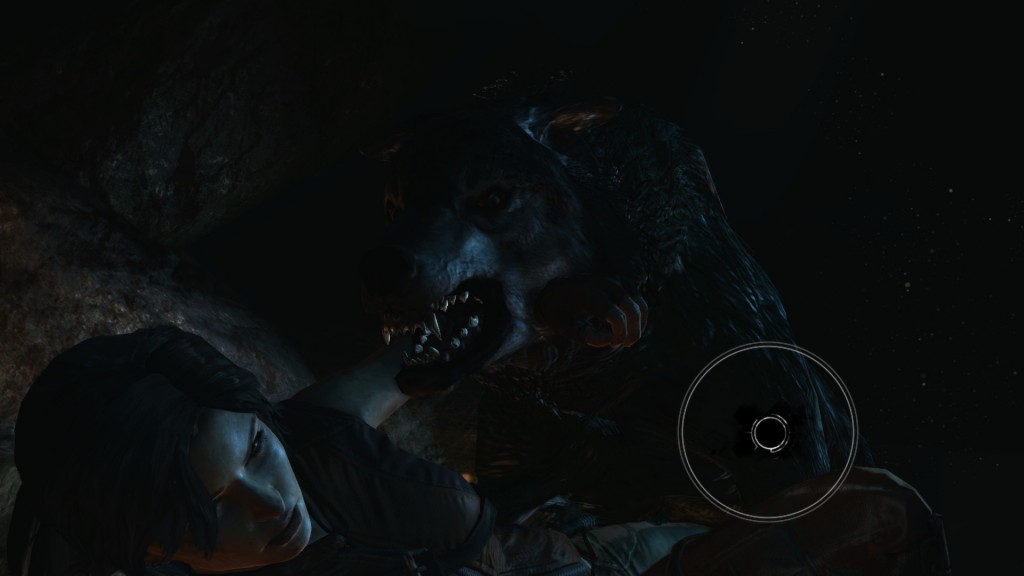 Getting back to Roth is much easier than getting up to the cave. The path up was a bit of a puzzle involving jumping in, out, and around the buildings and crashed plane wreck, but the path down was a zoom down the zip line. Roth wakes shortly after Lara patches him up and the game once again proceeds to please me with its narrative. Roth comforts Lara and tasks her with climbing the mountain to find the radio communications tower to send out an S.O.S. Lara doubts her abilities and her mental endurance, but Roth encourages her and it becomes obvious where her “you can do this,” personal mantra comes from. 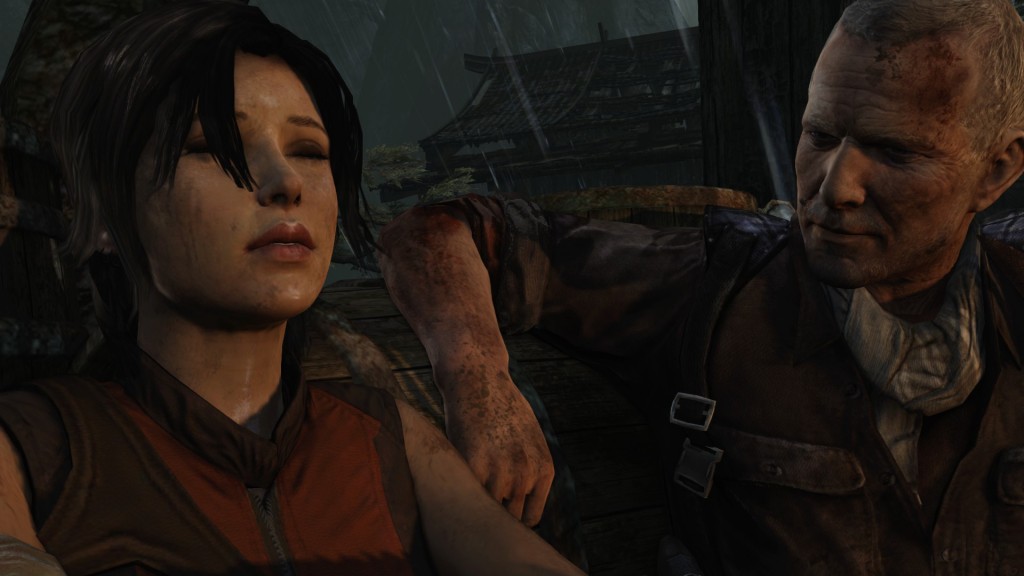 The scene is not only poignant because of the dialogue, but because of the physical interaction between the characters. Lara’s self-doubt is reflected in her facial expressions and Roth’s encouragement comes in affectionate, fatherly touches. 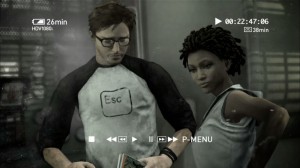 Father figure/daughter moment over, Lara makes her way back down to the village to kill more chickens and begin her climb with the new climbing axe Roth gives her. Survival Instinct reveals scalable walls, and the tutorial gives instructions on the process. Along the way, Lara finds another campsite where she reviews the camcorder again. We see Sam and her cameraman trying to film a short feature with Whitman, the lead archaeologist, and Jonah, the cook. Whitman is frustrated by these reality television interludes and petulantly flounces off, with Sam following to calm him. A few other moments show the crew of the Endurance in personal and even intimate moments, and more time is spent with Roth encouraging Lara in her archaeological endeavours.

Part way up, not so subtle markings reveal the first explorable tomb. The cave presents some small climbing challenges and obstacle puzzles, but, in the end, Lara finds her treasure and thus officially raids her first tomb. I was disappointed that there wasn’t actually anything in the tomb except extra experience and my second trophy, One Smart Cookie. 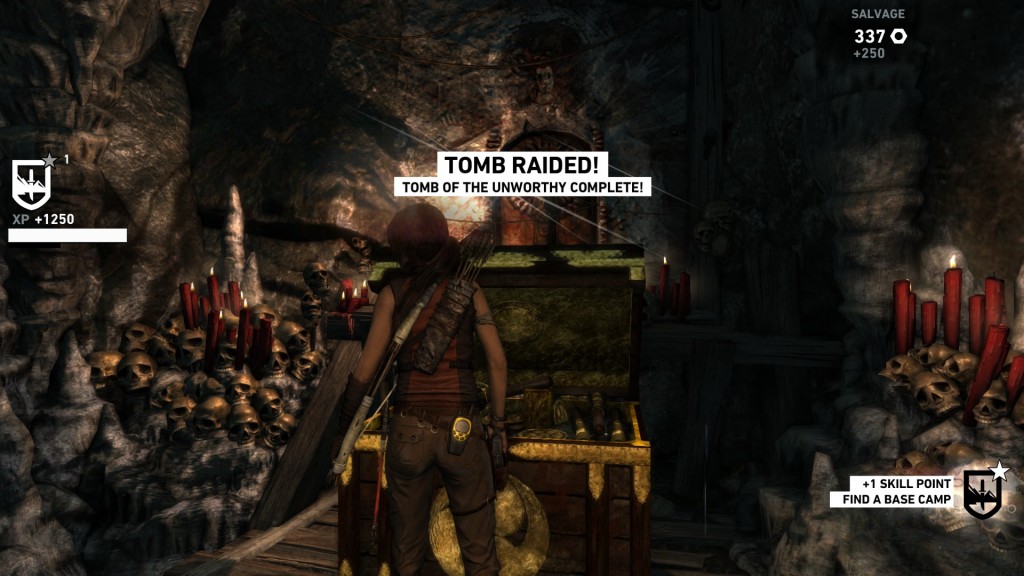 Continuing up the mountain, Lara faces a few more enemies. This is where I started to get suspicious about the game’s level of challenge. Thinking back to games like Mass Effect, I’d have been tossed into a battlefield swarming with legions of baddies by now, sink or swim. In Tomb Raider, dangerous encounters have been few and far between, with the game relying more on its narrative to move it along. It is, fortunately, not over-encumbered by cutscenes like Final Fantasy XIII, and while the game keeps moving forward at an acceptable pace, I’m surprised, though not necessarily upset by this. It is logical, based on the context of an island of shipwrecks and plane crash survivors, that there aren’t huge swarms of enemies around, however, other elements of the game play make it feel as if the game has been purposely designed on easy mode to ease in new gamers. For example, the player receives ample warning of imminent danger, often with enemies making noise in the rooms ahead. But more noticeably, Lara automatically crouches and arms herself, something other games require the players to do themselves. This does allow for a greater appreciation for the rich story and characters without overwhelming a potential new gamer with the controls. It does seem fairly easy for me as a reasonably adequate gamer, but not insultingly so.

Note that I wrote the above before walking around the corner into an ambush. Good thing Lara had just scored herself a new rifle to add to her growing arsenal. But now my friends have dared me to up my game and try this on hard mode. We’ll see how that goes in the next journal…

With the bunker breached, Lara finds the communications room but, low and behold, nothing works. She contacts Alex, the techie crew member of the Endurance, seeking advice. He tells her she has to climb the radio tower to get the S.O.S. out. 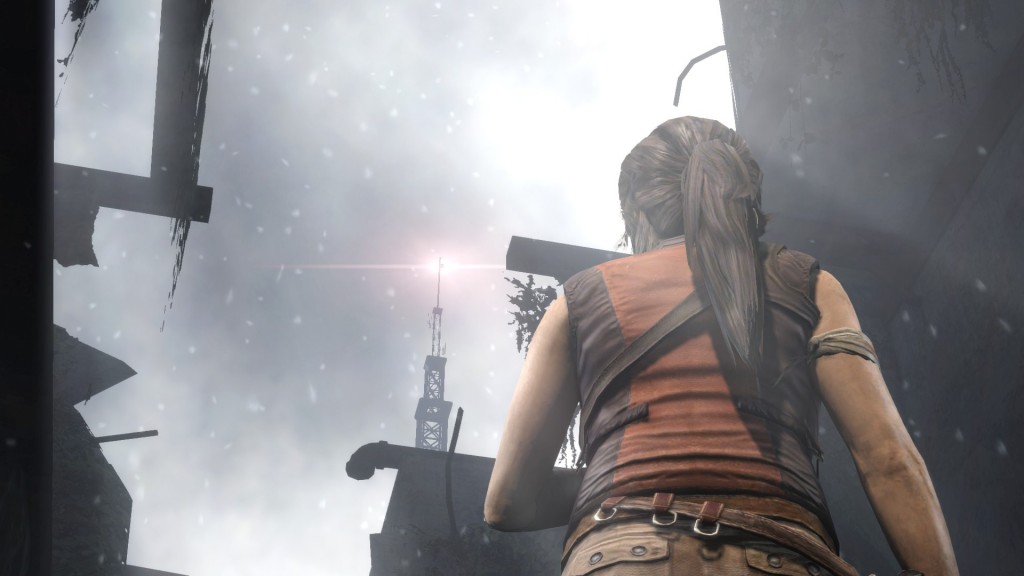 Up next: Hard Mode