My adventures with Lara Croft continue as I slowly work my way through Square Enix’s Tomb Raider game. Check out part one, In the beginning…

With the basic survival requirements of food, fire, and weapons satisfied, Lara returns to her exploration. She immediately finds her best friend Sam, which was surprising since I assumed the game would spend more time hunting for the other survivors of the shipwrecked Endurance. Sam has found a nice man named Mathias, of whom Lara is extremely suspicious. Both Lara and I diligently try to get Sam to shut up about Queen Himiko, whom Sam reveals is an ancestor. Lara’s research, and talking with Mathias has made Sam come to believe that the stories her grandmother told her about Queen Himiko are more than just legends, and she is very excited about finding the long-lost Sun Queen. Unfortunately, Lara falls asleep, and when she wakes, both Sam and Mathias are gone, though she does find several more members of the Endurance crew. They agree to split up to look for Sam, as well as Roth, another missing crew member who seems to be Lara’s mentor and has been encouraging her from time to time on the walkie-talkie she found earlier at the campsite. Unfortunately, there is no choice on who to go with. Lara gets stuck with Whitman, the lead archaeologist who isn’t fond of that upstart Lara and her new-fangled ideas but is very excited about their discoveries. Gameplay begins again and I got to do a bit more exploring. Someone keeps leaving quivers around, so Lara is never short on supply. I’d just as soon request infinite ammo in this case, as the constant supply of quivers, like Survival Instinct, makes the game feel too easy. In fact, I was playing on easy mode initially to allow for greater focus on the story and gameplay details for the sake of this journal but have since upped the difficulty to normal, because I’d really like more of a challenge. 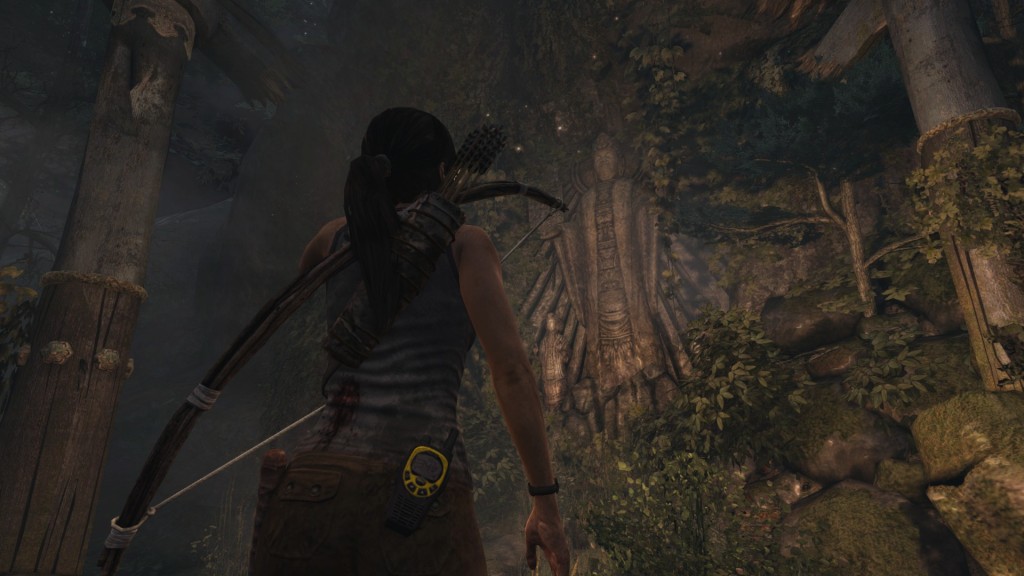 Whitman runs ahead and somehow misses all the wolves that come out to play with Lara. The tutorial is still active, so I learned to dodge. Sadly, Lara does not do combat rolls, but I did get to practice my archery and survived the encounters. I also get to start my salvage collection, which is used to upgrade equipment. I upgraded Lara’s axe in order to open the door of the temple that Whitman found and we headed inside to discover that Queen Himiko is still being worshipped on this island, it seems, based on the freshly lit candles. Their chatter reveals a bit more about the queen, who apparently possessed powerful magic.

“A woman wields that much power, it’s not long before it’s called witchcraft,” says Lara as they explore the temple.

On the other side of the temple, Lara and Whitman are captured by a group of men and this is where I finally got to participate in the controversial moment that initially had me refusing to play this game. Lara is bound and inappropriately caressed a few times by a particular man with obviously lascivious intent, but she is initially left alone when the rest of the Endurance crew stirs up trouble in the distance. Chaos ensues and Lara is able to escape. Unfortunately, this requires the use of stealth to avoid being spotted and killed. I’m so sorry, Lara. I should have warned you about my mediocre stealth abilities. Skyrim has taught me much, but it still takes me some time to warm up to the sneaky sneak, and so, Lara died a few times here. 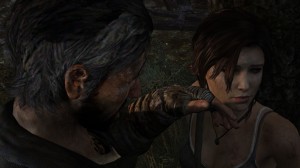 Once she makes it to the cabin, she is spotted by the man from earlier, who once again makes his intentions known with inappropriate touching. But as writer Rhianna Pratchett says, this is about Lara’s reactions and the game remains focused on her as she quickly tips the scales by going on the offensive. In the ensuing struggle, she kills him. And here is what Pratchett had really wanted to show us with this scene, and what the marketing team screwed up by giving us only the first half.

This is the first time Lara, who apologized to the deer she killed earlier, has ever killed a human being. And the scenes make it painfully clear that the experience greatly affects her. 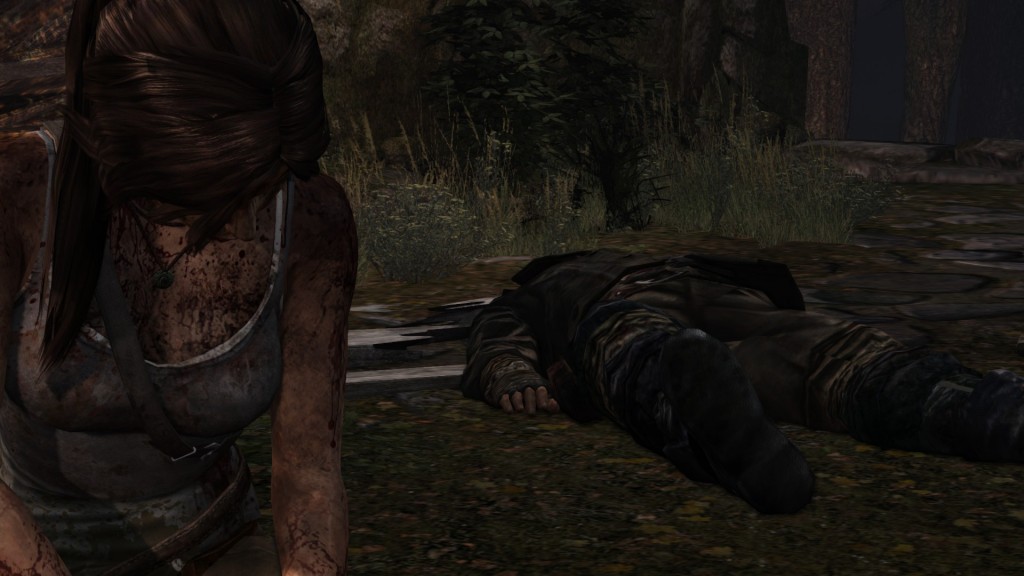 But Lara is, as she has proven by now, a survivor and she can’t let this hold her back. She takes her assailant’s gun and moves on, killing a few more people as she goes. Of course, the game is going to require killing from now on, but I appreciate that this defining moment had a bit more follow up when Roth contacts her and comforts her when she tells him she had to kill people.

Now with a gun or bow in hand, tutorial moments appear again as Lara works her way through the burning temple area, picking off potential attackers. My stealth skills improved and I got to make use of the mad archery skills I developed in Hunted: The Demon’s Forge and honed in Skyrim. Headshots for everyone!

I’m disappointed that I have not yet been rewarded for my efforts. Where are my achievements, game? I mean… not that I only play games to get that all encouraging pat on the head from Raptr, the social gaming site that posts all my gaming accomplishments and fosters friendly competition between gamers with passive aggressive messages that let us know when our friends are beating us. But seriously, I normally don’t play games just for achievements, but they are a nice carrot on a stick since they were made mandatory in 2008. Some games offer achievements for simple accomplishments like making it through a chapter, while some reward the completion of unique and challenging tasks. Tomb Raider’s achievements fall somewhere in between and are actually kind of dull in that the majority of them are simply completing a large number of objectives, such as killing and looting 5000 victims. Most of these can be achieved through the course of gameplay, but, by their nature and the high number required, it seems like many of them will require a bit of a grind, which serves the ulterior motive of making the game last that much longer. That said, game progression has steadily rewarded me with behind the scene unlocks for artwork and other interesting aspects of the game design. 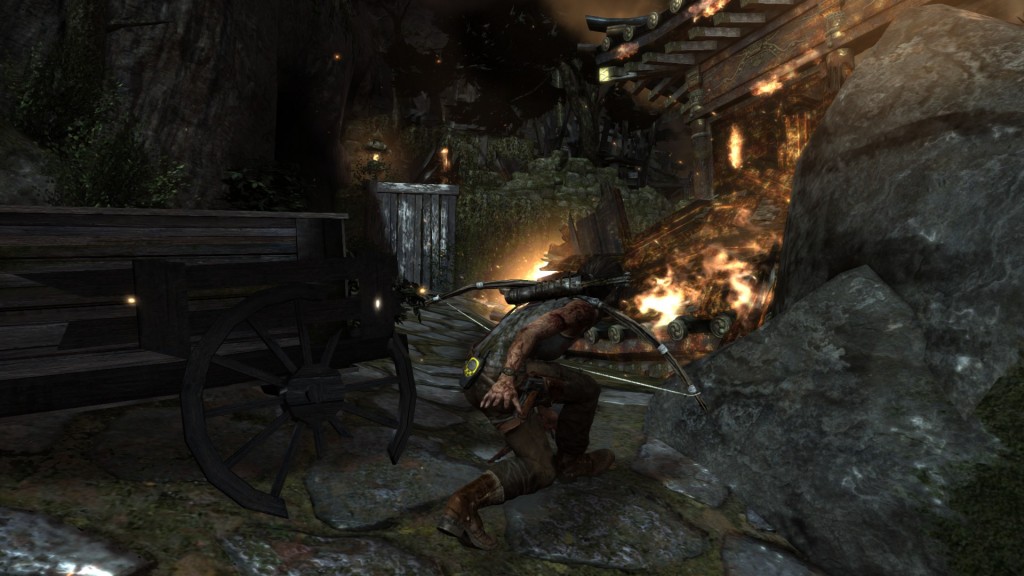 Next up: Into the wolves’ den
Previously: In the beginning…