Tomb Raider Diaries #1: In the Beginning…

I had not intended to play Tomb Raider. I wasn’t much of a Lara Croft fan, beyond Angelina Jolie’s portrayal of the character in the movies, and more importantly, I didn’t want to play a game whose marketing team thought they’d win me over with an attempted rape scene as part of its initial promotion.

A few factors have since changed my mind, including Gail Simone writing the new comic–which she’d initially refused to do because she felt the same way I did about the game. After playing it, she quickly changed her tune. Then there this trailer, followed by a Steam sale, to seal my gaming fate.

As a result, April has become Tomb Raider Month in my house, and I will be sharing my playthrough here. I’m just a few hours in and am already willing to forgive SquareEnix’s poor promotional decisions, assuming they have learned their lesson.  In fact, I’m quite enjoying it for many reasons, which will become evident as this journal progresses. So far, I’d be pleased to recommend this to other gamers, especially those who, like me, were sceptical.

Be warned: Here be spoilers!

The game opens with Lara in her cabin on the Endurance, a ship that immediately suffers some sort of accident that results in a shipwreck. Lara is trapped in her cabin but is rescued before drowning. “You can do this,” she tells herself, before attempting to leap across a huge gap. She misses the mark and falls into the water. She makes it to land and sees her crewmates above on the island, but before she can get to them, she is knocked unconscious by a mysterious assailant.

Actual gameplay begins with Lara hanging upside down in a spooky, candlelit cave, surrounded by human skulls and other symbols of cultish goodness. I am playing on a laptop and am glad I impulsively purchased an XBox controller recently, as the game can be very demanding at times with the necessary commands. I’m sure it’s not impossible to achieve the same results with a mouse and keyboard, but I believe certain fast-paced action games are better enjoyed with a controller, so I finally gave in and bought one. 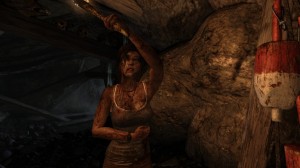 I like the tutorial process employed; simple instructions that pop up to provide the necessary information, without handholding. Lara can light fires to free herself, reveal access ways, and otherwise affect the environment in order to achieve a particular goal. “Survival Instinct” is apparently a new feature to the Tomb Raider games. It offers a muted screen, with certain elements highlighted, such as enemies, animals, and items that can be interacted with, as well as showing which direction Lara needs to go. It’s similar to Batman’s “Detective Mode” in the Arkham series of games, although this feels a bit like cheating, since, unlike Batman, Lara herself doesn’t have any gadgets to actually allow her to access this mode. Technically, I could avoid using Survival Instinct if I wanted more immersive gameplay, but I’m not that hardcore. Plus I’d spend a lot of time running in circles if I didn’t have something to point me in the right direction (and even then, I remain orientationally challenged. HINT: Don’t follow me).

Early on, I encountered my first puzzle. Survival Instinct did come in handy to reveal the items for interaction, but I appreciated that the player still has to use their head to figure out exactly what to do to remove the obstacles.

“You can do this,” is Lara’s mantra as she presses on through a frightening scenario that culminates in a seeming attack from a man whom I believe was saying he was trying to help her. But, understandably, Lara’s reaction to being grabbed at inside a cave full of apparent human sacrifices is to escape, bringing down big chunks of the cave along the way.

I managed to make it to the safety of a recently abandoned campsite with only one death (it was a really big boulder, okay?), where Lara finds evidence of the Endurance’s survivors, including a camcorder. She plays the video and we learn that Lara is part of an expeditionary team in search of the island of Yamatai as they follow the legends of Queen Himiko. 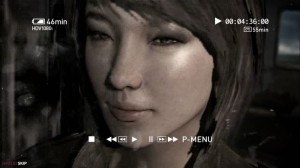 Despite the initial bad press for Tomb Raider, I had heard that it did well with character development and it actually passed the Bechdel Test. The recording is the first confirmation of that, as it begins with Lara’s best friend Sam behind the camera, saying some pretty motivational things to her friend, who is not feeling too confident in her role on the expedition. I’d like to think that Sam’s pep talking helps Lara in the next moment where she holds her ground against the lead archeologist, Whitman, on the belief, backed by her evidence, that the team should pursue the Dragon’s Triangle, rather than the usual path that predecessors have failed to find anything on. The captain of the ship backs her on this, and Whitman storms away. 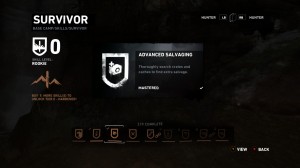 This campsite is also the first opportunity to work on Lara’s skills. Remember that this is a young Lara Croft and, while she knows the basics of what to do, she lacks the confidence and experience of her future self. So the player gets to progress her through three categories: Survivor, Hunter, Brawler. I’ve started with the Survivor tree, which increases the salvage and loot options available, which I figure will be necessary for future upgrades.

Next up, Lara must find herself some food. After pilfering a bow from a corpse and finding arrows that are conveniently littered all over the place, I got to go hunting and bagged my first innocent animal. Sorry Bambi, but Lara’s gotta eat. I also learned that the innocent wild life can be a bit violent and deer will try to run you over if you get in the way of their terror-filled rampages. 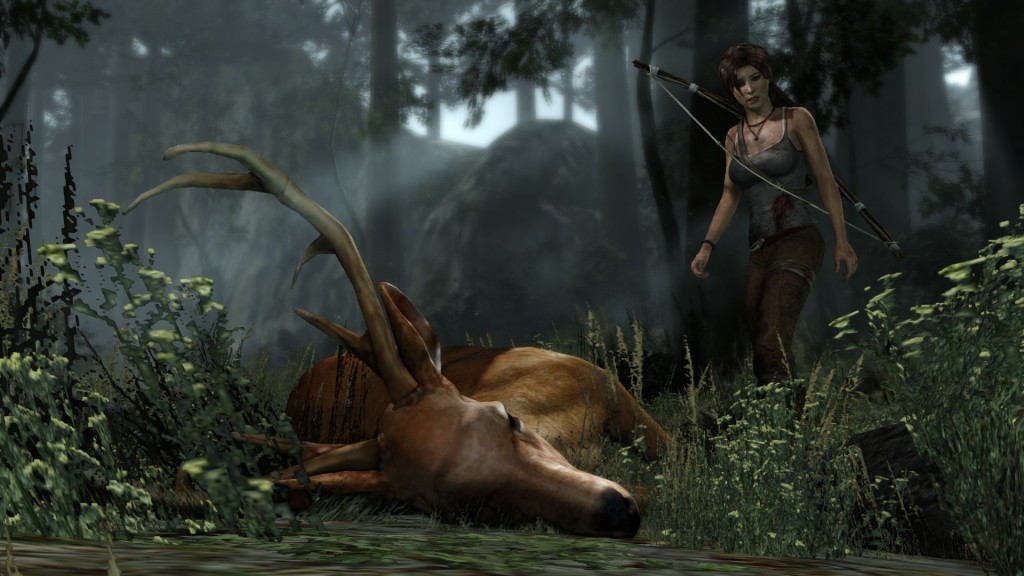 I also got to explore a bit. This isn’t an open world game, but there are a lot of nooks and crannies to peek in, where challenges and lore items can be found. I found Sam’s journal and once again was impressed with her support for her friend as she spoke about her hopes for Lara’s future.

Up next: It’s way better in context